It is no secret that when a drought arrives, the threat of wildfires is sure to follow. This year, these wide-ranging severe drought conditions are occurring primarily in the plains states and most of the western portion of the country this year and is on track to follow previous record-setting years.

According to the National Interagency Fire Center, 46,091 wildfires have burned a total of 5,907,288 acres nationwide this year, making it the sixth-highest year for both acres burned and number of fires in the U.S. over the past decade. But it is critical to note that the traditional heart of the wildfire season is yet to come.

Peak wildfire season runs from August through November, and the next three months will be key in deciding whether 2021 is another record-breaking year.

Traditionally California tops the list for states most in danger of wildfires because of its location and population. However, the resiliency of is often measured as how fast one can recover from a catastrophe. For example, when 800 homes are destroyed in California, the market can recover faster due to a large housing inventory in the state. But if 800 homes are destroyed in Wyoming, it may take years for those people to recover due to its limited stock of homes.

According to a report by CoreLogic—a global property information and analytics company—in states like Wyoming and Idaho, the number of homes at risk is a larger fraction of the total number of homes in the state. If a larger portion of the population is displaced at a single time, recovery times may be elongated, fewer local workers might be available—and likely distracted rebuilding their own lives— and fewer hotels and housing options may be available to outside workers due to local populace demand.

“There’s no denying a state like California is at severe risk for wildfire destruction every year, as seen in the ongoing Dixie Fire,” said Tom Larsen, Principal of insurance solutions at CoreLogic. “But it’s important to acknowledge that not all communities and their catastrophic events are the same, and the road to recovery can look drastically different. Resilience is often measured as how fast you can recover from a catastrophe—and the deeper the wound, the longer it takes to heal.” 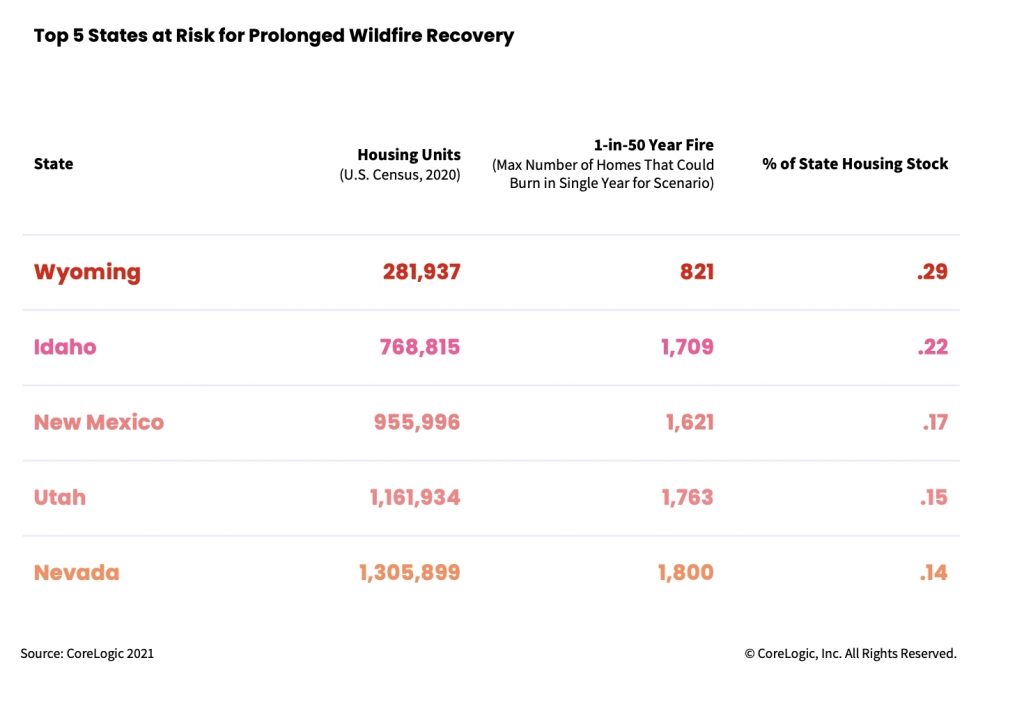 This may also lead to longer recovery times as a larger portion of the population may be displaced because their homes were destroyed,” the report said. “This snowball effect may lead to more recovery work, fewer available local workers as they are distracted with trying to rebuild their own lives, and fewer hotels and housing options available to outside workers because the local populace needs them.”

To help mitigate potential losses, the report said that a number of parties need to come together in order to help reduce future losses.

“Looking ahead, insurers, city planners and homeowners each play an important role in reducing the devastating impacts of wildfires and they can work together to mitigate future events,” the report said. “While these natural catastrophes are often unavoidable, they can be prepared for. By equipping clients with the latest data and insights, CoreLogic’s goal is to help its clients better inform homeowners of their risk and accelerate their recovery.”

CoreLogic used its Wildfire Risk model to identify a 1-in-50-year fire scenario in each of the 14 wildfire-prone states (13 western U.S. states plus Florida) to understand how many homes would be at risk of being damaged in a wildfire at least once in 50 years (the average length to which residential homes are built to last, via building codes). CoreLogic compared the number of homes at risk of damage from a 1-in-50-year fire (an extreme event) to the total housing stock in each state to determine the communities that have the most economic risk from wildfire. Wildfires that devastate large numbers of homes are infrequent. The number of homes included in the 1-in-50 year fire analysis has a 98% probability of not being exceeded in a single year (or the maximum number of homes that could burn in a single year)