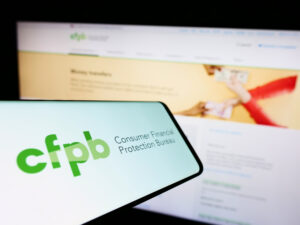 A coalition of seven banks and trade groups have filed a lawsuit against the Consumer Financial Protection Bureau (CFPB) and CFPB Director Rohit Chopra citing abuse of statutory authority. The lawsuit was filed in the U.S. District Court for the Eastern District of Texas.

The suit further challenges the CFPB by calling into question the Bureau's funding structure.

“The Consumer Financial Protection Bureau is operating beyond its statutory authority and in the process creating legal uncertainty that will result in fewer financial products available to consumers,” said U.S. Chamber EVP and Chief Policy Officer Neil Bradley. “The CFPB is pursuing an ideological agenda that goes well beyond what is authorized by law and the Chamber will not hesitate to hold them accountable.”

In their filing, the plaintiffs make clear that the groups and their respective members fully support the fair enforcement of the nation’s nondiscrimination laws, yet “they cannot stand by while a federal agency exceeds its statutory authority, creates regulatory uncertainty, and imposes costly burdens on the business community. Especially when the CFPB did not even give the public an opportunity to raise concerns through the APA’s notice-and-comment process. This Court’s intervention is needed to ensure that the CFPB is accountable to legal constraints, the rule of law, and the public as it pursues an aggressive agenda with far-reaching implications for the American economy, Plaintiffs, and their members.”

According to the CBA in a release, “the CFPB revised its examination manual to reflect a new belief that the ‘unfairness’ prong of the UDAAP definition can be applied to conduct the CFPB deems discriminatory. Throughout the course of many decades, Congress never used the statutory concepts of ‘unfairness’ and ‘discrimination’ interchangeably. Rather, they are distinct, and each has a well-established meaning and scope of application.”

The plaintiffs are urging the court to intervene to ensure the CFPB is held accountable to the rule of law and consumers.

"The CFPB's decision to dramatically expand its regulatory reach without any input from the public was not authorized by statute and has significant implications for consumers, banks and the broader financial markets," said ABA President and CEO Rob Nichols. "This is a step we did not want to take, but it was a necessary step given the extraordinary actions of the CFPB."

In a statement, the Texas Bankers Association commented: “… we ask the court for injunctions: setting aside the CFPB’s March 2022 update to the manual; preventing the CFPB from pursuing any exams or enforcement actions based on the March 2022 interpretation of its UDAAP authority; and ordering the CFPB to cease accepting funds in violation of the Appropriations Clause.”

“The CFPB is one of the most transparent regulatory agencies, and voluntarily publishes exam manuals laying out how it will assess banks’ compliance with the federal laws Congress charged the Bureau with enforcing," said the CFPB in a statement to DS News from a Bureau spokesperson. "The CFPB’s exam manuals allow banks to ensure they are following the law, and help make certain that consumers are receiving the fair and equitable treatment they deserve.”

"People need to understand what this is really about,” said National Community Reinvestment Coalition (NCRC) President and CEO Jesse Van Tol in a release. “These large corporate interests are only suing because the CFPB has been so effective in protecting consumers from discriminatory and unfair practices. NCRC stands with the CFPB in support of its effort to ensure that all financial products are provided to consumers are fair and non-discriminatory."

Previous: Economist: 2023 Will Bring a ‘Significant Shift in Power’
Next: Priscilla Almodovar to Serve as Fannie Mae CEO