ATTOM has released its Q3 2022 U.S. Home Affordability Report showing that median-priced single-family homes and condos remain less affordable in Q3 of 2022 compared to historical averages in 99% of counties across the nation with enough data to analyze. Numbers continue to be far above the near 70% of counties that were historically less affordable in Q3 of 2021, —marking yet another high point reached during the country's 11-year housing market boom.

The report also shows some potential relief for homebuyers as the portion of average wages nationwide required for median major home-ownership expenses has dipped slightly from 30.9% in Q2 of 2022, to 30% in Q3.

"Homeownership remains largely unaffordable for the majority of homebuyers in the majority of markets across the country," said Rick Sharga, Executive VP of Market Intelligence at ATTOM. "While home prices have declined a bit quarter-over-quarter, they're still higher than they were a year ago, and interest rates have essentially doubled. Many prospective homebuyers simply can't afford the home they hoped to buy, and in many cases no longer qualify for the mortgage they'd need." 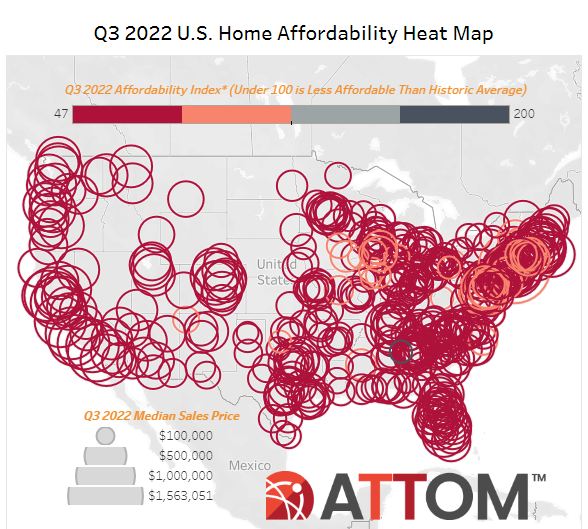 The third-quarter figure does remain above the 28% ceiling lenders generally like to see when issuing a mortgage. It's also well above the 23.4% level from a year ago. However, the current decline in the portion of wages needed to afford the typical home nationwide marks the first quarterly improvement in almost two years and comes as the median national single-family home price has taken a rare third-quarter fall. The latest median value of $340,000 is down 3% from Q2 of 2022 –the first Spring-to-Summer decline since 2008.

The report determined affordability for average wage earners by calculating the amount of income needed to meet major monthly home ownership expenses —including mortgage, property taxes and insurance— on a median-priced single-family home, assuming a 20% down payment and a 28% maximum "front-end" debt-to-income ratio.

Compared to historical levels, median home prices in 574 of the 581 counties analyzed in Q3 of 2022 are less affordable than in the past. The latest number is up from 568 of the same group of counties in the second quarter of 2022, 398 in the third quarter of 2021 and just 284, or less than half, two years ago. The increase has continued as the median national home price –despite dipping quarterly– is still up 10% over the past year, while average annual wages across the country have grown just 6%.

Affording a home remains slightly out of reach for many Americans, but may begin to get easier for average workers amid a time if significant headwinds stall or even reverse a boom in prices that dates back to 2012.

As prices remain historically high, home-seller profits have surpassed 50%, and homeowner equity keeps rising across the country. As homebuyers continue chasing an extremely small supply of properties for sale, elevated demand has helped push the national median home price up over the past year faster than the pace of wage growth.

Meanwhile, home sales are down as mortgage rates have steadily climbed this year from just above 3% to near 6% for a 30-year loan, driving up expenses for buyers. Higher interest rates, growing inflation, elevated fuel costs and a declining stock market all strain the finances of prospective homebuyers, and threaten to stall or reverse a nearly unrelenting rise in home values that began when the market started recovering in 2012 from Great Recession of the late 2000s.

Amid those mixed trends, major home-ownership expenses on typical homes are still unaffordable to average local wage earners during Q3 of 2022 in 400 —or 69%— of the 581 counties in the report, based on the 28% guideline. Counties with the largest populations that are unaffordable in Q3 are:

Home prices still up at least 10% annually in slight majority of country, but dip quarterly in close to halfMedian single-family home and condo prices in Q3 of 2022 are up by at least 10% over Q3 of 2021 in 302, —or 52— of the 581 counties included in the report. However, typical values have dropped from the second to Q3 in 230 —or 40%— of those counties, which has contributed to the nationwide decrease.

"Home price appreciation has slowed dramatically in most markets –and there are even price corrections in some areas– as home sales have declined significantly over the past few months," Sharga said. "But mortgage rates have risen more rapidly and dramatically than they have in several decades, and as a result a monthly mortgage payment today is 35-45 percent higher than a year ago, making affordability too much of a challenge for many would-be buyers."

Average annualized wage growth has surpassed home-price appreciation in Q3 of 2022 in only 93 —or 17%— of the counties in the report. The largest of those counties include Cook County, (Chicago), Illinois; King County (Seattle), Washington; Santa Clara County (San Jose), California; Alameda County (Oakland), California, and Philadelphia County, Pennsylvania.

Share of wages needed for home ownership declining, but still exceeds 28% in two-thirds of the nationThe portion of average local wages consumed by major ownership costs on median-priced, single-family homes has decreased from the second to Q3 of 2022 in 45% of the 581 counties analyzed, helping to drop the level nationwide. However, the amount needed remains more than 28% of average local wages in 400 —or 69%— of those assuming a 20% down payment. That is up from the 66% figure in Q2 of 2022 for the same group of counties, and from 43% in Q3 of last year.

Counties that require the largest percentage of wages are:

Aside from Kings County, New York, counties with a population of at least 1 million where major ownership expenses typically consume more than 28% of average local wages in Q3 of 2022 include:

Counties where the smallest portion of average local wages are required to afford the median-priced home during Q3 of this year are:

Counties with a population of at least 1 million where major ownership expenses typically consume less than 28% of average local wages in Q3 of 2022 include:

Historic affordability inching upward but remains worse than historic averages in nearly all countiesAmong the 581 counties analyzed in the report, 574 —99%— are less affordable in Q3 of 2022 than their historic affordability averages. That is virtually the same as the 98 percent level in the second quarter of 2022, but up from 69% a year ago. Despite that, historic indexes have improved quarterly in 45% of those counties, helping to boost the nationwide index for the first time since late 2020. Data also found that among the 581 counties in the report, only seven —1%— are more affordable than their historic averages in Q3 of 2022. That number is down from 31% a year ago, and 51% in Q3 of 2020.