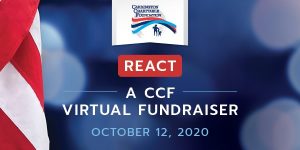 The Carrington Charitable Foundation, a nonprofit associated with the Carrington Companies, has their own veteran-focused Signature programs aimed at creating mobility, stability, purpose, and prosperity for those returning from post-9/11 conflicts, according to its mission statement.

This year the charity's annual golf tournament, which benefits the aforementioned project, is going virtual, making it more accessible to all Carrington affiliates, the company said. Tickets for the event are available here.

CCF representatives say that this year, like many nonprofits, it is "challenged by the environment created by the pandemic."

This event will be its primary fundraiser for 2020.

"The veterans we assist through Carrington House and our other signature programs are counting on us to make this event a success, so we can keep our promises to the veteran families we assist," said Shelly Lawrence, Executive Director, Carrington Charitable Foundation.

"Since the program began, Carrington House has helped 24 veterans and their families find their forever homes through remodels, rebuilds, renovations and land purchases. CCF has raised more than $21 million since the foundation's inception. In 2019, the CCF Golf Classic event raised more than $1.8 million. More than 260 golfers participated; and the event culminated in a dinner and auction attended by more than 500 people—the largest attendance in the event’s nine-year history ... Right now, there are three more homes in progress."

According to the event page, Melancon, now a snowboarder and motivational speaker, was severely injured during his second deployment to the Middle East, when his truck was hit by an Improvised Explosive Device (IED). He was injured severely enough to be immediately evacuated out of the country. For the next two years, he underwent two dozen intense reconstructive surgeries ... That's just (the beginning of) one of several veterans' stories.

During Monday's virtual event, participants will hear from three vets who are recipients of Carrington House homes, as well as the CEO of The Honor Foundation, Matt Stevens, a beneficiary of CCF’s Veteran Support program.

Even though the full event will not be presented as usual this year, Lawrence says the charity still has important commitments to honor with our Veteran Heroes and their families. "Ongoing donations and support are critical to building our combat wounded veterans the homes they need to heal and return to life post military service."

Please visit this page to purchase (pay-what-you-can/$50) tickets to the event.

The silent auction is in progress here, and more general information about the effort is available here.