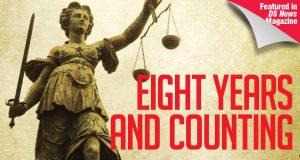 September marked the eight-year anniversary of the conservatorship of Fannie Mae and Freddie Mac. Amid the Great Recession and the subsequent housing crisis, two of the housing industry’s giants found their financial conditions severely damaged to the point of being unable to fulfill their mission without assistance from the government. Since that intervention, controversy has circled the entities and little has been done to reform a conservatorship meant to only be temporary.

According to FHFA, a key component of the conservatorship is the commitment of the U.S. Department of the Treasury to provide financial support to Fannie Mae and Freddie Mac to enable them to continue to provide liquidity and stability to the mortgage market. In that spirit, the Treasury Department has provided $189.5 billion in support. This includes an initial infusion of $1 billion into both Fannie Mae and Freddie Mac at the time of the conservatorship and an additional cumulative $187.5 billion investment from the Treasury Department.

Brian O’Reilly, President at the Collingwood Group, a Washington, D.C.-based business advisory firm, believes that the original goals or the conservatorship could be categorized in to four parts.

“The first was to support mortgage supply through the crisis, in other words to ensure there would continue to be access to mortgage credit,” says O’Reilly. “The second key goal was to insure the holders of agency debt and mortgage backed securities (MBS) didn’t sustain credit losses, because that would have dramatically negative impacts on the financial system potentially world-wide because of who the holders of that MBS and debt were in 2008. I think that the third goal was to ensure that the entities were returned to a state of financial health. I’ve heard someone use the phrase return to a level of soundness and solvency.”

The fourth goal was that the GSEs should be taken out of conservatorship at some point.

“In other words it was never intended that you would see conservatorship in perpetuity, and I think the phrase some others have used is that it was intended as a time out while the key stake holders and government determined what an appropriate outcome was or new status was,” says O’Reilly.

Looking back at these past eight years of conservatorship, it is natural to wonder whether the goals originally intended have been fulfilled or if they have changed over time. O’Reilly feels that the goals of supporting mortgage supply through the crisis and insuring the holders of agency debt and MBS didn’t sustain credit losses have been satisfied today.

“The mortgage supply and liquidity was maintained, and the holders of agency debt and MBS didn’t suffer,” says O’Reilly. “As a result, the value of full faith in credit in the world was maintained.”

Though some these of the goals seem have been achieved, with regard to O’Reilly’s third and four perceived goals, he states that the conservatorship has done nothing but come up short.

“While the entities have returned to a condition of financial stability, in that we’re in a period where they are both returning money to treasury, I don’t think by any measure you can argue that they’ve been returned to a sound and solvent footing,” says O’Reilly. “In an environment where they’re not permitted to retain and build capital, I have a hard time believing that if you took this example out of the context that these would be the certain set of circumstances that you would say are logical or appropriate.”

So if elements of the conservatorship are considered to be lacking, does that mean that the goals have changed overtime? O’Reilly thinks the answer is not so cut and dry.

“If the thinking has changed, and this is where I think in congress and in Treasury and the key stake holders need to continue to have this dialog but move to resolution around, what outcome from conservatorship do we want?” poses O’Reilly. “If it was the case in 2008 that this was a timeout or this was a moment in time but not intended to be in perpetuity, then let’s get to it. In other words, this won’t happen without the political will and commitment that is necessary to move these entities to a post conservatorship state.”

“I think there was a belief that in time, there would be lots of evidence that there was adequate and sufficient private capital that you could stand these entities up, if you will, recap and release them, or that private capital would flock to the market and perhaps that the problem would solve itself in that regard. That’s a gross over simplification. I think what has become more evident is that there may not be interest, adequate or sufficient interest, on the part of private capital to capitalize these entities in a way that is sustainable over the long term. The challenge is that they continue to be vitally and critically important to the healthy function of the housing finance system in the United States.”

The subject of GSE reform has long been a hotly contested one among lawmakers and the housing industry and is not a conversation that the FHFA has shied away from.

In his prepared remarks at the Bipartisan Policy Center earlier this year, Melvin Watt, Director of the FHFA stated that, “without looking somewhat down the road, FHFA and the Enterprises would both lose their momentum and jeopardize day-to-day success.  The key dilemma when you have an uncertain future, however, is how far down the road to look and how to retain the necessary talent to implement either short- or longer-term plan.”

A spokesperson of the U.S. Department of the Treasury shared with DS News that “The taxpayer remains at risk under the status quo. The best way to address the conservatorship of the GSEs is through comprehensive housing finance reform that provides broad access to safe, responsible financing, like the 30-year fixed rate mortgage, in all communities through all economic cycles.”

Though both Democrats and Republicans have proposed various plans for GSE reform in recent years, little has been done by Congress to change the conservatorship or even consider a legitimate path toward reforming the current system. O’Reilly shares that in an entirely non-partisan sense, he believes that the political will to evolve from conservatorship in its current state certainly does not seem to exist.

“I think the one thing that we’ve all learned from this is that it’s easier to institute a conservatorship that it is to undo one or conclude one. That I’m certain of,” says O’Reilly. “This is much more complicated to unwind because it seems to me that the last eight years exposed a reality which is that there is a greater dependence and criticality to both of the enterprises in housing finance in the U.S. than many had been willing to acknowledge prior to the crisis. In that respect, that fact it seems to me underscores the complexity of this. It’s not nearly as simple as recap and release, or again letting them build their capital and then putting them out into the private market place as purely private entities, it’s more challenging than that.”

In the past year though, GSE reform has been hot in the news, with parties on both sides of the aisle pushing heavily for action from Congress. In mid-May, 12 right-center organizations wrote a letter that urged Congress to pass the Mulvaney Bill, a GSE reform bill sponsored by Rep. Mick Mulvaney (R-South Carolina) that would suspend the GSE’s obligation to fund the National Housing Trust Fund and Capital Magnet Fund until they were better capitalized.

Not long after that, a group of 32 Democratic House of Representatives members wrote to Treasury Secretary Jack Lew and FHFA Director Mel Watt to demand reassessment of the Preferred Stock Purchase Agreement (PSPA), which requires the GSEs to have a capital buffer of zero by January of 2018. This request came on the back of Watt’s February speech at the Bipartisan Policy Center, when he proclaimed the GSEs’ capital buffer as one of the biggest risks of conservatorship to date.

Additionally, a new bill was proposed by Congressman French Hill (R-Arkansas) in June, called the HR 5505 GSE Review and Reform Act. The bill would require the U.S Treasury Secretary to study the Federal Housing Finance Agency’s conservatorship of Fannie Mae and Freddie Mac annually, as well as the impact ending that conservatorship might have. The bill would also require the Treasury to present recommendations to Congress each year on how to progress GSE reform and move toward ending the conservatorship.

Looking into the Future

The question still remains though, are these legislative pushes the catalysts that will push forward the process to conclude conservatorship, or will something even more drastic have to occur before deeper action is taken?

“We’ve become very custom to and comfortable with the fact that every quarter both entities net plus to the treasury,” says O’Reilly. “The dynamic will change pretty dramatically over night when the GSEs say ‘oh yeah no deposit, you need to make a withdraw’. I don’t think anyone thinks that that won’t happen. I think most people educated in this industry would tell you that it’s not a question of whether, it’s a question of when.”

O’Reilly states that when this happens he hopes decision makers will sit down and start to have honest productive dialog that is intended to achieve an outcome rather than what we’ve seen to date.

All eyes will turn to the new administration come January for signs of movement with GSE reform, but until that time one thing will remain certain; the past eight years of FHFA’s conservatorship has had a large impact on not just Fannie Mae and Freddie Mac but the industry as a whole.