The Unforeseen Consequences of Dodd-Frank 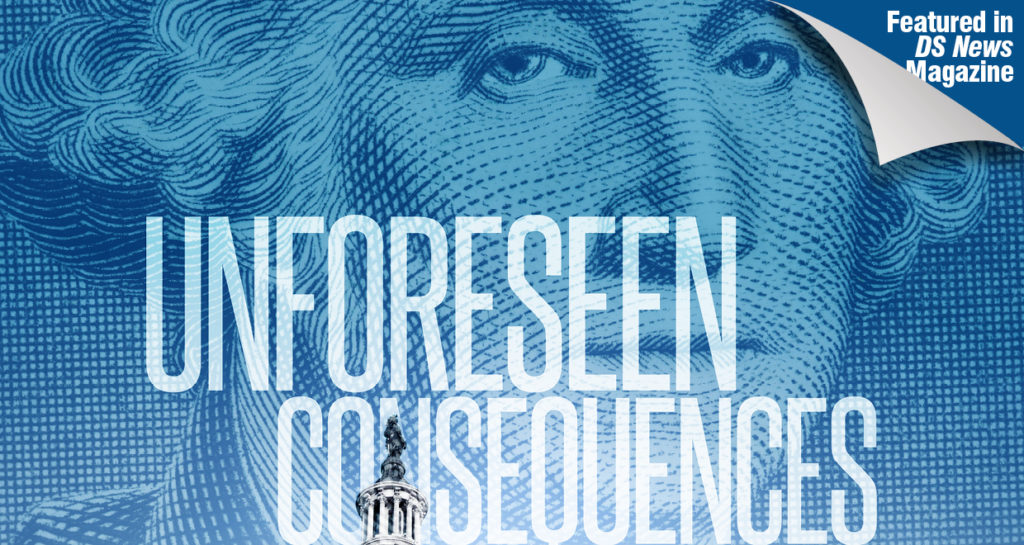 Editor’s Note: This feature originally appeared in the October issue of DS News, out now.

Following the financial crisis of 2008, the United States government sought to enact legislation to protect American consumers and prevent such a crisis from happening again. The result: the Dodd-Frank Wall Street Reform and Consumer Protection Act, more commonly known simply as DoddFrank—2,300 pages of legislation that significantly impacted the financial system. A decade after it was signed into law by President Barack Obama, how is Dodd-Frank affecting the appraisal industry, and how must the industry evolve in response?

Dodd-Frank is the most comprehensive piece of financial reform since the Great Depression. At its core, it is designed to do three things: 1) to provide stronger consumer protections; 2) to regulate derivatives and their underlying assets such as bonds, commodities, currencies, interest rates, and market indexes; and 3) to reduce taxpayer risk and requirements to finance bailouts of massive corporate financial institutions.

Dodd-Frank was written to deploy over time, with some regulations just going into effect this year. Amid ongoing battles over the law, there are currently 16 components to which banks and other financial institutions must adhere.

Consumers have likely encountered aspects of Dodd-Frank in dealing with their banks, financial advisors, or credit card companies. Mortgage paperwork and terms had to be rewritten to be more comprehensible. Banks stopped awarding higher commissions for loans with higher fees. The whistleblower program on Wall Street has received over 4,500 tips hoping to curb financial wrongdoings. Finally, all public companies must disclose the ratio of CEO salaries compared to that of the average employee.

As many point to the housing market collapse as the primary cause of the financial crisis, several of the law’s requirements impact the mortgage industry. Title XIV, the “Mortgage Reform, and Anti-Predatory Lending Act,” was written to hold mortgage lenders to a standard of only lending to borrowers who can pay their loans and streamline data collection for underwriters. Subtitle F of Title XIV was designed to regulate appraisal management companies (AMCs) and appraisal activities within the housing industry. However, it has presented some unforeseen consequences.

What Does Dodd-Frank Require of AMCS?

To curtail predatory lending practices and better regulate the mortgage system, stricter regulations were put in place for lenders, appraisers, and AMCs, including appraiser independence regulations and higher-risk loan requirements (such as requiring a physical property visit).

There is one particular section of Subtitle F, however, that has resulted in ramifications beyond what any lawmaker had predicted. The “Collection and Transmission of Annual Appraisal Management Company Registry Fees” requires participating states to create a National AMC Registry and to meet two standards:

The $25 registry fee is collected in every state where they performed an appraisal in the last year, and the AMC is responsible for all fees. This means that appraisers who are licensed, practice in multiple states, and work with multiple AMCs will have a fee assessed multiple times, in multiple states.

For example, “Joe” is an appraiser licensed in three states and he works with five different AMCs. Instead of $75 ($25 per state), a total of $1,125 will be paid by AMCs on Joe’s behalf. This fee would be collected annually.

While participating in this fee-collection program is voluntary for each state, choosing not to participate results in consequences for AMCs in those states. If a state opts out, AMCs in that state cannot perform service for a federally related transaction (FRT) unless the FRT engages directly with an appraiser, uses an appraisal firm, or if the AMC fits under the 25/15 threshold.

Oversight of this newly created National AMC Registry is bestowed upon the Appraisal Subcommittee (ASC), a government agency created with the passing of the Financial Institutions Reform, Recovery, and Enforcement Act of 1989, better known as FIRREA.

Dodd-Frank, specifically the section about appraisals, amended some of the requirements of FIRREA, resulting in some of the confusion and issues present today.

What Are The Consequences Next Day for Appraisers?

Estimates suggest it will cost $150,000 annually to operate the registry. However, the Real Estate Valuation Advocacy Association, the national advocacy group for the valuation industry, estimates that a total of $8–10 million in fees will be collected. That’s millions of dollars in excess, and there’s no plan as to what to do with it.

More money is being collected than is needed to operate an AMC registry. Dodd-Frank required the creation of the National AMC Registry, along with the assessment and collection of this fee, without providing explicit purposes for its use beyond the operation of the registry. Part of Dodd-Frank indicates the ASC can grant funds back to the states but there’s been little detail on what that could be or how it would be administered.

The Appraisal Subcommittee doesn’t have the option to create a national AMC registry based on the actual cost due to the statutory language set out within Dodd-Frank. As a result, the ASC will collect millions more than needed that will then be granted back to states with the intention to subsidize their appraisal management programs and other appraisal related initiatives. However, as with many such funds, much of this excess will not be used to monitor AMCs but will most likely be swept into the states’ general funds.

The consequences of such a surplus are complex and far-reaching. First, the true cost of these fees will likely trickle down to the consumer. Secondly, these additional funds will create an administrative burden for both the ASC and the states. The ASC will have to create a program to decide which states will receive grants from the excess funding. States will have to set up programs and oversee those programs for the additional grant money. It is unclear if the ASC or the states have the infrastructure and resources to support this effort.

Here is where it gets even more complicated. The passage of FIRREA in 1989 gave states oversight on appraisers and licensing. While Dodd-Frank is a federal statute, the regulations created by FIRREA trump the new law. As such, many states don’t have the statutory authority to collect and manage these fees, meaning laws at the state level must be revisited to comply with Dodd-Frank's requirements.

While Dodd-Frank was passed in 2010, the collection of fees and the creation of the National AMC Registry didn’t go into effect until August 10, 2018. In those eight years, lawmakers at the state and federal levels haven’t been able to amend state laws to collect the fees, and the federal government hasn’t revisited what to do with the surplus. As a result, 26 states have applied for and been granted a one-year extension to comply with the program.

Unfortunately, this is still an uncertain time for AMCs and those concerned with the National AMC Registry. Because Dodd-Frank is federal law and the FIRREA mandates rules on the state level, this issue could only be corrected through federal action.

This fight over Dodd-Frank is starting to build again. On May 24, 2018, President Donald Trump signed the “Economic Growth, Regulatory Relief, and Consumer Protection Act,” the largest rollback of Dodd-Frank regulations since its passing. The new law raises the threshold from $50 billion to $250 billion for banks to be deemed “too big to fail.”

While this doesn’t directly impact the National AMC Registry, some speculate that this could be the first domino in a series of rollbacks of Dodd-Frank. As we head into November and the mid-term elections, it will be interesting to see what role this law plays in the national debate. Those in the AMC community are eager to see what happens next.

Jeff Dickstein, Chief Compliance Officer for Pro Teck Valuation Services, is responsible for Pro Teck’s compliance with all state and federal regulations that impact the real estate industry. Dickstein sits on a number of industry boards and is currently President of the Real Estate Valuation Advocacy Association, a member of the Board of Trustees of The Appraisal Foundation, and on the Government Affairs Committee of the National Association of Real Estate Appraisers. He is also a Certified Residential Appraiser in 17 states.