Mortgage interest rates are at record lows and purchase loan application data indicates tremendous demand for homebuying, according to the data analysts at CoreLogic. In an article published Wednesday, CoreLogic compared the credit attributes for conventional conforming loans in Q2 of 2020 to the same quarter last year. What did they find?

The researchers go on to say that "average debt-to-income (DTI) ratios for conventional conforming home-purchase loans dropped during the second quarter of 2020 from the same quarter in 2019. In contrast, the average loan-to-value (LTV) ratios during this time rose.

"Additionally, the average credit score rose. On net, the drop in DTI ratios may reflect the relaxing of affordability pressures for homebuyers in the face of declining mortgage rates in 2020."

Dramatic variation in the credit-risk attributes of borrowers has been seen over the past 20 years, CoreLogic reports. "DTI and LTV ratios, along with credit scores, are three important factors in mortgage underwriting. Since 2014, credit-loosening policies by the Government-Sponsored Enterprises (GSEs) have helped boost higher DTI and LTV ratios." (To expand the "credit box" to borrowers, Fannie Mae began accepting mortgages with LTV ratios up to 97% in December 2014. Freddie Mac began accepting them in March 2015. To further expand access to credit, Fannie Mae raised its DTI ratio level from 45 to 50% in July 2017.)

As shown in the graph below:

The share of new conventional conforming home-purchase loans with a DTI ratio above 45% rose sharply after Fannie Mae put its new policy into effect. 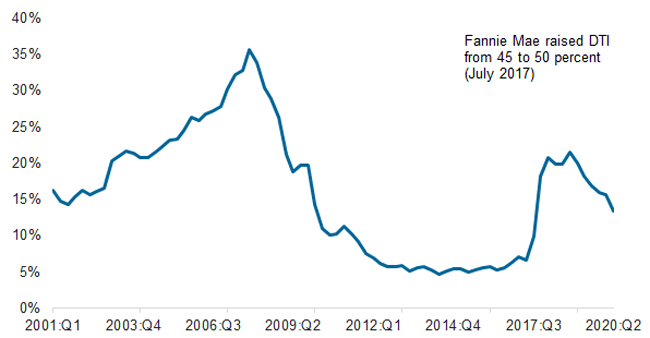 As evidenced in the next graph, the share of new conventional conforming home-purchase loans with an LTV ratio above 95% started to rise in early 2015 following the GSEs’ announcement.

DTI and LTV standards have loosened in the past few years, yet there has been no change in credit score standards, the report showed, and proceeded to detail the following:

"During the second quarter of 2020, the average credit scores for the homebuyers with conventional conforming home-purchase loans rose by three points from the same quarter in 2019. The average credit score was much higher than the pre-housing crisis level. For example, the average credit score of homebuyers was 705 in 2001, but dramatically rose during the Great Recession in 2008, and was 757 the second quarter of 2020. In addition to high credit score standards, those high DTI and LTV loans in 2020 were fully documented and are thus different than the pre-housing crash high DTI and LTV loans, in which many of the latter were low/no documentation loans."

Borrowers with a credit score below 640 as well as the "low/no documentation loan share" both dipped compared to the 2001-2002 benchmark level, CoreLogic added.

The researchers at CoreLogic attributed the decline in share of loans with a DTI ratio above 45% to the "improving affordability attributed to low mortgage interest rate throughout the year." 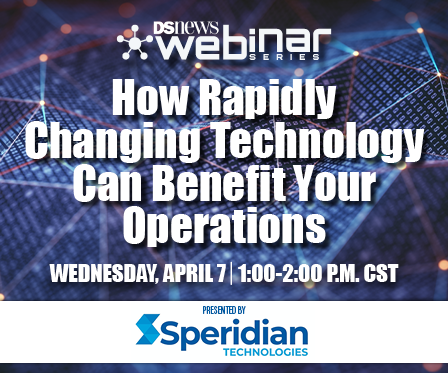