A new analysis of home sale data from Redfin has found that 44% more homes are pending sales than at this time in 2019, but only 3% more homes recently hit the market—down from 12% growth over 2019 just seven weeks prior.

A third of homes are finding buyers within a week of hitting the market, up from 30.8% at the end of the summer. This week, Redfin is comparing today's market with the pre-pandemic fall market of 2019 to highlight how hot the market remains, even as most measures are settling into typical seasonal patterns.

"Comparing today's sales and new listings numbers to the 2019 levels helps to reveal the stark shortage of supply we are facing," said Redfin Deputy Chief Economist Taylor Marr. "The boost of housing supply that came on the market during the summer has already faded away, even as demand tapers off as we expected it to in the fall. Relative to the last 'typical' fall of 2019, demand remains steady and strong thanks to the increased urgency many buyers have as mortgage rates inch up. Rising rates also make buyers more price sensitive, so homes that are priced right are increasingly likely to receive offers right away." 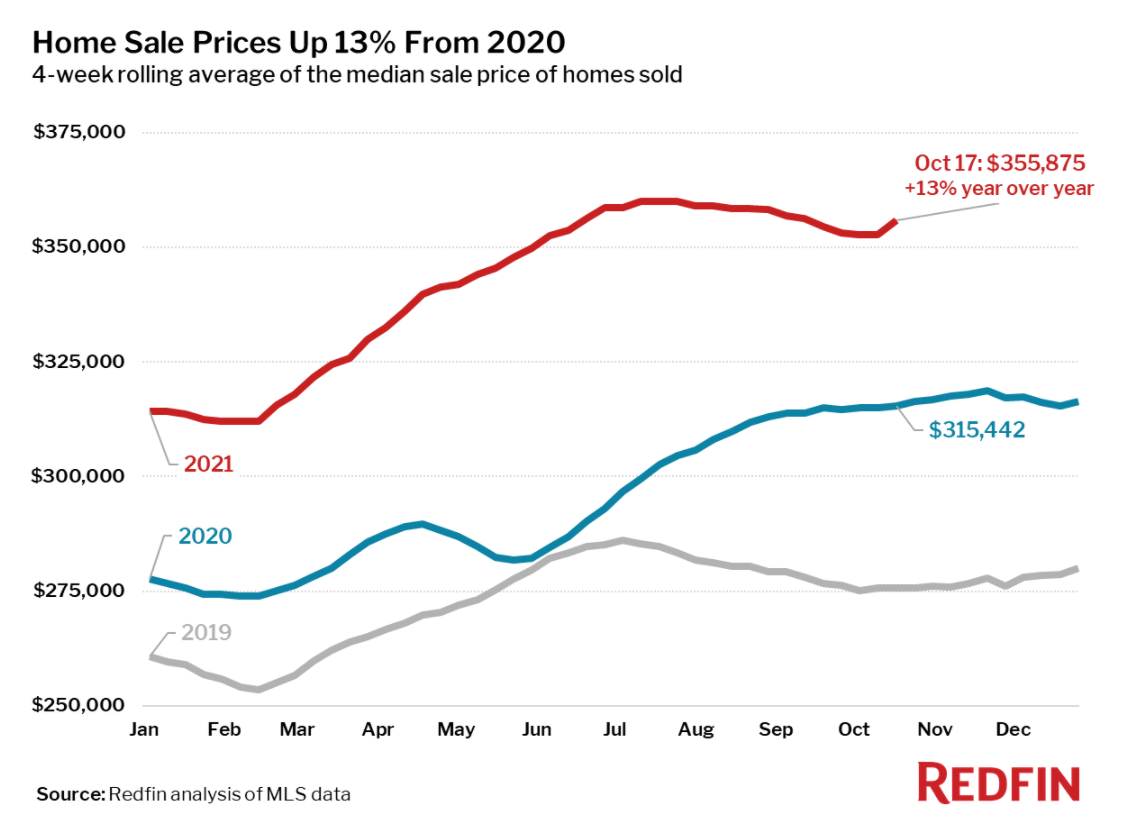 Contributing to the lack of supply is the scarcity of building supplies, which are being marked up to record highs in some cases. The price of framing lumber hit a record-high of more than $1,500 per thousand board feet in mid-May, according to Random Lengths. The previous record before prices began their ascent at the outset of the pandemic in April 2020 was just below $600 per thousand board feet.

Redfin found that the median home-sale price increased 13% year-over-year to $355,875, up 29% from the same period in 2019. Asking prices of newly-listed homes were up 12% from the same time a year ago, and up 26% from 2019 to a median of $362,335, down 1% from the all-time high set during the four-week period ending October 3. Redfin notes that asking prices typically increase in September and then begin to decline in October through the end of the year.

On average, 5% of homes for sale each week had a price drop, up 1.3 percentage points from the same time in 2020, up 0.1 points from 2019, and the highest level since the four-week period ending October 13, 2019. The average sale-to-list price ratio, which measures how close homes are selling to their asking prices, decreased to 100.7%, the lowest level since April. In other words, the average home sold for 0.7% above its asking price.