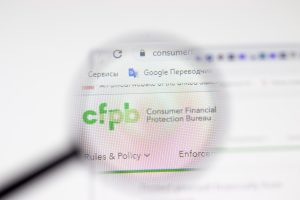 Taking the stand to provide an update on the CFPB will be recently appointed new Director of the CFPB, the Honorable Rohit Chopra. He will be discussing the 114-page “Semi-Annual Report of the Consumer Financial Protection Bureau,” originally released October 8.

With less than a month on the job, Chopra was confirmed by the Senate by a 50-48 vote, taking over the role from former Acting Director Dave Uejio, who was named to the position by President Biden on January 20, 2021.

Chopra served as CFPB Assistant Director and was its first Student Loan Ombudsman before he was nominated to serve as Chairman of the Federal Trade Commission (FTC) in 2018. During his tenure at the FTC, he pushed for aggressive remedies against lawbreaking companies, especially repeat offenders, and has worked to reverse the FTC’s reliance on no-money, no-fault settlements.

After the passage of the Dodd-Frank Wall Street Reform and Consumer Protection Act, Chopra joined the Department of the Treasury to launch the CFPB. He then served as Assistant Director of the CFPB, overseeing the agency’s student loan agenda.

Chopra later served as Special Advisor to the Secretary of Education to advance the Department’s efforts to improve student loan servicing, reduce unnecessary defaults, and bolster enforcement. He was also a Senior Fellow at the Consumer Federation of America, where he focused on consumer protection issues facing young people and military families, and a Visiting Fellow at the Roosevelt Institute.

Chopra is the recipient of multiple awards for his public service and contributions to the field of consumer finance. Prior to entering government, Chopra worked at McKinsey & Company, a global management consulting firm, where he worked in the financial services, health care, and consumer technology sectors.

He holds a BA from Harvard University, and an MBA from the Wharton School at the University of Pennsylvania, and was the recipient of a Fulbright Fellowship.