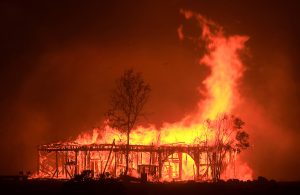 ClosingCorp estimated [1] that there is more than $7 billion in loan value and $60 million in service fees and transfer tax revenue at risk due to recent wildfires in California.

Redfin previously reported [2] that Los Angeles, Orange, and Santa Clara Counties are at risk of losing more than $2 trillion worth of housing as a result of the fires.

“Homes in places like Malibu, the hills around Los Angeles and wine country in Northern California have historically been desirable because the natural beauty of the surroundings has outweighed the risk of natural disaster,” said Redfin Chief Economist Daryl Fairweather. “But with homebuyers and sellers in fire-prone parts of California really starting to feel how environmental risk factors are impacting both the safety and value of their homes, long-term demand will change, though California overall is unlikely to lose its luster. Demand and prices for homes in fire-prone areas will go down, but as a result, they’ll increase in safer parts of the state. California is in the midst of a housing shortage, and the state should take wildfire risk into account when deciding where to focus its building efforts.”

The San Francisco Chronicle [3] reported Wednesday that the Kincade Fire that burned Sonoma County was 100% contained.