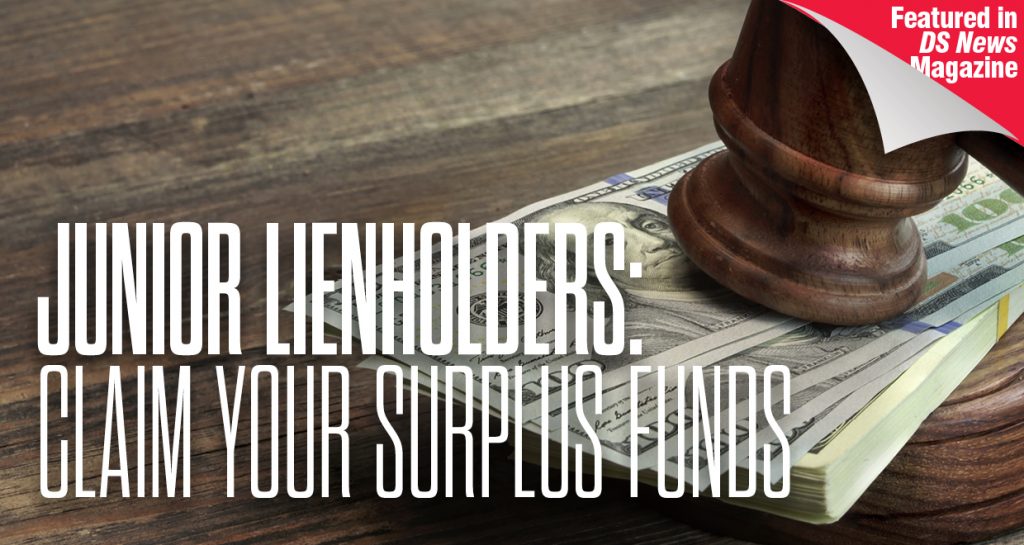 Ever since the United States housing market collapse in 2008, when a lender instituted a foreclosure action and obtained a Final Judgment of Foreclosure, the foreclosure sales process has remained relatively straightforward in Florida. The property is listed for sale at a public auction, a Certificate of Title is issued to highest bidder—typically the lender, for a nominal amount—and the property is placed in that lender’s book of real estate owned until it is eventually marketed and sold to the general public. The primary reason this process has been so straightforward has been based on one simple fact: the Final Judgment of Foreclosure was for an amount substantially more than what the property was worth. Since the lender received a credit bid at the foreclosure sale for the value of its judgment, third-party purchasers were rarely the highest bidders at the public auction. The logic behind this standard course of events is simple. Why would a third party pay more for a property than what it was worth? Simply put, they wouldn’t.

Fast-forward over a decade and the process, outlined above, is becoming less standard. Once again, the reason is based on one simple fact: property values have not only stabilized over the past decade but have also increased to a level that the Final Judgment of Foreclosure obtained by a lender is often for an amount less than the property’s value. Therefore, those third-party purchasers, who were nowhere to be found 10 years ago, are now competitively bidding at foreclosure sales, and the winning bid is often tens of thousands of dollars more than the Final Judgment of Foreclosure. These surplus funds are then held by the County Clerk, pursuant to 45.032, Fla. Stat., until a court order is entered determining how the funds should be distributed.

In this current era of surplus funds becoming the norm as opposed to the exception, the $64,000 question is, who is entitled to these funds and what is the proper procedure to ensure they are obtained? It is well established under Florida law that any surplus remaining after a foreclosure sale should be paid to the junior lienholders based on their priority as it relates the foreclosed property. Only after junior liens have been satisfied can the prior homeowner receive any surplus funds [General Bank, F.S.B. v. Westbrooke Pointe, Inc., 548 So. 2d 736 (Fla. 3d D.C.A. 1989)]. It’s a simple premise, but for a variety of reasons, surplus funds are not always properly distributed when numerous junior lien holders, as well as the prior homeowner, are all trying to convince the court they should be paid first.

If you represent one of these junior lienholders clamoring for surplus funds, here are a couple things to consider:

As a named defendant in the first mortgagee’s foreclosure action, if a junior lienholder fails to respond and/or is subsequently defaulted, does that preclude the junior lienholder from seeking surplus funds? In a word, no. However, lawyers and judges alike have previously, and incorrectly, viewed a failure to respond as an inability to make a claim for any surplus. Failure to respond is deemed an admission as to the allegations contained in the complaint, or more specifically, that their lien is junior to that of the first mortgagee. It is not an admission that the junior lienholder does not have any claim to the property [Wiseman v. Stocks, 527 So. 2d 904 (Fla. 1st DCA 1988), D.A.D., Inc. v. Poole, 407 So. 2d 1072 (4th DCA 1981)]. That said, it is still recommended that a junior lienholder files a response, if for no other reason than to prevent unnecessary costs litigating the issue and ensure notices of upcoming court events, especially the foreclosure sale itself, are timely received.

When does a junior lienholder need to file a claim with the court to ensure it doesn’t waive its right to the surplus funds being held by the county clerk? Until recently, it was the stereotypical attorney answer of “it depends.” However, the Florida Supreme Court provided clarity to this question in Bank of New York Mellon v Glenville, 252 So.3d 1120 (Fla.2018). Pursuant to Glenville, a claim for surplus funds needs to be filed within 60 days of the clerk issuing the Certificate of Disbursements. This ruling resolves any ambiguity regarding the event that triggers a junior lienholders deadline to file a claim for surplus funds under 45.032(1)(b), Fla. Stat.

Now that you feel comfortable with the certainty surrounding the Florida Supreme Court decision in Glenville, House Bill 1361 went into effect on July 1, 2019. Amongst other statutory changes, HB 1361 amends 45.032, Fla. Stat. and the largest change to 45.032, Fla. Stat. is the elimination of a “surplus trustee.” Essentially, the surplus trustee was the person appointed by the county clerk to seek out the prior homeowner, if no surplus claim was filed by any party within the 60 days discussed in Glenville. This surplus trustee had one year from the date it was appointed to locate the prior homeowner before those funds were deemed unclaimed property. Now, HB 1361 attempts to simplify this process by stating any surplus remaining with the county clerk one year after the foreclosure sale is then reported as unclaimed property by the county clerk.

The additional consequence of HB 1361 is it removed that same sixty (60-day timeline from 45.032(1)(b), Fla. Stat., and replaced it with “prior to the date that the clerk reports the surplus as unclaimed.” From the plain language of 45.032, Fla. Stat., as amended on July 1, 2019, junior lienholders will now have additional time to file a claim. The junior lienholders will need to file a claim within the year after the foreclosure sale and before the clerk reports the remaining surplus as unclaimed funds. Whether these changes to 45.032, Fla. Stat. eliminates the Glenville opinion altogether remains to be seen. Until new opinions are released on the topic, the most prudent course of action is to make a surplus claim as soon as possible after the sale to ensure the surplus funds are obtained to partially or fully satisfy your own lien.

In our ever-changing default industry, the large increase in property values opens avenues for junior lienholders to be reimbursed, even if only partially, when a foreclosure action occurs. Clearly, this is a positive for all lenders. However, a positive can quickly turn into a missed opportunity if lenders and their respective attorneys do not timely make a claim for surplus and/or fail to properly get evidence admitted into the record.

Nicholas J. Vanhook is a Partner at McCalla Raymer Leibert Pierce, LLC, and joined the firm in 2010. An experienced litigator, Vanhook uses his knowledge to find creative ways to resolve issues for mortgage servicers. Vanhook received his Juris Doctorate from the Levin College of Law at the University of Florida.