Will Coastal Homes Go Underwater by 2100? 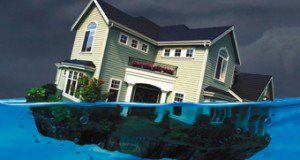 Climate change is beginning to manifest itself strongly in many areas in more than half of the nation’s coastal states. Yet a nationwide analysis by Zillow and Climate Central has found that a significant number of homes in these areas have recently been built in at-risk zones at a higher rate than in safer areas.

The analysis points out that recent constructions of thousands of new homes built in at-risk areas stare at the possibility of chronic floods within just a few decades.

As sea levels rise, nearly 400,000 current homes are expected to be at risk of regular flooding, the main cause being climate change. The ramifications can be abated by 10 percent with moderate emission cuts which will reduce the number of current homes in at-risk areas to 348,000 by 2050. Unchecked greenhouse gas emissions and continued building in flood-risk areas contribute largely to the already existing dangers.

Based on Zillow's housing data and Climate Central's climate-science expertise, the analysis did not take into account the number of new homes—and homes overall—in low-lying coastal areas. The final outcome in the coming decades, however, will heavily depend on the choices the world makes around greenhouse-gas pollution today, the analysts warned.

Assuming that climate change will worsen over time, the estimates of the analysis for the year 2100 are far higher: 1.3 million current homes are anticipated to be at risk of regular flooding if emissions are cut moderately, and 2.5 million homes—worth $1.3 trillion—if emissions grow unchecked.

About 10 percent of homes in Galveston, Texas, and 7 percent in Ocean City, Maryland, are projected to be at risk of at least annual flooding by 2050, which may be reduced to nearly half, given, global emissions are in check. If emission cuts are not prioritized, Hoboken, New Jersey, and Miami Beach, Florida, could see three-quarters or more of their homes at risk of at least annual flooding.

The intermittent floods experienced by coastal areas every year as of now are expected to reach further inland in the future. This will lead to more damage, devaluation of homes, degradation of infrastructure, and interruptions in transportation systems. Moreover, homeowners, renters, and investors may incur major personal and financial losses.

The levels of the rising waters vary locally with coastal communities likely to encounter the effects, depending on the local rate of rise, local tides, and storms. Some major coastal cities—including Los Angeles—sit high enough above sea level that the biggest hit—even as far out as 2100—will be to their beaches, the analysts found.

In New Jersey, 7 percent of current homes are projected to be in flood-risk zones by 2100, under moderate emissions cuts. But as there is a striking number of ongoing developments in areas that face high risk, it poses an imminent threat with 14 percent of the state's homes built from 2010 through 2017 are in the same high-risk areas.