Optimism in the Housing Market 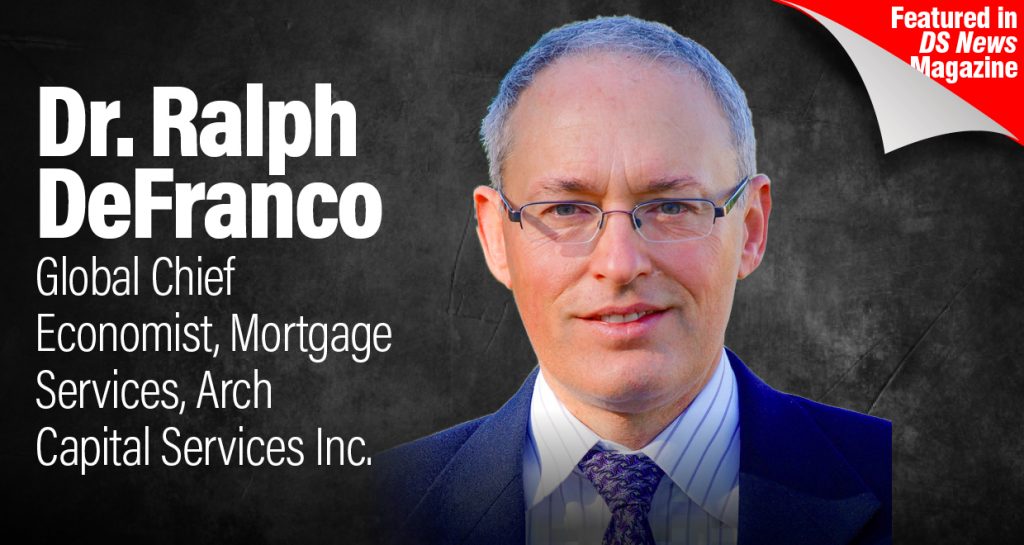 Dr. Ralph DeFranco has a Ph.D. in Economics from UC Berkeley and 20 years’ experience in housing finance and risk management, having served in various roles at Freddie Mac, JPMorgan Chase, and CoreLogic. As an expert on the housing industry, DeFranco is a frequent speaker at mortgage-related conferences. DeFranco spoke to DS News about industry issues unique to California, as well as the threat of a recession and ongoing natural disasters.

Do you believe a recession or economic downturn is on the horizon in the near term?

I don't see any sort of national housing bubble as likely. Things are vastly different now than they were in 2005—in fact, they're near opposites. Back then, we had irrational exuberance of buyers. Now, we have cautious buyers. Back then, we had horrible inequality. You could get a no-documentation loan even if you had a proven record of not paying your bills. Now, it's the complete opposite. It's extremely tight lending quality, and people aren't as heavily leveraged. Back then, people were taking out home equity, but we’re seeing much smaller activity now. Back then, we had thinly capitalized banks and financial institutions. Now, banks are sitting on record amounts of capital.

We're under-built by probably at least a million units. We are not expecting a recession, but if we do go into a recession, I think it will be mild for housing, just because we are experiencing such a housing shortage. Home price declines are certainly possible in the most expensive areas such as California, Denver, or Seattle, but I don't see it getting out of control like it did last time. In fact, I think the next recession would be more like the recessions prior to the most recent one. If you go back in time, the previous four recessions had no home price declines nationally. I think we will be closer to that, where the damage to housing is short-term and limited.

Could you speak more about the ongoing inventory shortages? Do you see any relief from that coming?

Inventory is tight coast to coast. At the end of last year, when interest rates were spiking up towards 5% for 30-year fixed rate mortgages, we were seeing inventory starting to pile up in places like California, and the housing market really went sideways. The market is as strong as it can be given the limited inventory, so there would be more home sales if there were more available. There's a lot more inventory piling up in the million-plus-dollar sectors, and that makes sense because of the changes in the tax law.

The tax law used to heavily subsidize homeownership, and so there was an incentive to buy a larger home. Now that incentive is gone. There's a shift. Parts of the country such as Illinois and Connecticut are actually seeing stagnant or even falling populations as people migrate towards lower tax areas with stronger climates. We're definitely seeing several trends that are playing out, but in terms of inventory, it's generally quite low, especially for the first-time homebuyer or entry-level market. It is higher than it's been in recent years at the upper end of the market. The story is not universally low inventory; it's just a mixed bag.

How are millennials impacting the housing market?

They're definitely the dominant homebuyer. They are a major force in the housing market, and lenders and loan officers need to understand how to work with them. They expect personal contact, but also 24-hour access with texting and online abilities. I think they're a little bit baffled by why the mortgage origination process is so painful and not as streamlined as other experiences they have. There's work that needs to be done there. Half the jobs created last year were in only 17 cities. When you ask college students, “Where would you like to work?” it's always the same five or 10 cities.

The homeownership rate for this generation will likely be lower than previous generations, just because of the nature of work and the fact that this generation and our newer generations are a little more interested in keeping their freedom. In general, however, the aspirations for homeownership are still there, and some millennials are acting on that, especially once they get married and have children.

The cost for natural disasters have been doubling every decade, even when you account for inflation, and that's because we've been building in more marginal areas. There also seems to be an increase in the severity of floods and hurricanes and so forth. I don't see that as likely to change. The costs are going to continue to increase, and so it's an increasing burden on homeowners as insurance costs go up.

I live in California, and the cost of fire insurance has gone up dramatically for the people in these fire-prone areas. It is understandable, but it's certainly a hit to their finances and one more reason to think about moving.

Likewise, Florida has the highest insurance costs in the country, which is understandable given the hurricanes. The National Flood Insurance Program is also typically underpriced. I wish the National Flood Insurance Program would try to step back from their footprint on insurance and make it more fairly priced, because it encourages building in areas that are going to get hit.

There hasn't been a fundamental shift in pricing related to natural disasters as of yet, and part of that is because Freddie Mac, Fannie Mae, and the FHA don't price on the natural hazard risk. The national uniform pricing goes for simplicity because it’s regulated by the government. You can understand senators in a particular state not wanting their homeowners to have to pay higher rates. Unless we can find a way to step back or strengthen government exposures to risk and footprint and housing, I don't see any change coming.

A study from Zillow shows how many homes will be underwater in 2100, which isn't that far off. If the forecast of six feet of ocean rise comes to pass, we would see something like a million homes in Florida literally underwater. That's certainly going to be a disaster, but it's slow. The oceans are rising a fraction of an inch each year. There's been no changes yet, and it could be a very long time before we reach some sort of tipping point where everybody decides, "I'm not going to write a mortgage on this property because of the risks." You do have to wonder if that day will come, because it is a 30-year mortgage. I don't see it coming in the near term.

What are the primary misconceptions you encounter about the current state of the housing market?

There's too much fear of a major downturn. I'm looking at the fundamentals because we're under-built versus being overbuilt. The downward spiral that we got into last time isn't going to happen. There will be pain, there will be some foreclosure increases, but we won't see it feeding on itself like we did last time.