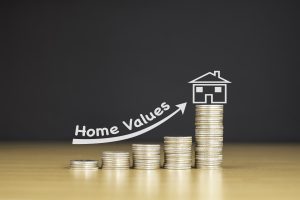 According to Zillow’s latest Home Value Index (ZHVI), home value appreciation slowed in October 2021 for the third consecutive month, as home values rose 1.3% over September, slower than the all-time high monthly appreciation of 2% in July. Zillow has found that the typical home value in the U.S. is now up to $312,728. Annual growth of 19.2% ($50,405) is the highest in Zillow data, reaching back to 2000.

"Home buyers shopping this fall shouldn't expect the same frenzied demand that triggered bidding wars on listings this spring and summer," said Zillow Senior Economist Jeff Tucker. "The normal seasonal slowdown of autumn has returned, when many families are busy with back-to-school activities and planning for the holidays. Buyers can expect less competition, meaning more time to decide on a house and the potential for prices to fall on listings they've saved on Zillow."

Median home list prices have fallen since July, and the share of homes that saw a price cut before selling rose slightly over September, as well, now standing at 14.7%—nearly double the year's low point in April. The most recent data on the share of homes that sold above list price shows a monthly decline of 6.6% in September to 47.2%, down from a peak of 51.3% in July.

U.S. housing inventory was down in October, as the nation’s housing supply was down 17.4% year-over-year, and contracting by 1.1% since September, after rising from May through September. October home listings spent 10 days on the market on average, compared to nine in September; and seven in April, May, and June.

As home buyer options became limited due to a lack of inventory, those searching for homes were forced to turn to rentals to meet their housing needs, as the rapid rise in rents since March pushed annual growth to 14.3%, the highest rate in the series' history (which began in 2015). The typical monthly rent in the U.S. stood at $1,873 in October, approximately $234 higher year-over-year.

“We currently expect 6.12 million existing-home sales to close in 2021, up 8.5% from an already strong 2020 and also up from our previous forecast of 6.04 million sales this year,” said Tucker in his report. “Existing home sales volume rose to 6.29 million (SAAR) in September—up 7% from August, the fastest one-month growth in the annualized series since last fall. This stronger-than-expected showing is the main contributor to the upward revision in our near-term outlook for the series. Our longer-term forecast for sales was also revised up, in part due to changes in home affordability. Though sharply rising home prices present affordability challenges for many, low mortgage rates continue to keep monthly payments manageable for those who can afford a down payment.”