Home / Daily Dose / Optimism in the Housing Market and Economy

Optimism in the Housing Market and Economy 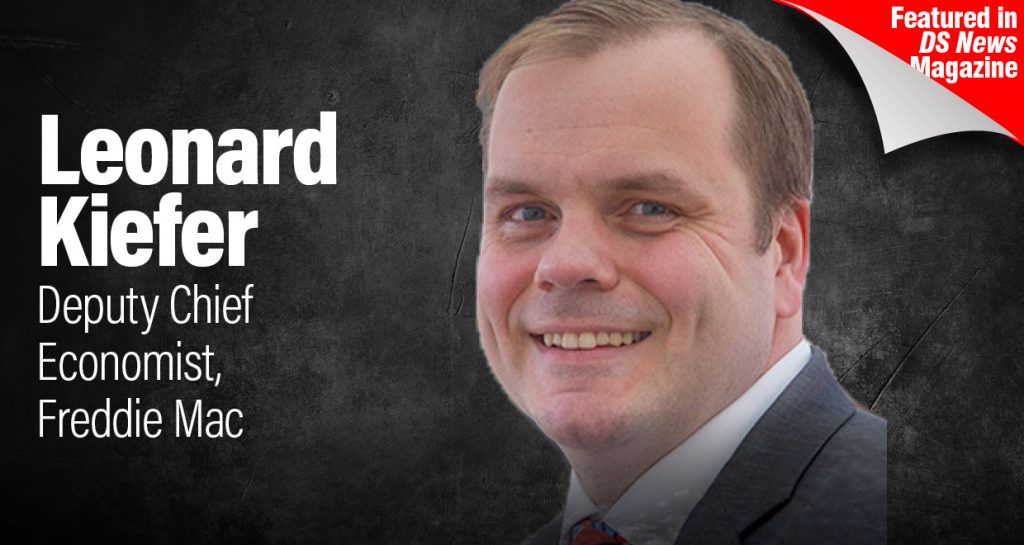 At Freddie Mac, Leonard Kiefer is responsible for primary and secondary mortgage market analysis and research, macroeconomic analysis, and forecasting. Kiefer is also involved in the analysis of policy issues affecting the housing industry. Kiefer is a frequent speaker at professional and academic conferences around the country. Kiefer has also been quoted in the national media as an expert on the subject of housing economics. He is a member of the American Real Estate and Urban Economics Association and the American Economics Association. Kiefer joined Freddie Mac in 2009 as a Senior Economist.

Kiefer spoke with DS News about some misconceptions surrounding the current housing market, and expressed optimism going into 2020.

What is the current outlook on a possible future recession?

The recession questions is at the top of housing economist’s minds. The baseline forecast from the National Association for Business Economics remains “no recession,” but they are getting more worried about the pace of growth. It’s something we have been looking at, and we have been getting a lot of questions. We’re trying to think about it and put our thoughts together—it has been at the top of my mind.

My view is a little more optimistic than my peers. I think the U.S. economy is going to do alright. There are some signs worth talking about, but in general, one thing that is a good sign for the U.S. economy is the housing market. For many of the previous recessions, the housing market has led the economy in a recession and has been pretty resilient, so that gives us some strength to weather manufacturing slowdowns and trade disputes, which may lead to a deceleration in overall growth. We can still have modest growth over the next couple of years, fueled by a housing market that is showing some signs of getting back on track after a slowdown in 2018 and into the early part of 2019.

With economic data, there are always a couple sides to it. We’ve seen some strength in construction and home sales in recent months, but then you look at some absolute level at where those indicators are and there is some room for improvement.

It depends on your perspective. I’m focused in the near-term on the trend, because it gives us a sense of where the economy might be headed and how housing might impact the broader economy. I’m feeling better about the statistics in the most recent couple of months relative to where they were in the early part of this year.

There is still room for improvement. In particular, the levels of homebuilding remain too low for what the U.S. economy needs, and that is constricting housing supply across the country. It’s creating pent-up housing demand, which puts pressure on home prices and rents, and creates an affordability challenge.

There’s definitely places where the housing market could be doing better, but I think the recent trend has been positive in terms of showing growth.

How has the influx of single-family rentals impacted the market?

It doesn’t help in aggregate because it doesn’t create new housing supply. If you’re switching from owner to renter-occupied, that doesn’t create a new unit. If it was a previously vacant home that you have rehabbed and done work on, that’s adding new supply, but that story was several years ago. If you look at vacancy rates across the country in aggregate, they are very low now. There are pockets of areas with very low vacancy rates, but in aggregate, the oversupply of vacant housing that we had, around 2 million by our estimates in 2009 and 2010, has swung the opposite direction. It is now a deficit.

The tenure switching from owner to renter doesn’t help in aggregate if you don’t have a vacant supply to work with. What you’re doing is just switching owner to renter, that doesn’t create any more housing units.

The number of housing units available is low relative to what our population needs. We’ve done a lot of research on that, and it is a major issue. Unfortunately because housing markets move slowly, and investment and construction take time, this is a story that is going to stay with us for a few years.

What are the trends surrounding natural disaster preparedness?

For example, in Houston, where you have a strong housing market, damage from storms means a lot of units need to be rebuilt. The labor devoted to that can’t be devoted to building new units.

Over time, the incidence of these disasters has increased, both in their dollar size and in number. That is creating more pressure. The construction industry is also facing a shortage of workers, and as they face more and more retirements it will put more pressure on the market.

What other pressures are being put on the market?

We have seen a surge in first-time homebuyers. It’s not so surprising given the demographics of the U.S. population. We have a large generation of millennials we hear so much about all the time. There’s a reason we hear so much about them: they are large in number, and so far have not had the typical housing life cycle. They haven’t formed households at the rates of previous generations.

We did some research over the last couple years suggesting that we are having about 1.6 million missing households. Part of that is sociological, but a lot of it is housing costs. That is due to the fact that supply has not kept up with demands, so those first time buyers really get stifled. According to our analysis, the homeownership for 25 to 34-years-olds declined about eight percentage points between Gen Xers and millennials. Of that decline, about four percentage points is due to higher housing costs, including home prices and rents.

That affordability challenge is really hitting those young adults, but even despite that, they are forming households, starting to become homeowners, and starting to move the housing market in a big way over the next three to four years.

We’re really at the front end of a wave on this, and it’s not cresting yet. We are about two to three years out from the maximum impact of that group.

What are some common misconceptions you encounter about the housing market?

One of the things that is tricky is differentiating the effect of a generational impact and things at points of time in their life. Millennials and Gen Xers may have behaved similarly in their 20s and 30s. Even though the oldest millennials are close to 40, they are still young people in the minds of some people, so we really have to start thinking about Gen Z.

They are a totally new generation, and I think are going to be quite different than millennials. It’s hard to distinguish if this is an age effect or a business effect, so a lot of the myths are tied up in conflating these things.

What does your day-to-day at Freddie Mac look like?

I’m fortunate to have a lot of smart colleagues and a great team. I manage a number of economists on my team and I report to my chief economist. I typically check in with them and see what they’re working on. That’s one of the best parts of my job, hearing what other smart people are doing.

Day-to-day, we start off figuring out what’s been going on overseas overnight. We see if the treasury markets have moved. We talk with the team to run some models and do some data analysis. Some of that is graphing, charting. For example, running scenarios if a recession does hit.

2019-11-28
Mike Albanese
Previous: Challenges Ahead for Mortgage Servicing in 2020
Next: The Asset Generating Power of SFR