Faced with elevated home prices and stricter credit requirements, borrowers in Q3 placed, on average, higher down payments on their mortgage loans than ever before, according to Bloomberg [1].

Citing a report from ATTOM Data Solutions, Bloomberg reports the median down payment for single-family residences was $20,775 in the third quarter. That, reported Bloomberg, is the highest in records going back to 2000, "up 69% from $12,325 a year earlier, before record-low mortgage rates kicked the housing boom into a higher gear."

A source from ATTOM has attributed the increased down payments to increasingly rigorous credit standards.

"Down payments are rising at a time when lenders are tightening their guidelines,” said Todd Teta, Chief Product Officer at ATTOM Data Solutions. “Lenders have grown more cautious in order to protect themselves from more delinquencies.” 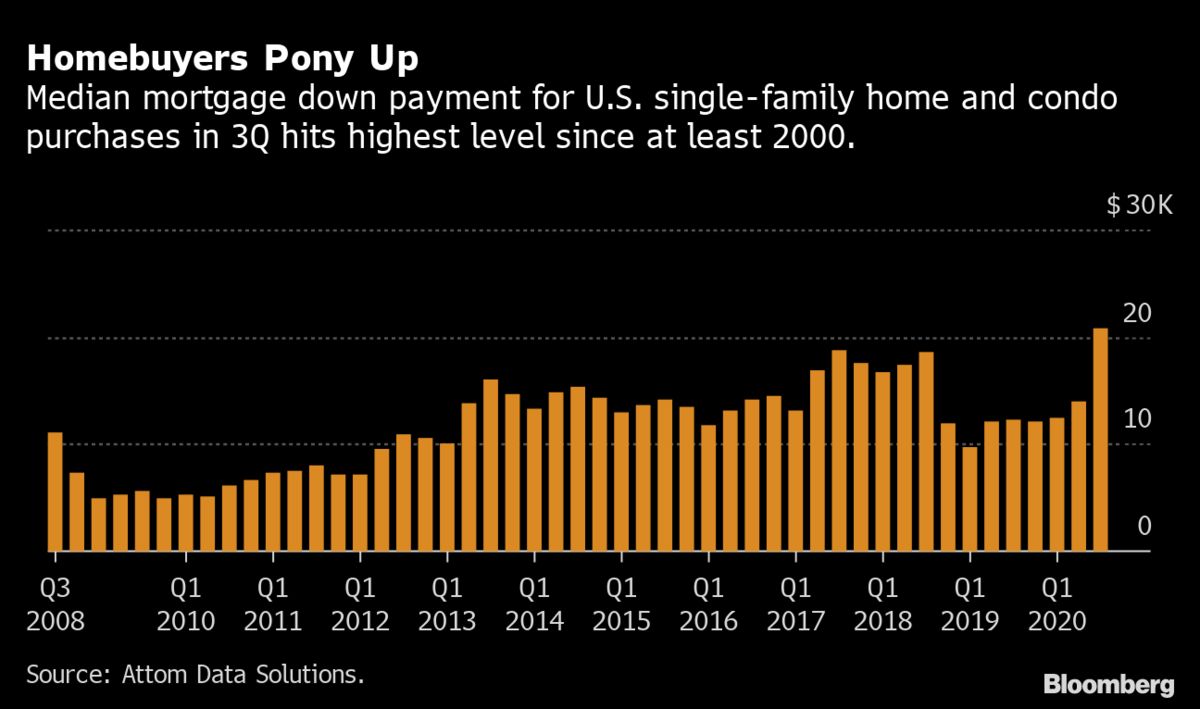 Referring to a Freddie Mac report from late November, Bloomberg reported that mortgage companies are "raking in cash in the midst of the pandemic, earning hefty margins while consumers flood in to buy homes or refinance existing loans to take advantage of record-low mortgage rates. The average for a 30-year, fixed loan tumbled to 2.72% this week, the lowest in data going back almost 50 years."

Bloomberg reporters Prashant Gopal and Shahien Nasiripour deduce: "It’s no wonder that lenders have gotten pickier than they have been in decades ... lenders including JPMorgan Chase & Co. have tightened terms for borrowers amid widespread worry about future economic growth."

They cite, for example, the fact that JPMorgan in early November told loan officers that it would "limit jumbo loans to 70% of the sale price for most co-ops and condominiums in Manhattan."

In Q3, report Gopal and Nasiripour, the average borrower had a 786 credit score—that is the highest median score since 1999. They added that last month saw the highest mortgage origination numbers since 2003 (citing the Fed).