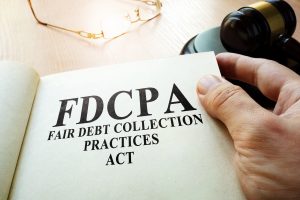 Multiple courts throughout the United States are addressing claims brought against debt collectors for alleged violations of § 1692c(b) of the Fair Debt Collections Practices Act (“FDCPA” or the “Act”) and reaching conflicting conclusions. The Eleventh Circuit granted rehearing and issued a newly revised opinion on October 28, 2021. Hunstein v. Preferred Collection & Mgmt. Services, Inc., 19-14434, 2021 WL 4998980 (11th Cir. Oct. 28, 2021). About three weeks later (on November 17th) the active judges of the Eleventh Circuit voted to rehear the matter en banc (meaning all the judges will consider the matter instead of only the panel of three) so they vacated the October 28, 2021 opinion on November 17, 2021. Hunstein v. Preferred Collection & Mgmt. Services, Inc., 19-14434 (11th Cir. November 17, 2021).

Even though the October 2021 revised opinion has formally been vacated, this article will discuss that opinion, including the extensive dissent written by Judge Tjoflat which will likely influence the court’s decision when they rehear the matter en banc. We will also discuss another case out of the Northern (Federal) District of Illinois (Eastern Division) which refused to follow the (October 2021) revised Hunstein opinion. Quaglia v. NS193, LLC, Case No. 21C3252 (N.D. Ill. October 12, 2021). Once the Eleventh Circuit issues its en banc opinion on Hunstein, we will do a follow up article discussing any pertinent changes.

By way of background or as a refresher, Section 1692c(b) (titled “Communication with third parties”) of the FDCPA reads:

Except as provided in section 1692b of this title, without the prior consent of the consumer given directly to the debt collector, or the express permission of a court of competent jurisdiction, or as reasonably necessary to effectuate a postjudgment judicial remedy, a debt collector may not communicate, in connection with the collection of any debt, with any person other than the consumer, his attorney, a consumer reporting agency if otherwise permitted by law, the creditor, the attorney of the creditor, or the attorney of the debt collector.

15 U.S.C. § 1692c(b). The issue in both Hunstein and Quaglia was whether the debtor in each case had Article III standing to bring their claims in federal court. This is a dispositive threshold question that must be answered in the affirmative for a federal court to consider the case on the merits. Whether a plaintiff has Article III standing is a very complex topic, the details of which are too advanced for purposes of this article. In addition to other requirements (and somewhat oversimplifying the issue), one way a party can establish Article III standing is by demonstrating the plaintiff suffered an injury in fact. An injury in fact is defined as “’an invasion of a legally protected interest’ that is both ‘concrete and particularized’ and ‘actual or imminent, not conjectural or hypothetical.’”

In both Hunstein and Quaglia, the “concreteness sub-element” was implicated by virtue of the intangible nature of harm resulting from violations of § 1692c(b). The issue framed by both courts was whether a “concrete injury” results when a debt collector violates § 1692c(b) by sharing the debtor’s private information with a third-party vendor for the purpose of completing an administerial task such as mailing a letter. To answer that question, both courts looked to the history and judgment of Congress. That is where the similarities between Hunstein and Quaglia end.

In Hunstein, the three-judge panel evaluated the history element explaining that if the “asserted harm” was closely related to “harm traditionally recognized as providing a basis for a lawsuit in American courts” then history favored a finding that the § 1692c(b) violation constituted an injury in fact. As it did in its previous opinion, the court concluded that invasions of personal privacy constituted “a valid basis for tort suits in American courts” and such suits were “sufficiently analogous” to the § 1692c(b) claim to make the harm resulting from a statutory violation, albeit intangible, an injury in fact. Also, in a more conclusory fashion, the court found that Congress identified invasion of privacy within the text of the statute as one of the harms against which § 1692 was intended to prevent, so judgment of Congress also favored a finding for Article III standing. The court concluded the debtor had Article III standing and the lower tribunal’s dismissal based on lack of standing was improper.

Notably, Judge Tjoflat, one of three judges on the Hunstein panel, wrote an eight-page dissent (the original Hunstein opinion was unanimous) in which he explained he “changed [his] mind” since the original Hunstein opinion based on the intervening US Supreme court opinion in TransUnion LLC v. Ramirez. Judge Tjoflat explained the court’s “standing analysis [in Hunstein] sweeps much more broadly than TransUnion would allow.” Similar to the § 1692 cases, the court in TransUnion addressed intangible harms resulting from statutory violations also in the context of Article III standing. In TransUnion, a class of debtors sued TransUnion (a consumer reporting agency) based on its alleged failure to “use reasonable procedures to ensure the accuracy of [the debtors’] credit files…” in violation of § 1681e(b) of the Fair Credit Reporting Act.

In its Article III standing analysis, the TransUnion court considered whether the inclusion of inaccurate information in a debtor’s credit report – without dissemination to a third party – in and of itself constituted a concrete injury. The court found it did not since the analogous cause of action – defamation – required publication of the inaccurate information. The court distinguished between debtors whose inaccurate credit reports were disseminated “to third-party businesses” and debtors whose inaccurate credit reports “were never published.” The court explained: “The mere presence of an inaccuracy in an internal credit file, if it is not disclosed to a third party, causes no concrete harm.” The court also rejected the debtors’ theory that “TransUnion ‘published’ the [debtors’] information internally…to employees within TransUnion and to the vendors that printed and sent the mailings that the class members received.”

Although the court noted this argument was waived since it was not first raised to the lower court, it explained that such an argument “circumvents a fundamental requirement of an ordinary defamation claim—publication—and does not bear a sufficiently ‘close relationship’ to the traditional defamation tort to qualify for Article III standing.” Understandably, Judge Tjoflat of the dissent found this portion of the TransUnion opinion instructive in Hunstein where the only publication of the debtor’s information was to a vendor. To Judge Tjoflat’s dismay and disappointment, the majority in Hunstein identified the TransUnion court’s findings in this regard to be non-binding dicta and refused to follow it. That being said, the Eleventh Circuit may reach a different conclusion when they rehear the matter en banc.

Unlike Hunstein, in Quaglia, the Northern District of Illinois (agreeing with a New York court) relied on and quoted the TransUnion dicta agreeing that the “mailing vendor theory” was an “unavailing” argument since neither “intra-company disclosures” nor “disclosures to printing vendors” have historically been recognized as “actionable publications.” The Northern District also elaborated: “…The need for the FDCPA arose because of collection abuses…” and was implemented to “…prevent debt collectors from utilizing truly offensive means to collect a debt.” The court refused to extend the FDCPA’s purpose to prohibiting debt collectors from hiring “mailing vendors to perform ministerial duties…especially when so much of the process is presumably automated in this day and age.” These findings coincided with Judge Tjoflat’s dissent wherein he explained “the FDCPA did not mean to eliminate debt collection practices. It meant to eliminate abusive debt collection practices.”

In light of the order vacating its October 28, 2021 opinion, the Eleventh Circuit will rehear the matter en banc. This demonstrates the importance of this issue. Article III standing in the context of § 1692c(b) violations has been the subject of much litigation, but not at the appellate level where it would carry precedential value, i.e., be binding on other courts. Until a precedential decision is reached, it is expected that there will be continued litigation on this topic, especially if the Eleventh Circuit sticks to its prior ruling in favor of Article III standing.