Home / Daily Dose / The Long Road Ahead for Default Servicing

The Long Road Ahead for Default Servicing 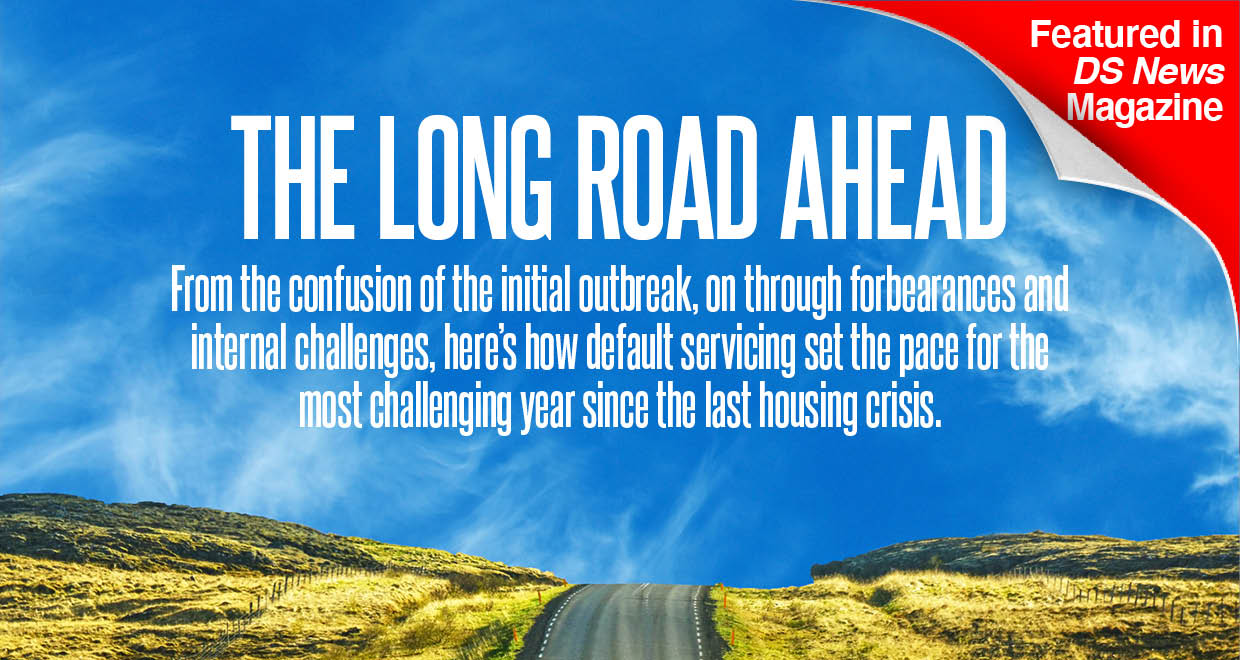 Editor's note: This story originally appeared in the December edition of DSNews, out now.

When COVID-19 reached and spread across U.S. soil, it shocked every sector of American industry. The default servicing business was no exception—albeit several high-level executives say its collective response was nothing short of exceptional. The pandemic sent servicing workforces and their customers, like the entire country, into an initial panic. Delinquency levels spiked, and the government changed rules on the fly. Health and federal agencies compelled brokers, agents, lending staff, and consumers alike to stay home.

However, from that place of perturbation emerged new perceptions and processes. Looking back on 2020, there is enough concrete and anecdotal evidence to suggest that the housing market has been a bright spot in an economy tattered by a national health crisis. Leaders reacted to the global disaster by revolutionizing everything from how employees do their jobs to the homebuying process itself. Housing-finance professionals have swiftly implemented systems to address distressed borrowers. What they are building, they believe, is a foundation that can withstand anything the coming year throws their way.

As 2020 becomes 2021, we find these captains of industry training for the marathon ahead.

Americans’ way of life changed in March 2020, as the global pandemic became the mortgage market’s most significant challenge since the 2008 financial crisis. At once, lenders had to shift focus from current projects to deliver organization-wide responses to the virus and its implications.

For servicers like Bob Caruso, CEO at ServiceMac, “the first thoughts were focused on how to best support our employees, customers, and the mortgage servicing rights (MSR) owners.”

Caruso and several other high-level executives say their companies had implemented, or at least were on track, for a more-digitized enterprise. When COVID-19 arrived, it forced them to swiftly transform large in-office staff to remote workforces and fast-track new rules and technologies.

“The pandemic impacted my team and me dramatically,” Caruso said. “I had been hearing about the virus and the warnings, but I didn’t think it would get serious enough to close significant parts of the country and major sectors of the economy.”

He says he initially was nervous about closing the office and shifting employees to work from home; however, the result exceeded his expectations.

“Our technology, being new and cloud-based, has worked exceptionally well, and our employees have been outstanding. We have been able to excel as a company in every facet of our work. Our focus quickly shifted to hiring and training new employees to support our rapid growth and still maintain the same culture that has helped with our success.”

Courtney Thompson, SVP Default Mortgage at Flagstar, says her bank had decided to push all available roles to remote work before the declaration of the national emergency. That move proved pivotal as the country commenced to close.

Prior to Friday, March 13 (“Go figure,” Thompson quipped), Flagstar had undergone a full-scale initiative “to bring default servicing to our homes,” she said. In other words, Flagstar went remote in advance of the forbearance wave that hit in the following weeks.

“Default is a human business,” she said. She says she felt fortunate that “our humans on the inside of our operation were home safe and positioned to help our humans on the outside, our consumers.”

Tim Rood, Head of Industry Relations at SitusAMC, says he had to “lean into data and analytics-driven processes like never before.”

Those at the helm of major servicing businesses compared the pandemic’s effects to those of other environmental calamities.

“When the forbearance wave hit in mid-March,” Thompson said, “it can only be likened to a large-scale-natural disaster in every state, county, city across the country.”

“The challenges related to COVID-19 are similar to those servicers faced with floods, hurricanes, fires, and the like. However, the key difference is instead of a regional event impacting a segment of your loan population, COVID-19 impacted homeowners all over the country.”

Thompson says her role shifted, immediately, “to the trenches, to ensure that we could keep up with the consumers, the quickly issued changes in the law, the need to recruit and train a new workforce, and beginning, early, to plan for what was to come.”

While the country collectively dealt with rising turmoil, pundits saw some striking trends.

“First, people were expecting the market to crater,” said Ralph Defranco, Chief Economist at Arch MI, “And it did, sort of, at first it did, and everyone was watching the news every day, but now, it’s come back stronger than ever.”

He believes there are two major contributing factors, including record-low interest rates, thanks to the Federal Reserve, he says. The other is the fact that the home has never been more critical than it is now.

“People have recognized the need for more space, more comfort, and they’re out there looking for a different housing situation.”

... Read the rest of the feature on p. 46 of the December edition of DS News, available here.