Home / Daily Dose / Taking the Pulse of the Mortgage Industry

Taking the Pulse of the Mortgage Industry 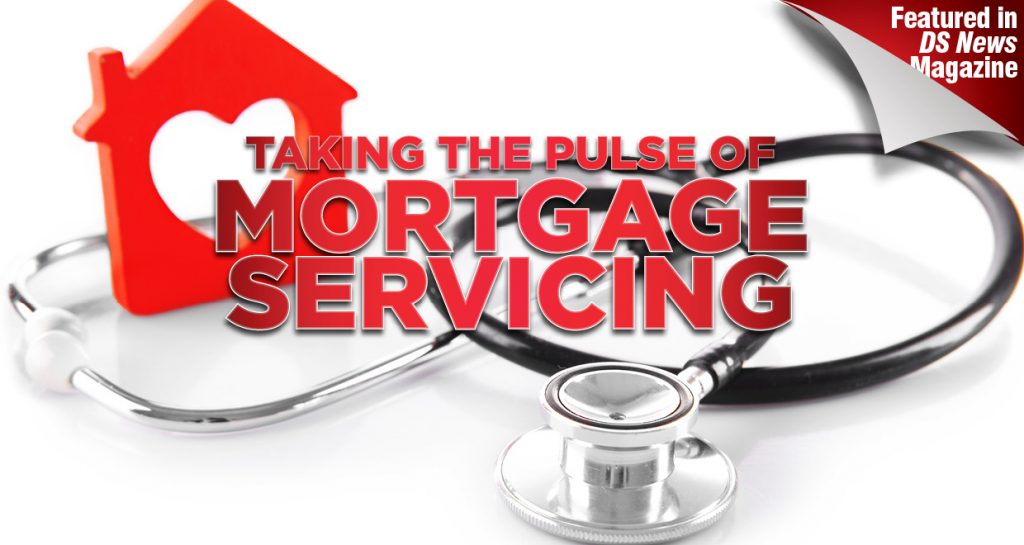 2019 was a year of change and challenges for servicers. The industry faced continued damage from natural disasters, the shifting needs of a changing mortgage customer base, and the ongoing challenges of innovating and achieving success in a low-volume environment.

As we approach the end of 2019, DS News spoke to servicing industry leaders about what they learned this year, and what to expect going into 2020.

Mike Rawls, EVP of Servicing for Mr. Cooper, outlined three key factors to look at in 2020: continued pressure on costs, a focus on natural disasters, and—possibly surprising to some—a chance of rising delinquencies in the months to come, even after historically low delinquency rates nationwide.

“One of the other major themes in 2019 has been the continuance of historically low delinquency rates across the nation,” said Caroline Reaves, CEO, Mortgage Contracting Services, who added that this trend “goes hand-in-hand with the strong economy and low unemployment rates we have also been seeing.”

CoreLogic reported in November that the foreclosure inventory rate fell to 0.4% in June, which equals the lowest for any month since January 1999. The share of mortgages that were in any stage of delinquency was 4% in June—a decline from last year’s 4.3%.

What might make delinquencies rise a long decline into historically low levels after the Great Recession? Rawls points to slowdowns in home prices across the country.

In October, a Bankrate study noted that homebuyers were “sailing calm waters” with lower rates and slowing home price appreciation. Fannie Mae Chief Economist Doug Duncan observed that “at the beginning of 2019, rates started to come down, then we saw this big drop in rates. We didn’t expect such a significant drop-off—it was 30 points more than we forecasted.”

“Home price appreciation has slowed across the country and we are starting to see early stage delinquencies rising from historic lows,” Rawls told DS News. “Staffing appropriately for outbound early stage collections and to assist customers in need will become more important in 2020.”

Rawls also spotlighted the rising costs of servicing. DS News recently reported that Mid America Mortgage, Inc. severed ties with its subservicers in an effort to cut costs, opting instead to bring servicing in-house. This will mean utilizing new technologies to ease the transition, as Mid America noted that it had made investments to digitize its servicing division by encouraging paperless billing and electronic payments.

Rawls said, “In order to service effectively, servicers have to properly leverage their technologies—providing their customers with the ability to self-service 24/7 via multiple channels, including web, app, and IVR, and to conduct operations such as phone payments, payoff quotes, and escrow analysis without having to place a call to customer service, creating tasks for back-office personnel to execute.”

Another concern for servicers? The increased threat of natural disasters. Though Rawls notes that “hurricanes did not cause as much damage as in the prior two years,” there was still significant damage from flooding and wildfires across the U.S. According to CoreLogic, 20 of the country’s metropolitan areas posted at least a small annual increase in overall delinquency, notably in areas impacted by flooding this spring in Kentucky, Ohio, Illinois and Indiana. CoreLogic data also revealed that there are 775,654 residential properties at extreme risk of wildfire damage in the 13 Western states, with a reconstruction cost value (RCV) of just over $221 billion in 2019.

“With denser housing populations in areas prone to floods and other disasters, the need for servicers to be present for their customers in time of need is higher than ever,” Rawls continued. “The ability for impacted customers to route directly to empowered and educated customer service agents will differentiate servicers in their customer’s greatest time of need.”

Disaster on the Radar

The U.S. has  experienced 36 major disasters so far in 2019, according to data from Fannie Mae, and for those homes in disaster-areas, preparation begins at the building process. Mike Hernandez, VP for Housing Access and Disaster Response & Rebuild at Fannie Mae, said in a Fannie Mae Q&A that “preparedness should include far more than financial steps and logistics.”

A study by the National Bureau of Economic Research found that mortgages written on homes in these “exposed locations” are being shed by banks and absorbed by Fannie Mae and Freddie Mac.

“This implies that homeowners and investors have been making location decisions without properly pricing the cost of potential peril, and that the government has been enabling the oversight,” the Harvard Business Review reported.

Although this year’s hurricane impact was less than in some other recent years, wildfires stepped to the forefront as far as natural disaster risk in 2019. In California alone, ClosingCorp estimated that there is more than $7 billion in loan value and $60 million in service fees and transfer tax revenue at risk due to recent wildfires.

Going into 2020, Rawls suggests servicers need to “be proactive” with their customer outreach ahead of disasters. Technology again is key to this approach, as it can give customers 24/7 access to the information they need, when they need it.

“Having smart systems that allow customers access 24/7 to update their status, report hardships, and provide emergency contact information helps servicers to quickly assist customers most impacted by disasters,” Rawls noted. “Additionally, the ability to harness satellite and drone technology to provide images can assist servicers in identifying the highest risk properties to prioritize outreach to those customers.”

Looking beyond 2020, servicers must learn how to adapt to the needs of younger generations, such as Gen Z. Like Millennials before them, Gen Z is increasingly reliant on technology and interconnectivity, but this doesn’t only mean through an app.

“Millennials and Gen Z are more reliant on self-service and anytime, anywhere convenience, but when it comes to the largest purchase ever, we still believe that having a trusted advisor will play a key role in addressing their needs,” Rawls said.

“We’re confident the combination of digital educational tools and empowered and educated mortgage professionals will be the winning combination for the next generation of homeowners,” he continued.

Servicers need to be able to adapt to new technology, according to Armando Falcon, Founder and CEO of Falcon Capital Advisors and former head of the Office of Federal Housing Enterprise Oversight, the precursor to the FHFA. Even in a low-default environment, it’ll take advancements in tech to stay strong as these new generations enter the housing market.

“It requires some resources, some capital, but if consumer preferences move in that direction and the originators also are moving in that direction, servicers have to follow along,” Falcon said. “They haven't had to make any changes yet because there's been no demand for it, but once that demand does exist, the servicers will be fast followers because they want to maintain a servicing portfolio. They've got to keep a growing customer base.”

Part of the appeal of new technology is increased ease and accessibility, not just for the customer but for the servicer as well. Automation, according to Jane Mason, CEO of Clarifire, can cut down on busy work. Artificial intelligence, she said, can automatically complete the “review of documents and eliminate the manual labor,” getting customers the info they need, when they need it.

Automation can also help identify risks in what Gagan Sharma, President and CEO of BSI Financial, calls a “needle in a haystack,” as it is normally a small percentage of loans that are at risk.

“Most servicers are running at a level of quality where 98%, 99% of the loans are working just fine,” Sharma told DS News. “It is the last 1% of that causes issues. We have spent a lot of time, effort, and money on identifying those high-risk assets and then putting corrective measures in place.”

The Federal Reserve slashed interest rates three times in 2019, dropping its benchmark lending rate in October by another quarter of a point.

Doug Duncan said the Fed cited "implications of global developments" as rationale for the cut.

Although the Fed has lowered rates to spur economic growth, Jarred Kessler, CEO of EasyKnock, said that plans doesn't always work out.

"Lowering rates doesn’t always have the economic impact we think, or expect it to have because it disrupts the natural economic ecosystem," Kessler said. "Just look at Japan—it can drive housing growth and a push in the stock market, but other facets of the economy are bound to lose. In the longer term this along with inflation can have a very negative impact."

Kurt Johnson, Chief Credit Officer for Mr. Cooper, cited interest rate increases as a major lesson learned in 2019. The Fed was expected to continue raising interest rates at the end of 2018, but, as Johnson said, “Interest rates rarely follow their predicted path.”

“As a mortgage originator and servicer, creating processes that scale up and down without the need to ramp up or down; and developing tools to help loan officers and customer service agents address customers’ needs is critical,” he continued.

Though the possibility of a future recession remained a hot topic in 2019, Johnson doesn’t expect this to come to fruition in 2020, as several economic indicators point to growth. However, as his colleague Rawls noted, delinquencies are expected to increase in the coming year.

A consumer-led recession is unlikely, Johnson noted, as incomes have risen steadily through 2019, while unemployment has stayed historically low. This was offset, he noted, by slow home price appreciation.

“This should increase delinquency rates, particularly with low-down-payment, first-time homebuyers in FHA products—an historically more labor-intensive product to service,” Johnson said. “Having experience dealing with distressed customers and having robust loss mitigation technology, allowing a servicer to scale up quickly for rising delinquencies, will be a differentiator in the coming 12 to 24 months.”

Though his outlook does not include a recession in the near future, Johnson notes that now is the time to prepare. For Johnson, this means utilizing technology during times of health and stability—so you are better prepared when significant change comes down the pike.

“The industry was caught flat-footed in 2008 when increases in delinquencies outpaced staffing adds,” Johnson said. “Effectively leveraging technology can help solve some of those issues by quickly scaling and improving the customer experience.”