Shoring Up the American Dream 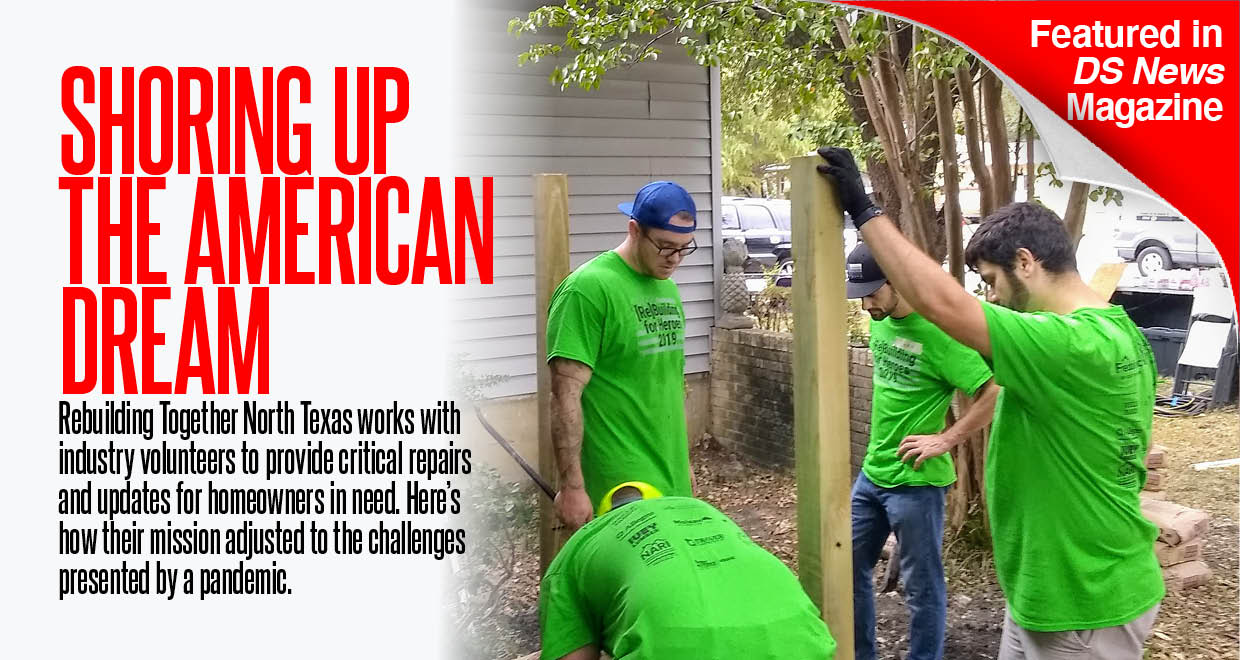 Editor's note: This story originally appeared in the December edition of DS News.

One morning in October 2019, nearly two-dozen volunteers descended upon his home. By the time the team packed up the last of their equipment and wished Mr. Morgan well, they had replaced his roof, front and back doors, and completed numerous small repairs throughout his home—they even repainted several rooms and fixed a leaky toilet.

“They went above and beyond,” Morgan said.

All of this came courtesy of Rebuilding Together North Texas, the metroplex’s branch of a national nonprofit with four decades worth of similar charitable projects under its belt. The repairs made a world of difference for Morgan, a veteran of the United States Marine Corps who served in Vietnam. But for Rebuilding Together North Texas, it was just another day on the job.

The organization’s website describes its mission as “working to preserve affordable homeownership and revitalize communities with free home and facility repairs.” The North Texas chapter has pursued this mission since 2001, in that time having “made critical safety and accessibility improvements to more than 500 homes.”

A heating and air conditioning contractor by trade, Jim Kuhs became involved with the organization in 2011, after being contacted by Bob Moisten, the founder of the North Texas chapter of Rebuilding Together. Moisten invited Kuhs to help tackle a project for an elderly woman who needed heating and air conditioning installed in her home, which at the time only had window units. Having enjoyed the project, Kuhs continued working with the group, and today he serves as Rebuilding Together North Texas’s President of the Board of Directors.

And as for the woman he helped back in 2011? “I still get Christmas cards from her to this day,” Kuhs said.

There’s no question that Rebuilding Together tackles worthy causes. But what happens to that worthy cause—one supported in part by volunteers willing to put in the hard work—when the unexpected arrives in the form of a global pandemic health crisis that drags on for (as of this writing) approaching a year? DS News spoke with the Rebuilding Together North Texas team to learn how they’ve navigated the challenges this year presented and how they plan to carry on into whatever 2021 brings to bear.

That “critical” aspect is an important guidepost when it’s time for the Rebuilding Together team to prioritize projects to tackle within a given home. As Executive Director Garett Jones told DS News, "We don't want to just come in and paint a house when there's a major plumbing leak. We want to do the most impactful work that we can and that our funding allows.”

While the outbreak of a global health crisis tossed a wrench into the spokes of the organization’s standard procedure book, it certainly didn’t slow demand. With millions of Americans out of work due to COVID-19 and the related economic fallout, the extra spending money needed for home repair—even critical ones—was often in short supply. This made Rebuilding Together’s mission more important than ever, even as the harsh realities of COVID made achieving those goals more complicated than ever.

Jones told DS News that the group receives an average of seven to 10 applications per week, in addition to referrals through the city of Dallas, other non-profits, and other sources. Jones said that, even in the face of the pandemic, the group still tackles each potential project from the same starting point: where can they make the most impact in the time and with the resources available?

In addition to considering specific requests from the application process, the group evaluates each new home using a 25-point checklist to help prioritize what needs to be done, and in what order.

“Typically, the homeowners we help have been in their homes for a long time,” Jones said. "They're fully aware of their home, and maybe they used to take great care of it and they're just not able to anymore for whatever reason, financial or physical or a combination of both.”

Chuck Wright, President of Provident Realty, has worked with Rebuilding Together North Texas for about two years, including on Morgan’s home mentioned in the opening of this piece. He told DS News that the basic timetable is the primary challenge for these projects.

"We do not want the client to suffer too much interference or disruption of their daily life. If we can transform their space quickly and painlessly, they can experience the full impact of their new repairs as smoothly as possible,” he explained.

Roofs and floors are commonly prioritized, as well as providing or upgrading home accessibility features such as wheelchair ramps or bathroom grab bars, which can make a huge difference for homeowners with a disability.

Jones added that even something that doesn’t initially seem to be a safety issue could present obstacles for the elderly or those with a disability. “Flooring is a big thing,” Jones said, noting that "lots of old carpet just is not safe.” The group typically swaps out such dangerous flooring with a vinyl plank floor, providing a smooth surface with no tripping hazards. Unlike carpeting, it will not soak up contaminants and pollutants.

“We do just about anything on a house other than the foundation," Jones added. "We would love to do what you see on Extreme Home Makeover, but that's not who we are. We try to make the biggest impact with what we have.”

Normally, the month of April would be a huge focus for Rebuilding Together North Texas. That's when the group would participate in National Rebuilding Day, hosted on the last Saturday of April. That’s part of National Rebuilding Month, which spans the breadth of April and sometimes spills over into May as well. Jones said he estimated that, during that period, the group typically helped refurbish one home every other day.

“When I first started, it was a multi-day event with lots of houses and lots of logistics," Kuhs said. “I thoroughly enjoyed that—getting all the pieces of the puzzle to come together on a big scale.”

Beginning each September 11 and then running through Veteran’s Day on November 11, the group shifts focus to their “Rebuilding for Heroes” program, which focuses on aiding veterans and military widows.

Unfortunately, April of 2020 was not your typical National Rebuilding Month. With the coronavirus wave surging over the country, resulting in widespread lockdowns, a massive shift to remote working, and the introduction of phrases like “socially distanced” to everyone’s daily lexicons. Nor would the status have returned to quo by the fall in time for “Rebuilding for Heroes.” Even in the early days of the health crisis, it quickly became apparent that, however Rebuilding North Texas would approach 2020, it could not be “business as usual.”

In mid-March, the group went through a ritual many other businesses and groups were engaged in around that same time: shutting down their physical offices. (Jones said the group’s lease on their office was nearly up, so they opted not to renew. They remain fully remote.) They also halted all existing projects for the safety of both their volunteers and those they aspired to help.

“A lot of our homeowners are in that high-risk zone," Jones explained. “Typically, older homeowners often have preexisting health conditions, and some are even homebound or bedbound.” Erring on the side of caution seemed crucial.

Working with the national office, the group developed policies and procedures centered around the new reality of COVID-19. In mid-summer, the group had implemented their new game plan, resuming work utilizing contractors exclusively. While the group is still using volunteers for assistance with paperwork, marketing, and other items that can be done remotely, they canceled all "on-site" volunteer work for 2020. This difficult decision was necessary, however, given much volunteer help had factored into many of the group’s projects such as National Rebuilding Day. That “pause” on volunteer assistance may continue into 2021 as well, Jones said.

With contractors, Jones said, “you get the skilled work, and it's typically higher quality than an unskilled volunteer, but contractors are also expensive.” Nor was that the only challenge brought about by the decision to move away from volunteer work for the year. "With COVID, the construction and remodel industries are booming, and materials are more expensive and in shorter supply.”

Funding and the Future

“Fundraising is tougher when you see so many losing their jobs and companies are struggling to keep employees," Jones said. "That changes the dynamic of what fundraising looks like and what our projects look like.”

“We're in a wonderful position to have Garett because of his financial background,” Kuhs said, referring to Jones’ past positions as an accountant for MACH Resources and Chesapeake Energy. “He was the first one, along with our Treasurer, to see the writing on the wall. We have no idea how long [the pandemic-related challenges are] going to last, but there are no volunteer events, which is death to a nonprofit.”

Since that initial shift last spring, Jones and his team have remained creative when it comes to putting forward alternative fundraising methods beyond their standard template.

On March 2, 2021, the group will host a charity golf tournament at the Canyon Creek Golf Course in Richardson, Texas. The event offers sponsorship levels of various price points and opportunities for both amateur and professional golfers to participate. You can learn more about the golf tournament on the group’s website at rebuildingtogetherntx.org.

Heading into next year, Rebuilding Together North Texas will continue relying heavily on contractors until such time as it’s safe to involve volunteers with the actual repair and rehab work.

"We will continue to pivot. We will continue with contractor work, engage volunteers in a digital or remote aspect as much as we can, and probably rely on guidance from other affiliates who typically do more contractor work than we have done,” Jones said. "We have some grant applications out that we are hoping will come through, and those will allow us to continue the work without those volunteer groups. I don't see volunteers just being able to come out in January or February, but I'm hoping maybe a year from now, we're in a different place. We will see what happens.”

Regardless of the unknowns the future holds, there’s no question that Rebuilding Together North Texas will continue changing lives for struggling homeowners such as Mr. Morgan.