Where Are Home Improvements Showing the Strongest ROI? 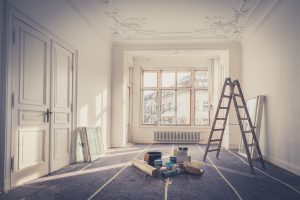 Home improvement and remodeling projects have been increasingly popular throughout the pandemic, as more people find themselves spending more time at home. HomeAdvisor found that spending costs on home improvement averaged $8,305 over 2020, an increase of $745 from 2019's totals. The most popular projects were bathroom and kitchen remodels. On average, homeowners spent $2,995 on each project. Though renovations are refreshing, many are probably wondering if these projects were worth it financially and how much it will increase their property value.

HomeAdvisor analyzed data that showed thousands of real estate listings in 10 of the hottest real estate markets in the country. The goal was to find out where renovated or updated homes were found to have the largest increase in price-per-square foot.

The following five cities were found to have the highest ROI for home renovations:

Dallas/Fort Worth
The Dallas/Fort Worth housing market is one of the largest in the nation. The median sale price is $385,000, and homes spend about a month on the market. Data considered the average square footage of homes completed in 2020. In the Dallas/Fort Worth market, that average comes out to be about 2,260 square feet. With those numbers, we find that an average-sized, non-renovated home would sell for around $459,210. Meanwhile, a renovated home would sell for around $563,600, meaning that a renovation could help boost your home’s value by over $100,000.

Miami
Another real estate hot-spot, Miami homes have a median sale price of $415,000, and they’re staying on the market for 52 days, which is nearly double that of the Dallas-Fort Worth market. On average, renovated homes are valued at $362 per square foot. Meanwhile, non-renovated homes sit at $300 per square foot. That $62 difference denotes an almost 21% increase in value from home renovations. An average-sized Miami house would be valued at around $678,280 before any renovations. After improvement projects, that value jumps to around $819,255. In other words, home renovations can add an extra $140,000 to your home’s value.

Houston
Compared to other cities on the list, Houston features relatively low average home values. The median sale price is $284,900, and homes only spend 19 days on the market. For an average-sized house in Houston, homeowners are looking at a value of $142 per square foot before any renovations. After renovations, that number rises to $167 for an increase of 18%. That extra $26 per square foot may seem small, but on average, that leads to an increase of over $57,000. Specifically, renovated Houston homes of reap an average profit of more than $70,000. 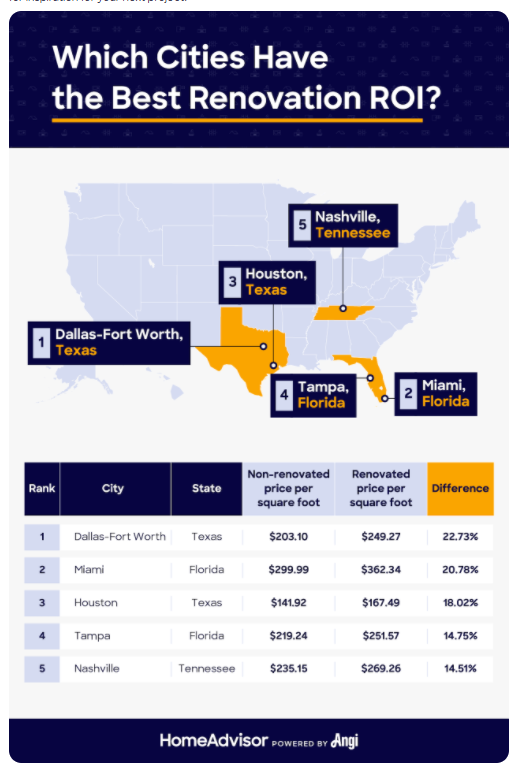 Click here to view more on HomeAdvisor's "Cities With the Highest Return on Investment From Home Renovations" report.