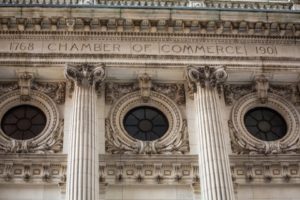 A group of lobbying groups, including American Bankers Association, Consumer Bankers Association, and Financial Services Roundtable and numerous others, filed a complaint [2] with a Dallas Federal Court against the CFPB Friday on the hotly-debated arbitration clause that was recently passed. The suit has been spearheaded by the U.S. Chamber of Commerce.

The CFPB, when finalizing the rule, argued that it gave consumers more options when it comes to challenging Big Business, but opponents of the rule say it could have unintended consequences, such as higher interest rates for consumers and an increase in revenue for trial lawyers.

In making its arbitration rule, the CFPB conducted a study defending its actions, which were contested by members of both the House and Senate, arguing that the data was skewed, and wasn’t indicative of the real ramifications of eliminating the standard arbitration clause effects.

The Office of the Comptroller of the Currency also released findings based on the data which contradicted the CFPB's findings. According to the Acting Comptroller of the Currency Keith Noreika, "In the published final rule, the CFPB states that analysts were unable to identify any evidence from the data to indicate companies that removed their arbitration agreements raised their prices. The OCC review of the same data, however, shows that there is an 88-percent chance of the total cost of credit increasing as a result of the final rule prohibiting mandatory arbitration to allow consumers to pursue class-action lawsuits and a 56-percent chance that costs will increase by 3 percentage points or more."

The complaint challenges the legality and the constitutionality of the arbitration rule based on four reasons, which according to the complaint are “independently sufficient to require invalidation of the [arbitration] Rule.”

Complainants argue that the rule is a product of, “and fatally infected by” the unconstitutional structure of the CFPB, which was provided by Congress in the Dodd-Frank Act. The complaint also argues that the rule violates the Administrative Procedure Act, due to the fact that the CFPB failed to observe legal requirements when making its conclusion based on a study that was “deeply flawed” insofar as it misappropriated data and ignored important considerations when gathering said data.

Third, the rule also ignores previous records reported by the Bureau, and such points to the fact that the finding is “the very model of arbitrary and capricious agency action.” Finally, the rule is counterintuitive, in failing to support public interest or consumer health by denying arbitration, an option that is commonly believed to benefit overall consumers in favor of the less beneficial option of class-action lawsuits.