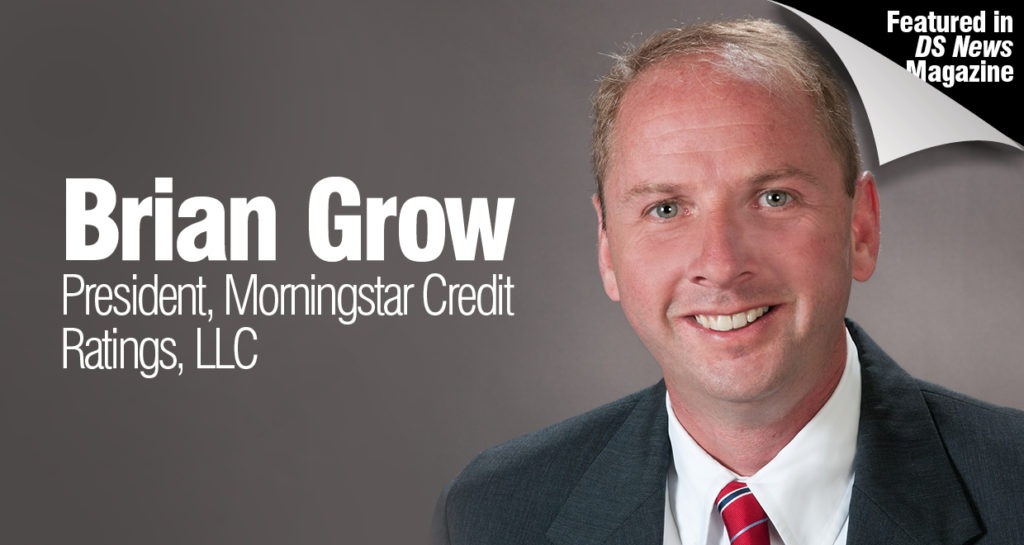 Editor’s note: this feature originally appeared in the April issue of DS News, out now.

In his new role, Grow oversees the day-to-day operations of Morningstar’s structured finance, corporate credit, and financial institutions ratings business. Before being named President of Morningstar Credit Ratings on February 13, Grow was responsible for development, implementation, and maintenance of the ratings and surveillance process for residential mortgage-backed securities (RMBS), asset-backed securities (ABS), collateralized loan obligations, and single-family rental securities, as well as management of the related analytical teams. To date, Morningstar has issued a total of 400 rated structured finance transactions representing nearly $250 billion in issuance.

Before joining Morningstar in 2011, Grow spent 10 years in RMBS and ABS ratings and research a Standard & Poor’s. During that time, he formed and managed the rating agency’s RMBS criteria and modeling team, which developed and proposed new approaches to identify and model risk in RMBS transactions. He has also worked for JPMorgan Chase Bank and Cleary Gottlieb Steen & Hamilton, a law firm in New York. Grow holds a bachelor’s degree in economics from St. Lawrence University and a master’s degree in business administration from Yale University.

How would you summarize Morningstar’s approach to business?

Our whole idea and why we're here is to be very flexible and very responsive. Usually, we get to see differentt asset types first, and we're always intellectually curious. The goal here is really to solve problems and identify risks, and that's what we love to do.

What does a typical day look like for you?

First thing in the morning, when we overlap with Indian time, I have a hand-off call with our Mumbai analyst team. Having a U.S. and Mumbai team ensures we are working 24 hours a day. We will talk about what got done overnight, and the U.S. employees will pick it up at that point. I oversee everything that is not commercial real estate, so on some days, we'll have a staff meeting where we go through all of the live deals and then talk about news and what's coming down the pipeline. I'll usually field the phone calls from issuers or investors, and then I spend a lot of my day problem solving with anything that comes up in transactions, and I'll work with our analysts to solve those problems.

I also spend a lot of time focused on regulatory and compliance matters, making sure that we're following all the rules and then training my analysts on this. Many weeks we have a diligence visit where we'll visit counterparties to these deals, such as originators or servicers. That’s what a typical day and week look like for me.

Your day sounds busy and varied, what do you consider the most rewarding aspect of your role?

The constant learning. Learning new asset types is what got us involved with single-family rental—we heard about it, and then we dove in and learned everything we could. It’s the same with all other ABS asset types. I love studying different businesses and a whole business deal, and there's just a constant learning curve when you're a rating analyst.

What criteria does Morningstar use when initially rating a pool of loans?

It always depends on the asset type. For consumer assets, like residential mortgages or auto loans, we'll look at borrower characteristics—a borrower’s FICO score; their debt, income, and other assets; if they have any cash reserves, etc.

Many macroeconomic factors go into our analysis, like interest rates and house prices. If it's a new asset, we'll look at historical performance data and see how the asset or the borrower performed in good times and in bad times. And if there's no data, we'll look at similar types of assets and try to triangulate how we think the asset is going to perform.

Then, we also look at the originator for these types of pools of loans and their underwriting process.

How did the ﬁnancial crisis impact this process?

We built the entire rating process from the ground up after the crisis trying to address things that we learned. For example, today’s models contain a lot more data. We have data going through the recession, but our analysts also scrutinize those model results because we learned through the crisis that you can't just rely on a model. There's a whole bunch of things outside the model that you need to look for, like different risks and other factors that weren't really in the scope when Morningstar developed the model.

Compliance with regulations and policies, many of which developed post-crisis, is also part of our focus. We have a new set of internal controls that we've built into our process, and it helps us comply with all the rules.

What safeguards are in place that allow you to mitigate for economic downturns?

The internal controls I just mentioned are designed to protect us and to make sure we're doing the right thing. We’ve also built the rating framework to address different economic scenarios. For example, when we rate a bond single B, we expect it to survive a benign economic environment. And then we defined our single A to survive the worst economic experience that we have in the data, which is usually the recent recession. We're trying to build our criteria so it’s transparent in the bonds we rate and what kind of economic scenario they can survive.

How did Morningstar get involved with looking at single-family rental securities?

The single-family rental (SFR) market came from the vast foreclosure inventory after the recession. Around 2010, some investors started buying up as much distressed inventory as they could get, usually through auctions. By 2012, they were talking about obtaining financing through the capital markets, and they looked to us because securitization was one of the options. The Morningstar RMBS team was really in its infancy, but I hired a deep bench of seasoned analysts who were curious and eager to analyze a new asset type. We also had the advantage of being a historically commercial mortgage-backed securities (CMBS) rating agency, and so we had CMBS analysts sitting right next to us. We started analyzing these deals, and we saw that most of the risks were either similar to RMBS or residential or multi-family CMBS.

We began publishing thought leadership commentaries and became sort of the go-to rating agency for the market.

The methodology breaks down two key factors, which are property value and net cash flow. We haircut property values based on the type of property, location, and different rating stresses, as well as various economic simulations and then we also underwrite our net cash flow based on a forecast of the manager's performance on things like vacancies, expenses, and cap ex. We base our value projection on the RMBS framework and our net cash flow underwriting on the CMBS multi-family underwriting.

Has Fannie Mae’s and Freddie Mac’s recent launches into the SFR space impacted your rating process?

One thing that Fannie Mae specifically added to their deal was this concept of substitution, the property manager could substitute properties into the pool, and the Fannie deal allowed for that flexibility. So that's starting to creep into deals that we rate. There's only been one Fannie deal to-date, and if this model were to take off, it would affect our volume, as they are probably not going to need ratings. If the Freddie type of model takes of, then where they're financing the multi-borrower multiloan type of deals, they could utilize ratings to transfer some of the risks like they would with the STACR CRT deals or the K series multifamily deals.

We've been pretty active in that space. After the financial crisis, many borrowers who were struggling had their loans modified, and then these loans either re-defaulted or became current. Now, we are starting to securitize those re-performing loans, which is how this new market arose. Eventually, the market will shrink as the number of non-performing borrowers left over from the crisis declines and house prices increase, which reduces the number of borrowers that are underwater.

The current pools are pretty varied across shelves or issuers. Some pools are made up of borrowers that are mostly underwater, and other pools have different loan types like second liens or manufactured housing. We do a loan level analysis on all our RMBS securities, and our loan level access becomes important in RPL deals because we can really differentiate risks associated with individual loans, which lets us distinguish individual issuers and deals.