The number of hires in the U.S. increased from 4.7 million in August to 5.0 million in September, their highest level since December 2007. The hires rate, which is the number of hires during the entire month as a percent of total employment, was 3.6 percent in September. Total separations, which include quits, layoffs, discharges, and other separations which may include death, disability, retirement, for the month of September rose up to 4.8 million from August's total of 4.5 million.

The Consumer Financial Protection Bureau announced that it has ordered California-based residential mortgage lender Franklin Loan Corporation to pay $730,000 in restitution for rewarding its employees with bonuses for suggesting loans with higher interest rates to borrowers. The CFPB's investigation found Franklin Loan's actions of paying bonuses to employees based on interest rates to be in violation of the Federal Reserve Board's Loan Originator Compensation Rule, which prohibits mortgage lenders from compensating its loan officers based on loan terms.

The Role of Consumer Data in the Servicing Sector

Analyzing Trends in the Appraisal Space 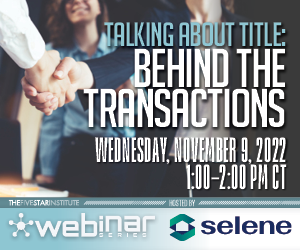 An upcoming Five Star webinar, presented by Selene Title, will tackle the topic of title and its critical role in the single-family rental, build-for-rent, and bulk transaction marketplaces. Click through to learn more and register to attend this event.