Epiq, an Atlanta-based provider of intelligence to the legal services industry, has released its December 2021 bankruptcy filing statistics from its AACER subsidiary which found that filings declined by 4.7% last month representing 27,957 filings of all types, up from the 29,328 seen is November.

Breaking the data down, Chapter 13 individual bankruptcies have now seen two months of declines after rising for six months. December saw 10,024 new filings—this number is now down 2.7% since November when 10,306 new filings were recorded.

However, Chapter 11 commercial filings saw 309 new filings, an increase of 56.1% over November when 198 filings were recorded.

“December individual bankruptcy filing activity continued to trend down as has been the pattern since the COVID-19 global pandemic manifested in the U.S. in March 2020. Commercial filings spiked up sharply month-over-month, but levels continue to be way off pre-COVID-19 levels,” said Chris Kruse, SVP of Epiq Bankruptcy Technology. 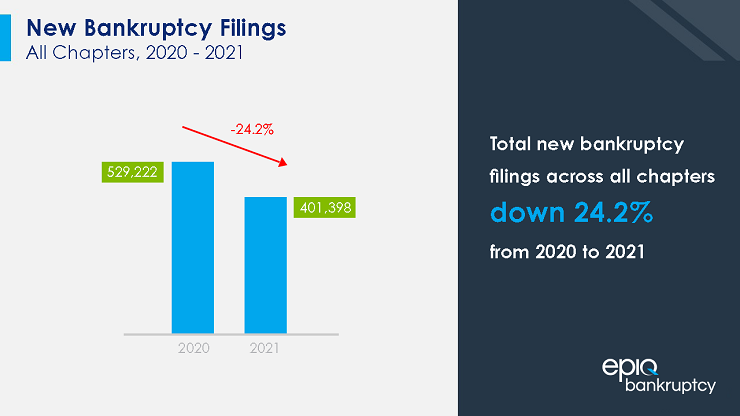