The announcement was made by U.S. Attorney General for the District of Columbia Ronald Machen, Inspector in Charge Gary Barksdale of the Washington Division of the U.S. Postal Inspection Service, and Special Agent in Charge Cary Rubenstein of the Mid-Atlantic Region of the Office of the Inspector General of the U.S. Department of Housing and Urban Development (HUD-OIG).

Brian Thompson, 54, of Washington, D.C., pleaded guilty to one count of wire fraud in October 2014 in the U.S. District Court for the District of Columbia. Thompson perpetrated his scheme from May 2013 to March 2014 while he worked for HUD's Office of Loan Guarantee for Native American Programs, according to a statement of offense signed by the government and the defendant. According to multiple media reports, Thompson was able to gain employment with HUD as a loan guarantee specialist despite having a prior criminal record that spanned more than two decades. According to reports, HUD officials are examining their background check process to find where the breakdown occurred to allow Thompson to gain employment with the agency.

As a loan guarantee specialist for HUD, Thompson's duties included selling HUD REO properties for the best possible price in order to regain the money the government paid to the lender for the insured loan. During a nine-month period from June 2013 to March 2014, Thompson sold five parcels on behalf of HUD for a combined total of $843,000 and diverted the money to his own personal bank accounts. He then submitted fraudulent settlement statements in order to conceal his personal increase from the transactions.

"Brian Thompson will be a federal inmate because of his crooked dealings," Machen said.  "He ripped off the taxpayer and harmed the integrity of program designed to help underprivileged Native American homeowners.  Public service is a calling, not a get-rich-quick opportunity.  I want to thank the other public servants at the Office of Native American Programs who came forward and raised concerns about Thompson’s conduct."

In addition to serving the prison time, Thompson was ordered to pay the federal government $843,000 in restitution, and he will be placed on three years of supervised release after completing his prison term. He is also subject to a forfeiture money judgment of $645,700 in addition to the more than $150,000 that has already been sized from his financial accounts.

"As today’s sentence demonstrates, those who attempt to defraud the U.S. government will be held accountable," Barskdale said. "Postal Inspectors applaud the efforts of its law enforcement partners at HUD-OIG.  Our combined efforts brought the individual responsible for this crime, which involved the U.S. mail system, to justice." 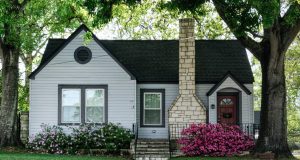 An analysis of Q1 foreclosures by ATTOM Data Solutions has found that there were a ...