Mortgage Incomes Down in Q4 for U.S. Bank, PNC

Both U.S. Bancorp and PNC Financial Services experienced slight declines in net income for the fourth quarter of 2015, and the results for mortgage banking revenues at both banks followed right along, according to Q4 earnings statements for both banks released on Friday.

Despite the increase in loan volume, however, mortgage banking revenue for U.S. Bancorp totaled $211 million in Q4, down over-the-quarter from $224 million and over-the-year from $235 million. The decline in mortgage banking revenue was primarily due to “an unfavorable change in the valuation of mortgage servicing rights, net of hedging activities,” according to the statement. Overall noninterest income was down by $30 million over-the-year for U.S. Bancorp (from $2.370 billion down to $2.340 billion), though it did increase over-the-quarter by $14 million.

“As we look to 2016, we are well positioned to continue providing quality products and services to our customers and exceptional value to our shareholders from a position of strength and stability that our stakeholders have come to expect from U.S. Bancorp,” U.S. Bancorp Chairman, President, and CEO Richard K. Davis said.

For PNC, residential mortgage banking noninterest income decreased $12 million primarily as a result of lower loan sales revenue. Residential mortgages totaled $113 million in the fourth quarter of 2015, down from last quarter's number of $125 million and last year's number of $135 million. Mortgage loans declined despite an increase in total loans PNC by $1.7 billion as of December 31, 2015 compared with September 30, 2015. 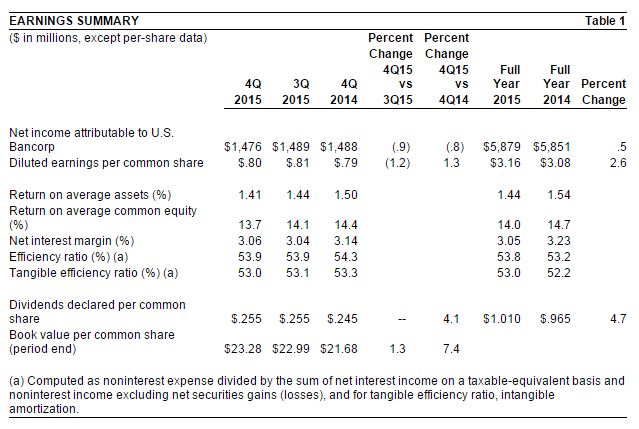 “PNC delivered consistent, quality results and advanced our strategic priorities in 2015,” said William S. Demchak, Chairman, President and CEO. "We increased fee income, reduced expenses and managed a strong balance sheet that will benefit from rising interest rates heading into 2016. Our strong capital position enabled us to increase the amount of capital returned to shareholders in 2015. We’re positioned to continue to drive long-term value through our execution in 2016 and beyond.”

Overall for U.S. Bancorp, the Q4 2015 earnings statement showed that its net income for the fourth quarter of 2015 totaled $1.476 billion, or $0.80 per share, down slightly from $1.488 billion, or $0.79 per share reported in the fourth quarter of 2014. Factors in the slight decline were a higher provision for credit losses and lower noninterest income, according to the statement.

Despite the overall decline in profits for U.S. Bancorp, Davis called the bank’s performance “remarkable,” stating that 2015 was “a year underscored by persistent and historically low interest rates, modest economic growth, and increasing regulatory requirements. More than any year in recent history, 2015 required strong management focus as we balanced decisions on operating efficiencies with opportunities for investing in future growth and addressing our customers’ needs. U.S. Bancorp rose to that challenge, delivering record net income and diluted EPS for the year and continuing with industry-leading performance metrics.”

U.S. Bancorp started off 2016 on a positive note when earlier this week, HUD dismissed a complaint filed in 2012 by the non-profit National Fair Housing Alliance accusing the bank of racial discrimination in maintaining REO properties.

According to PNC’s Q4 earnings statement, the bank’s 2015 total net income was $4.1 billion, or $7.39 per share, down slightly from 2014’s profits of $4.2 billion, or $7.30 share. The bank’s fourth quarter earnings also ticked down year-over-year from $1.1 billion ($1.90 per share) in Q4 2014 down to $1.0 billion ($1.87 per share) in Q4 2015. PNC stated that its fourth quarter results reflect “revenue growth over the third quarter in both net interest income and fee income, a continued focus on disciplined expense management, and higher loans and deposits.”