Why Are Agency First-Time Buyer Mortgages Getting Riskier?

Agency first-time buyer loans were significantly more at risk of default in December 2015 than they were over the previous December, according to the Agency First-time Buyer Mortgage Risk Index (FBMRI) for December 2015 released Tuesday by the AEI International Center on Housing Risk. 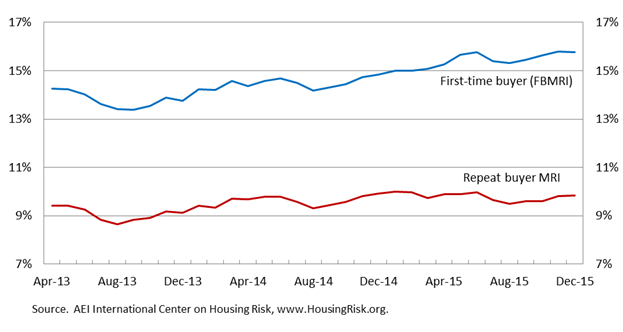 “Given the combination of little money down and slow amortization, these buyers will have very little home equity for a number of years unless their house appreciates substantially,” the report stated.

Meanwhile, home prices are rising at a faster rate than household incomes due to a number of factors, including historically low mortgage rates (which began the year at below 4 percent), an improving labor market, and a seller’s market for existing homes that is 39 months long and counting. Despite this, the Agency First-time Buyer Mortgage Share Index (FBMSI) rose year-over-year by more than a full percentage point in December 2015 from 55.5 percent up to 56.7 percent, meaning that first-time buyers accounted for 56.7 percent of primary owner-occupied home purchase mortgages with a government guarantee. This translated to approximately a 10 percent increase in the number of primary owner-occupied purchase mortgages for first-time buyers, up from 113,000 to 124,000, according to AEI.

The Combined FBMSI, which includes both government-guaranteed and private sector mortgage loans, also rose by a full percentage point year-over-year in December 2015 from 50.2 percent up to 51.2 percent.

Previous: With Settlements Behind Them, Morgan Stanley and Bank of America Post Solid 2015 Results
Next: Economist: TRID is Not Affecting Housing Market Potential