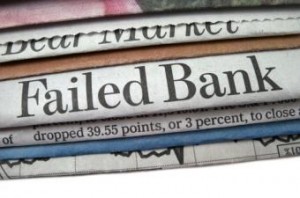 West Chicago's DuPage National Bank has the dubious honor of being the first FDIC [1]-insured institution to close in 2014.

The agency announced Friday the bank's closure by the Office of the Comptroller of the Currency [2] (OCC).

To protect depositors, FDIC announced a purchase and assumption agreement with Republic Bank of Chicago [3], which has agreed to pay a premium of 1.20 percent to assume all of DuPage National's deposits (estimated at $59.6 million as of Q3 2013) and "essentially all" of its assets.

The steady downward trend of bank failures in recent years suggests that, barring any major financial shocks to the country, 2014 will see a short list of collapses. In 2011, FDIC reported 92 bank failures; that number nearly halved to 51 in 2012, which in turn dropped to 24 last year.