Home / Daily Dose / How Much of Rising Household Debt is Mortgage-Related?

How Much of Rising Household Debt is Mortgage-Related?

The Federal Reserve Bank of New York’s latest quarterly snapshot of borrowing trends and indebtedness shows that U.S. household debt was up by $51 billion in Q4 of 2015, though little of that debt was in any stage of delinquency.

The bank’s Quarterly Report on Household Debt and Credit, released Friday, showed what is, overall, a modest increase in U.S. household indebtedness. Overall debt, counting mortgages, HELOCS, credit cards, student loans, and auto loans, reached $12.12 trillion by the end of 2015, according to the report, which also found that only 5.4 percent of that debt was in serious trouble. While this was the lowest percentage of overall debt since the middle of 2007, that percentage still adds up to about $1.14 trillion.

The Fed attributed the debt growth partially to flat mortgage balances. According to the report, balances on home equity lines of credit continued a decline that began more than four years ago, and which fell last quarter by $5 billion. 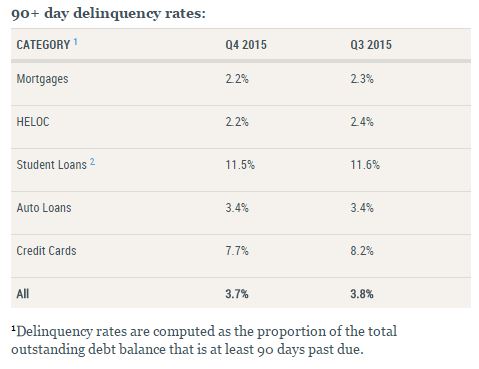 New loan originations continued at a tempered pace, and mortgage originations decreased slightly from the third quarter, to $437 billion. Fifty-six percent of all new mortgage balances went to borrowers with credit scores above 760.

Further upbeat news is that overall delinquency rates driven largely by mortgages, improved last quarter, according to the report.  Just 2.2 percent of mortgage balances were delinquent  for 90-plus days, up from the third quarter’s 2.3 percent. Overall 90-plus-day delinquencies dropped to their lowest level since the beginning of 2008.

“Non-housing debt balances have been rising, but the same cannot be said for mortgages,” said Andrew Haughwout, senior vice president at the New York Fed. “Mortgages are being paid down faster, helping to offset the generally rising volume of originations.” 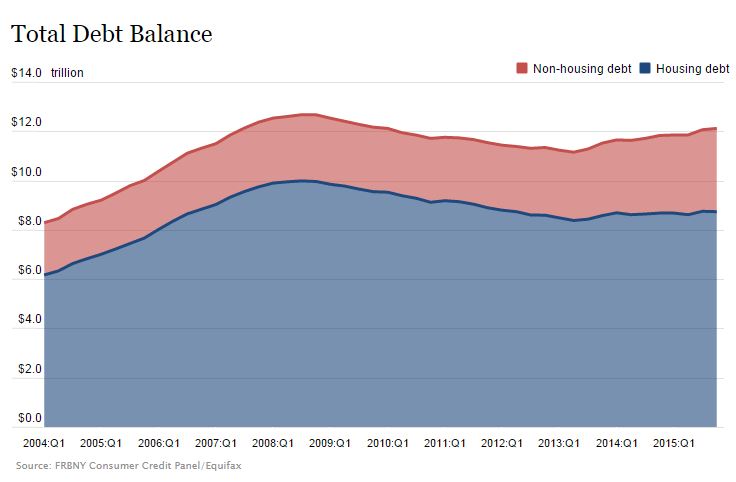