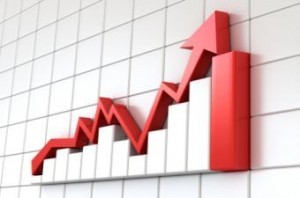 The state of the U.S. economy has been questionable since the start beginning of the year, while the gross domestic product (GDP) has been on a downward spiral for the last two quarters. Was the slowdown in GDP growth an early indicator of the negative state of the economy and slowly growing housing markets?

The Bureau of Economic Analysis (BEA) reported Friday in their “second” advance estimate for the fourth quarter of 2015 that economic growth moved up slightly to an annualized rate of 1.0 percent, up 0.3 percentage points from the first estimate of 0.7 percent.

The buzz among economists last month when the 0.7 GDP was announced was that the setback was temporary and that the economy will bounce back quickly.

“The slowdown in GDP growth to a very modest 0.7 percent annualized in the final quarter of last year is a temporary blip,” Capital Economics said. “With employment increasing by a monthly average of 284,000 during that quarter and final sales to domestic purchasers rising at a more acceptable 1.6 percent rate, we do not believe this is the start of a more serious downturn. GDP growth was 2.4 percent for 2015 as a whole and we anticipate a 2.5 percent gain in 2016.” 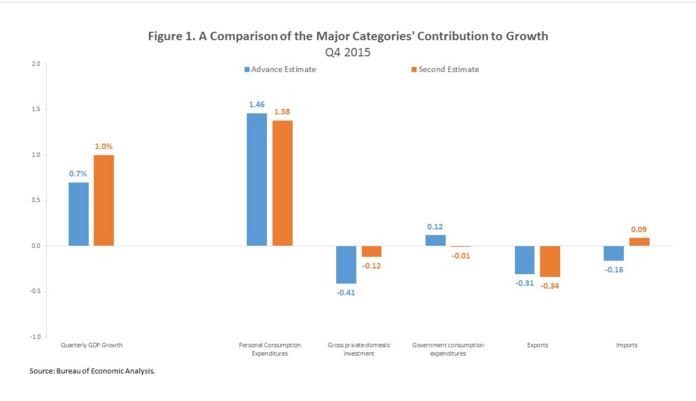 Real GDP growth has been on a drastic decline since it rose 2 percent in the third quarter of 2015 and 3.9 percent in the second quarter. However, the small increase in GDP growth in the fourth quarter “reflected positive contributions from personal consumption expenditures (PCE), residential fixed investment, and federal government spending that were partly offset by negative contributions from exports, nonresidential fixed investment, state and local government spending, and private inventory investment,” while “imports, which are a subtraction in the calculation of GDP, decreased,” the report said.

Paul Ashworth, Chief U.S. Economist at Capital Economics said, “While the upward revision to headline GDP growth is better than nothing, particularly as the consensus forecast was for a downward revision to 0.4 percent, the bottom line is that fourth-quarter GDP growth was still pretty modest. Furthermore, the weaker drag from inventories in the fourth quarter means that any rebound in the first quarter could be slightly more modest than we previously expected. Nevertheless, it still appears that first-quarter GDP growth is on track to rebound to a very healthy 2.5 percent annualized or higher, which should dampen any concerns about an imminent recession.”

The Bureau emphasized that the advance estimate for Q4 is based on incomplete data and is subject to further revisions; the second estimate, based on more complete data, will be released March 25, 2016.

As far as housing is concerned, the market has slowed a bit but is still pressing forward, despite the dramatic decrease in GDP growth. 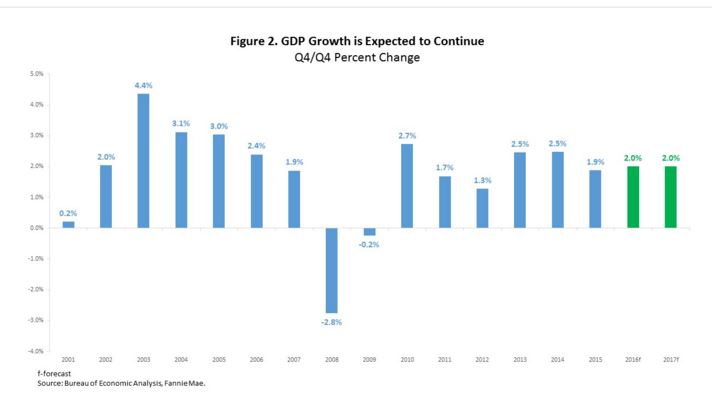 After suffering a major drop in November 2015 and recovering with the largest monthly increase ever recorded in December, existing-home sales seem to have found their balance to start the new year.

The existing-home sales report from the National Association of Realtors (NAR) proves that lenders are well on the path to recovery from TRID delays.  The report found that existing-home sales increased 0.4 percent to a seasonally adjusted annual rate of 5.47 million in January from a downwardly revised 5.45 million in December. Existing sales are now 11.0 percent higher than a year ago, the highest annual rate in six months and the largest year-over-year gain since 16.3 percent July 2013.

"The housing market has shown promising resilience in recent months, but home prices are still rising too fast because of ongoing supply constraints," said Lawrence Yun, NAR Chief Economist. "Despite the global economic slowdown, the housing sector continues to recover and will likely help the U.S. economy avoid a recession."

Although month-over-month movement among housing starts was low in January, year-over-year movement was encouraging, if not remarkable. The numbers are the best 12-month-overall figures in almost a decade, showing that privately-owned housing units authorized by building permits in January were at a seasonally adjusted annual rate of 1,202,000. This is a mere 0.2 percent below the revised December rate of 1,204,000, but is 13.5 percent above the January 2015 estimate of 1,059,000. There were 731,000 single-family housing starts in January, 4 percent lower than in December, while there were 1.5 million privately-owned housing completions in January, which is down 2 percent from December but 8.4 percent over the year prior.

“The key findings from today’s report is that month-to-month we’re seeing little change in new construction, but year-over-year there is solid growth,” Smoke said. “In addition, permits remain higher than starts, which is a good sign for expansion ahead."