HUD has helped millions of struggling homeowners avoid foreclosure and stay in their homes with the completion of more than 10.2 million modifications and other forms of assistance arrangements since April 2009 (as of January 2016), according to HUD’s February Scorecard released this week.

According to HUD, more than 2.5 million of these actions assisting homeowners have taken place through the Making Home Affordable (MHA) program, which was launched in February 2009 in response to the housing crisis. MHA is scheduled to end on December 31, 2016, and the Department of Treasury released its first set of guidelines to servicers for MHA termination earlier in March. 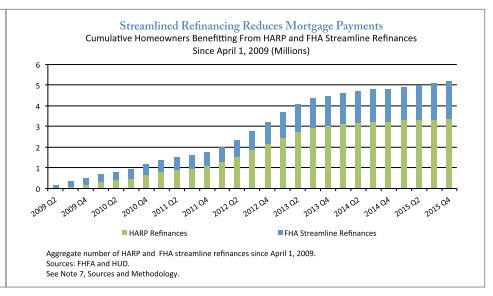 “These Administration programs continue to encourage improved standards and processes in the industry, with lenders offering families and individuals more than 4.6 million proprietary modifications through December,” said Katherine O’Regan, Assistant Secretary for the Office of Policy Development & Research at HUD. “Although there is good news overall, the Administration remains committed to helping more Americans realize their dream of home ownership through an improving economy and new programs that will provide greater access to credit.”

Citing data from the National Association of Realtors, HUD also reported that in January, existing homes rose to their second-highest pace since 2007, increasing by 0.4 percent up to a pace of about 5.47 million units annually—an 11 percent year-over-year increase. Existing-home sales have sold at a rate of more than 5 million annually for 10 of the last 11 months. Housing prices were up by 5.6 percent over the previous six months and are 1.2 percent above the peak reached in March 2007, according to data from the Federal Housing Finance Agency.