This month marks the two-year anniversary of the coronavirus pandemic, which the World Health Organization officially declared on March 11, 2020. According to a new report from Redfin, the housing market has changed drastically as there are now half as many homes to choose from, as prices increased 34%. Overall, the number of homes on the market is down 49.9% from 2020 to a record low of approximately 456,000.

Remote work and record-low mortgage rates motivated scores of Americans to relocate during the pandemic, intensifying a housing shortage that began in the wake of the 2008 financial crisis. With few homes available to purchase, house hunters have waged fierce bidding wars, causing prices to rise. The median home sale price is now $369,125, the highest on record and up 33.6% from $276,225 in 2020. That’s a significantly larger jump than the prior two-year period, where home prices grew an estimated 10%. 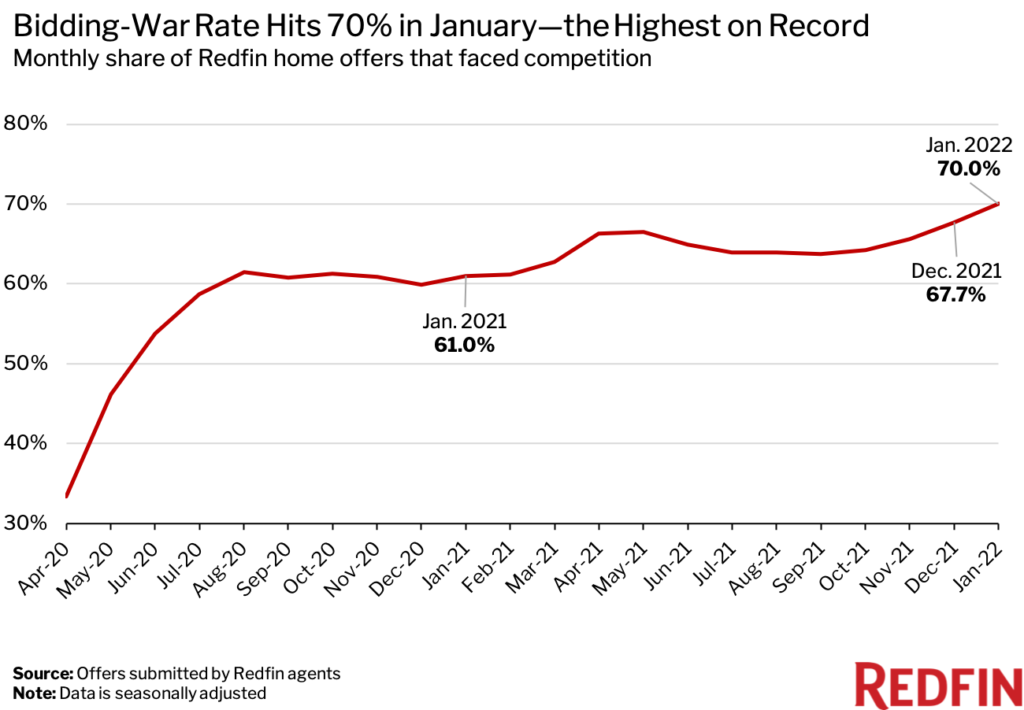 A record 70% of home offers written by Redfin agents faced bidding wars on a seasonally adjusted basis in January. That’s up from 33.4% in April 2020, the earliest month in Redfin’s records. An offer is considered part of a bidding war if a Redfin agent reported that it received at least one competing bid.

Some 32.4% of Redfin.com users nationwide looked to move to a different metro area in January, up from the previous peak of 31.5% in Q1 of 2021, and significantly higher than before the pandemic.

The most popular destinations in January were Miami, Phoenix, Tampa, Sacramento, and Las Vegas. Relatively affordable, warm metros usually top the list, and have only become more popular during the pandemic as people have left expensive coastal markets in search of lower prices and more space in the Sun Belt. San Francisco, Los Angeles, New York, Seattle and Washington, D.C. were the top metros homebuyers looked to leave in January. 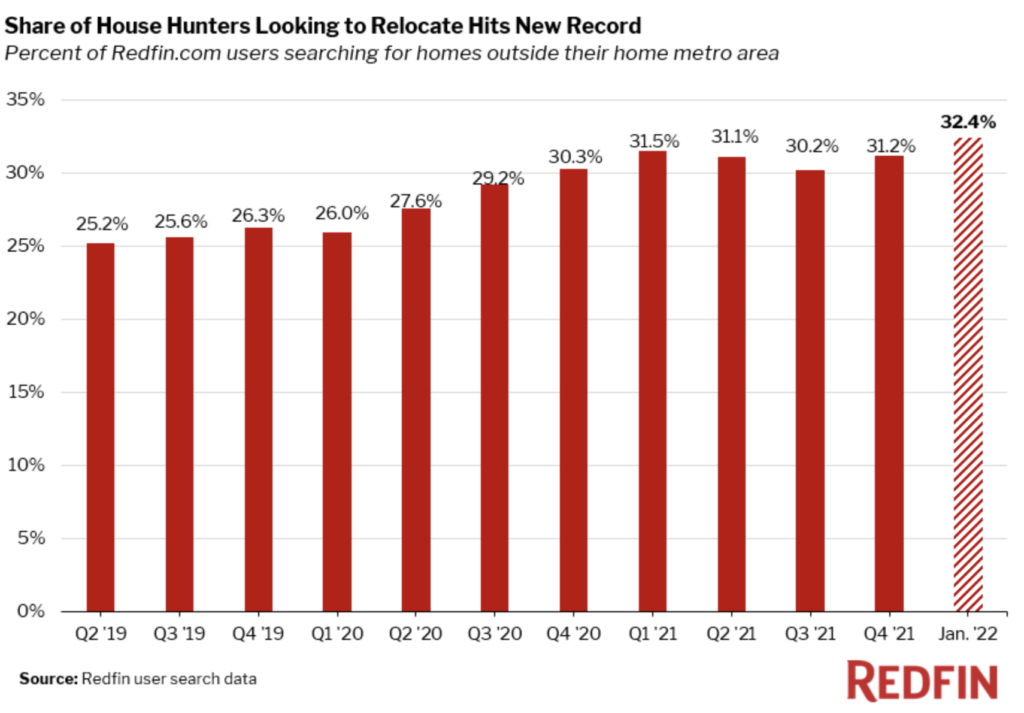 Mortgage rates are back above pre-pandemic levels after hitting an all-time low of 2.65% in January 2021. The average 30-year fixed mortgage rate was 3.76% during the week ending March 3, 2022, according to the latest data from Freddie Mac. That’s up from 3.29% two years earlier, when early signs of the pandemic had already started to put downward pressure on mortgage rates. Rates surged at the end of 2021, though they’ve dropped slightly in recent weeks as Russia’s invasion of Ukraine has shaken global financial markets.

Homebuyer demand for second homes was up 87% from pre-pandemic levels in January—the most recent period for which data is available. That’s the highest level in a year and just shy of the record 90% gain in September 2020. It’s worth noting that preliminary February data suggests second-home demand slowed as mortgage rates jumped.