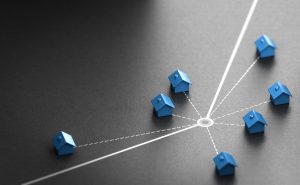 The U.S. Census Bureau and the U.S. Department of Housing and Urban Development have announced the following new residential sales statistics for February 2022, and found that sales of new single‐family houses were at a seasonally adjusted annual rate of 772,000, 2% below the revised January rate of 788,000, and 6.2% below February 2021’s estimate of 823,000.

"New home sales slipped 2% in February to a pace of 772,000 following a dip in existing home sales, as economic adjustments and rising geopolitical tensions took a bite out of the impact of impressive job gains and a record low post-pandemic era unemployment rate,” noted Danielle Hale, Chief Economist for Realtor.com. “Even though the Fed only adjusted the target for short-term rates last week, mortgage rates hit a series of new highs in the first half of February, which tempered briefly around the time of Russia’s invasion of Ukraine. New home sales lagged the year-ago pace by 6.2%.”

As mentioned by Hale, it had been a span of 732 days since the Fed cut interest rates, but last week, raised the nominal interest rate by 25 basis points to 0.25-0.50%. The quarter-point rate increase came as data showed inflation reaching nearly 8% in February (representing the steepest rise in prices since 1982), initial jobless claims coming in at 227,000 for the week ending March 5, and rent, housing, and fuel prices continuing to rise.

After a three-year hiatus, mortgage rates began to eclipse the 4% mark, as last week, Freddie Mac reported that the 30-year fixed-rate-mortgage (FRM) hit 4.16%, up 31 basis points over the previous week.

“A large number of young hopeful homeowners have already hit the market ahead of the official start of spring, and are especially eager as rents continue to rise,” said Hale. “But with the median sales price of new homes up 10.7% to $400,600, and only roughly one in 10 new homes sold for less than $300,000, compared with three in 10 new homes in this price range last year, a new home is not an option for many first-time homebuyers even before the impact of higher mortgage rates is considered.”

Further pressing matters is the lack of inventory and short supply that remains, as HUD and the Census Bureau reports the seasonally‐adjusted estimate of “For Sale Inventory” at the end of February was 407,000—a supply of 6.3 months at the current sales rate.

“Builders continue to face delays from supply chain bottlenecks,” said Kushi. “By stage of construction, the share of completed homes sold was 26.4%, up from 24.8% one year ago, but still low compared with pre-pandemic levels. The share of homes under construction sold increased from 41.8% to 46.5%.”

With supplies a top concern of builders, the latest Producer Price Index (PPI) from the Bureau of Labor Statistics (BLS) found that building material prices increased 20.4%, year-over-year, and have risen 31.3% since January 2020.

“Builders face supply-side headwinds that make it difficult and more costly to build,” said Kushi. “These costs are passed onto the buyer in the form of higher prices. In a rising rate environment, that makes affordability a big challenge for potential buyers.”

Hale added, “The total months’ supply of new homes ticked up to 6.3 months amid a slower sales pace and remains higher than 1.7 months’ supply for existing homes. However, the number of months a completed home sits for sale is just 2.5, tying October’s all-time low and highlighting how fast-moving the market remains.”

Doug Duncan, Chief Economist at Fannie Mae, noted, "On the positive side for housing supply, the number of new homes available for sale rose 2.3% in February to 407,000 units. However, the increase was due almost entirely to homes that have not been started, which reached a record high of 106,000 units. This points to potential for more homes being built later in the year, but the number of homes sold that are under construction fell 9.1% after a 10.4% drop in January. This suggests some slowing of demand, which should soften further if mortgage rates continue to rise. Even if rising mortgage rates stabilize, affordability constraints are now at a level that is likely increasingly weighing on sales, while further increases in financing costs for homebuilders may also modestly limit the conversion of new lots into completed units.”