While many housing fundamentals have been nearing their pre-recession levels for months or even years in some cases, the nationwide homeownership rate sank to a 48-year low of 63.4 percent in the second quarter of 2015.

By the end of the year in 2015, the homeownership rate had clawed its way back up to 63.8 percent, but the full year of 2015 still represented the 11th consecutive year of decline since hitting an all-time peak of 69 percent in 2004.

Why does the homeownership remain low while other housing fundamentals continue to improve? An analysis from the Federal Reserve Bank of St. Louis titled “If Housing Markets Are Recovering, Why is the Homeownership Rate Still Falling?” provides some of the answers. According to one explanation, the sharp increase in homeownership during the 10-year period prior to 2004 played a role.

“Perhaps this period represented an unsustainable shift of many financially weaker families out of rental housing into homeownership, which subsequently reversed with the bursting of the housing bubble and the onset of the Great Recession,” said Bill Emmons, Assistant VP and Economist with the St. Louis Fed.

From 1968 until the late 1990s, the homeownership rate fluctuated between 63 and 66 percent over the three decades, which is likely the range to expect in the future, according to Emmons.

“Evidence supporting the return-to-normal hypothesis includes greater-than-average declines since 2004 in the homeownership rates of younger, less-educated and nonwhite families—precisely the financially weaker groups that moved into homeownership most rapidly during the housing boom,” Emmons said. 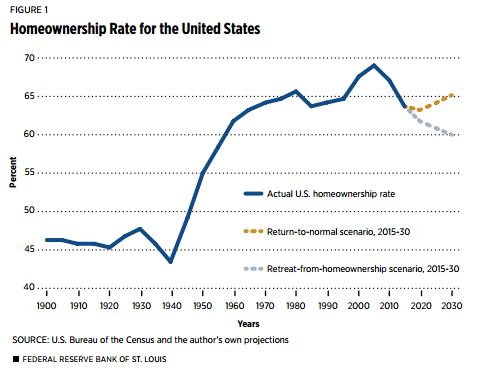 Still another explanation is that homeownership today is not as attractive as it has been in past decades because of fluctuations in home values, the tightened standards for obtaining a mortgage loan, and the fact that many millennials consider the prospect of being “tied down” to a house and the obligations that come with it less attractive than previous generations.