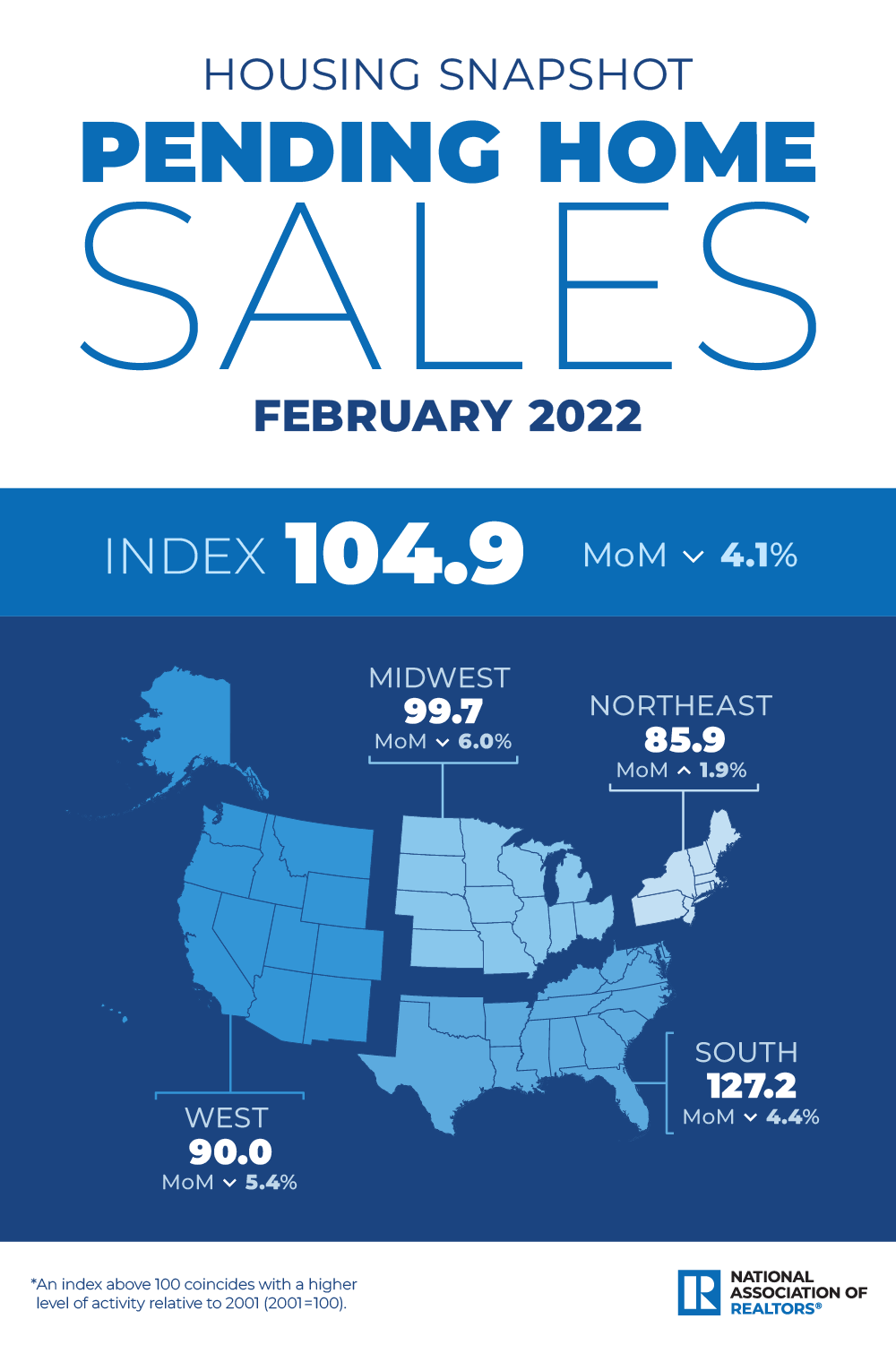 "Pending transactions diminished in February mainly due to the low number of homes for sale," said Lawrence Yun, NAR Chief Economist. "Buyer demand is still intense, but it's as simple as ‘one cannot buy what is not for sale.'"

A combination of rising prices and limited demand played a role in pending sales, as Redfin recently reported median home sale prices were up 17% year-over-year to a record high of $379,230 the four-week period ending March 20, the biggest increase since the four weeks ending Aug. 1, 2021. Prices were up 6% from just four weeks prior.

In terms of inventory, Zillow’s latest report on the nation’s housing supply found that a near record low inventory of 870,000 units was recorded in February nationwide, a 1.7 month’s supply.

“The persistent and historic lack of supply and growing affordability challenges are holding back sales,” said First American Deputy Chief Economist Odeta Kushi. “Inventory turnover, the supply of homes for sale nationwide as a percentage of occupied residential inventory was at a historic low in February. You can't buy what's not for sale, even if you can afford it.”

Another consideration in the drop in pending sales is the anticipated recent spike in mortgage rates, as last week’s Primary Mortgage Market Survey (PMMS) from Freddie Mac found that fixed-rate mortgages (FRMs) rose to 4.42% for the week ending March 24, 2022, up from last week when it averaged 4.16%. Ignited by the Fed raising the nominal interest rate by 25 basis points to 0.25-0.50%, the rise in rates is creating further affordability issues for many in the mortgage marketplace.

"The surge in home prices combined with rising mortgage rates can easily translate to another $200 to $300 in mortgage payments per month, which is a major strain for many families already on tight budgets," said Yun.

“For buyers looking for a home, the higher price came at the same time as speeding inflation not only took more out of each paycheck, but also pushed mortgage rates higher,” said George Ratiu, Manager of Economic Research for Realtor.com. “The net effect, especially for first-time buyers, was a shrinking of their budgets, which only served to narrow available options. As we move into the spring season, markets remain clearly tilted in sellers’ favor. However, with mortgage rates moving toward 5.0%, we are seeing early signs of a shift in housing fundamentals, as many people looking for a home have hit a ceiling on their ability to afford a home.”

NAR noted that higher mortgage rates and sustained price appreciation has led to a year-over-year increase of 28% in mortgage payments.

"Home prices themselves are still on solid ground," Yun added. "They may rise around 5% by year's end, and we should see much softer gains in the second half of the year."