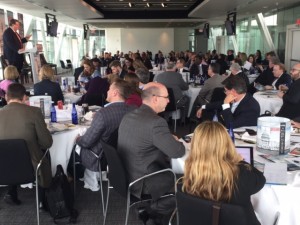 For the seventh consecutive year, leaders from both government and mortgage servicing converged in Washington, D.C. for the 2016 Five Star Government Forum to work together to shape housing policy in America.

“This event [Government Forum]  provides a unique platform to engage mortgage servicers, federal regulators and agencies that seek to establish common ground on the establishment of best practices and solutions, ultimately designed to protect homeownership," Five Star Institute President and CEO Ed Delgado said. “It has been and continues to be a privilege to bring the mortgage industry together to promote these conversations that are for the benefit of all engaged.”

The morning’s events at the Five Star Government Forum included a keynote address from HUD Principal Deputy Assistant Secretary Edward Golding as well as panel discussions on the potential effects of the upcoming presidential election on housing policy (“Changing of the Guard”) and effective strategies for regulators and the industry to work together for the good of the American homeowner (“Meeting in the Middle”).

The afternoon’s activities included a keynote address from Ginnie Mae President Theodore W. Tozer, an update on single-family housing by leaders from Fannie Mae and Freddie Mac, a discussion on the economic indicators that are expected to drive the housing market in 2016, and a discussion on the challenges that communities are facing while still trying to recover from the housing crisis eight years later.