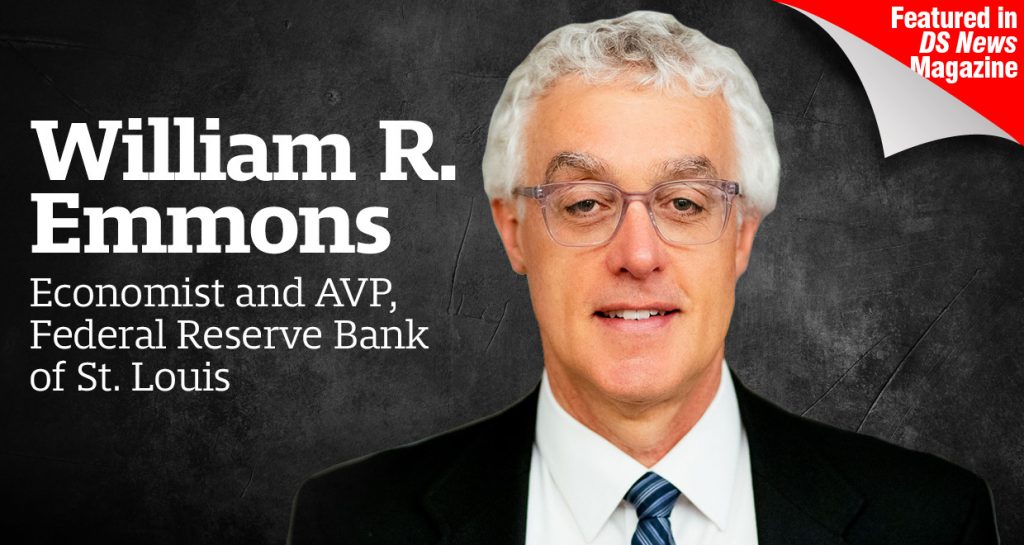 This feature originally appeared in the April issue of DS News.

William R. Emmons is the lead economist with the Center for Household Financial Stability at the Federal Reserve Bank of St. Louis, where he also serves as AVP. His areas of focus at the Center include household balance sheets and their relationship to the broader economy. He also speaks and writes frequently on banking, financial markets, financial regulation, housing, the economy, and other topics.

His work has been highlighted in major publications including The New York Times, The Wall Street Journal, and American Banker, and he has appeared on PBS NewsHour, Bloomberg News, and other national programs.

Emmons received a Ph.D. in finance from the J.L. Kellogg Graduate School of Management at Northwestern University. He received his bachelor’s and master’s degrees from the University of Illinois at Urbana Champaign.

DS News spoke to Emmons about recession threats and economic policy, as well as racial disparities in housing, slow population growth, and the implications of the falling default rate nationwide.

Where is the threat level for a recession now?

Let me start by saying these are my own views. The Fed cut interest rates, and that’s a concern. Also, the Fed cut rates 75 basis points last year. That indicates some concern. The yield curve has been inverted a chunk of last year. Depending on exactly which measure you look at, it inverted again this year. [President of the Federal Reserve Bank of St. Louis] Jim Bullard has pointed to that as a very important recession indicator.

Another index that is informative is the Chicago Fed index, which shows that the economy is probably not in recession as of January. It is at a level that could be close if you go back and look at previous recessions. As long as the job market stays strong and unemployment stays low, we can probably power through without a recession. I would say there are so many straws in the wind right now. This is classic stall speed, tipping point sort of territory right now. The New York Fed, for example, has a model that is based largely on the slope of the yield curve, and they were showing elevated recession probabilities. I think they were pointing toward the middle of 2020 but that was before the virus. So, where’s the threat level? I would say high.

How is the population growth slowdown impacting housing?

As the population growth slows and there are fewer young people, it trickles through in all sorts of different ways. Way down the road, fewer people are entering the job market, and so those things are slower to develop.

This deceleration in population growth is unusual because it’s probably the lowest population growth in peacetime ever. Economists who are looking at demography point to periods of really stressful economic conditions like the Great Depression or a war—that’s when you would expect to see both slowdowns in birth rates and in immigration, but we’re seeing it now when there is no Great Depression. Maybe by 2020, we’ll see some recession conditions.

The point is that both the slowing birth rate and slowing immigration are indicative of some kind of adverse trends about young people not being as optimistic. Foreign potential immigrants are also not as welcome or not as optimistic about coming here as they might’ve been in the past.

I would characterize the housing recovery as mixed. Demand is pretty good. A big question coming out of the housing crash was, would people be frightened of homeownership? It doesn’t look like it.

Opinion surveys show, pretty much across the board, across different demographic groups, people are still interested in becoming homeowners. One simple measure of the demand side is just what’s happening with house prices, which have gone up a fair amount. There’s still support for homeownership, and people want to be homeowners.

The downside, though, is the supply side. Construction costs are worryingly high or growing rapidly. That’s land, labor, and lumber, but also growth restrictions, as well as difficult permitting in some areas that adds huge amounts to the cost. There’s a lot of work being done now—research and analysis pinpointing this problem of providing the supply. It looks different depending on where you are.

In St. Louis, we don’t have much population growth, so there’s not a need for a lot of new housing. I would say a place like this is pretty healthy in terms of demand being accommodated by supply. House prices haven’t risen that much, and I’m thinking of house prices going up as an unhealthy sign either because of these supply problems or unrealistic price expectations. House prices have gone up in Dallas, Houston, and Austin—more than maybe they did even in the 2000s—and affordability measures would still say those markets are getting a little bit pricey for some people, but on average still pretty decent.

Then there are the problem markets, mostly on the coasts where there is strong job growth, but housing supply is just pitiful. They’re just building grossly inadequate numbers of new housing, due in part to building restrictions. One positive from the stability of housing is credit. Underwriting is tighter than it was during the 2000s, and that has the negative implication that some people who would like to be homeowners can’t right now. It also keeps the default numbers down because there are fewer instances of either individuals or families getting into homeownership in a risky way.

Yes, it limits access for some people, but it’s a tough call because you don’t want to limit people’s choices. On the other hand, we know from experience that a big housing bust is extremely costly. And, of course, the people in the default servicing business see things a little bit different because that’s their business, dealing with defaults. Overall for the economy, low defaults are probably better than high defaults if we can maintain some promise that people will have access. But I would say the bottom line is that credit conditions are the main thing that differentiates why we have seen strong price growth.

How are racial wealth disparities translating to housing?

There’s a lot more interest in recent years in this area. There’s the historical background, and then there’s the current ongoing situation. Historically, discrimination and exclusion outright legalized segregation. Redlining has to be the most important historical fact. This brings us to the current situation: even if we were able to get rid of all of the essentially legalized discrimination like redlining, you would still not be back to a level playing field.

For several reasons, current black and Hispanic income levels are lower than those of whites. Wealth is much lower. Even if you were able to eliminate all of the discriminatory practices, lower income and wealth would probably lead to lower rates of homeownership. Then there’s credit access. In the boom of the 2000s, it was almost like the situation had reversed. Instead of providing too little credit access, there was actually too much, and some of it was inappropriate, some of it was missold, and some of it was predatory.

That led to more wealth declines as default rates and foreclosure rates were higher for racial and ethnic minorities. We at the Fed and other agencies have worked hard to try to make credit more available and fairer, but that doesn’t eliminate income and wealth disparities. Even if we believed that there was no redlining, there’s some economists at the Cleveland Fed who have been digging into what you might call “self-segregation.” People of the same income levels tend to cluster together.

If you belong to the Catholic church, you want to live with other people who go to the same church. The same is probably true across racial and ethnic groups or even recent immigrant groups. We know it’s a source of strength for immigrants coming into the country to cluster together in one area. It just seems that’s an aspect of human nature that tends to perpetuate segregation. Some of the historical patterns and embedded disadvantages—low income, low wealth, for example—that means that minority neighborhoods have been more volatile in price. There’ve been bigger swings, bigger foreclosure problems, and longer-term, I’ve seen some evidence that appreciation rates have been lower, typically, in non-white neighborhoods. This sets up a vulnerability for less wealth accumulation.

The Fed is part of this effort to try to bring a lot of these pieces of history and facts into the open, trying to enforce fair access to credit, but it’s a complicated problem. I don’t know that there’s a magic wand you could wave at the problem, but part of making progress is documenting and understanding what the situation is and where it came from before we can hope to make much progress.

What does your day-to-day look like at the St. Louis Fed?

I have three areas of responsibility, and so every day looks a little different, focusing on each of these. One is in our Center for Household Financial Stability.

This is looking at families, especially with a special emphasis on families that have been struggling historically, whether it’s young families, families of color, or those with less education. Within that area, what I’m really focusing more on this year is homeownership. We’re going to do a lot of work on that this year. Another area that I spend a lot of time on is broader monitoring of the economy and financial markets.

I do a lot of public speaking on those topics. The third area is a regular series of briefings for our president on topics that can range pretty broadly but generally are not monetary policy. I’m in the banking supervision division and so we stay away from classic monetary policy topics, but I and my colleagues cover things like financial markets, with a lot of focus on international banking conditions. Every day looks a little different. I enjoy a variety of things to do and feel like I’m always learning from people in each of these areas