Why Will Principal Reduction Benefit So Few Borrowers?

A report from Fitch Ratings released earlier this week indicated that the principal reduction program recently announced by the Federal Housing Finance Agency (FHFA) is expected to have a minimal impact on mortgage servicers.

At the same time, the program is also going to affect relatively few borrowers. The program is extended to approximately 33,000 eligible homeowners when there are approximately three million underwater borrowers nationwide. According to a new report from the Urban Institute, the number of borrowers who benefit might be only a fraction of the 33,000 eligible borrowers the FHFA is trying to reach. In order to minimize expenses to servicers and maximize borrower participation, the GSEs are providing servicers with a list of likely eligible borrowers, and they are offering the principal reduction program through a streamlined modification program that is already in use by the servicers.

“Under this new program, principal is forgiven rather than simply forborne as under the current program,” wrote the authors of the report, Jim Parrott, Jun Zhu, and Laurie Goodman. “Assuming a 9.5 percent take-up rate, which is that of the streamlined modification program already in place, 3,155 borrowers would benefit. If the take-up rate of the new program is double the existing one, 6,310 would benefit.”

Why are so few borrowers going to benefit from the FHFA’s recently-announced principal reduction program?

For starters, only borrowers with GSE loans and borrowers who are seriously delinquent are eligible, which narrows the field down to approximately 408,000 GSE borrowers who were 90 or more days delinquent as of the end of 2015. Only 14 percent of those were 5 percent or more underwater and only 9 percent were more than 15 percent underwater. When the FHFA’s 115 percent LTV cut-off is taken into account, along with applying the criteria that the property must be owner-occupied and the balance has to be less than 250,000, it brings the total down to about 42,000 loans, which is much closer to the FHFA’s estimate of 33,000.

The projected participation numbers in the program are more indicative of an improving economy rather than an overly conservative program, according to Urban Institute. 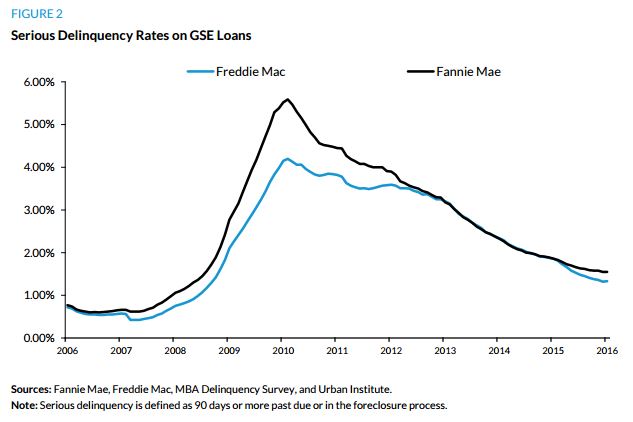 They continued, “The number of seriously delinquent loans has fallen just as dramatically: at Fannie, they have declined from a peak of 5.59 percent in February 2010 to 1.55 percent in January 2016; at Freddie, they have fallen over the same period from 4.2 percent to 1.3 percent. This drop has been driven by liquidations and loan modifications that have brought borrowers current.”

The authors cite research from HOPE NOW that indicates that there have been 7.92 million liquidations and 7.73 million modifications since the third quarter of 2007.

The principal reduction program is still important despite the relatively small number of borrows who will benefit from it, according to the authors, because “it ends the prohibition on principal reduction long maintained by the GSEs. During the throes of the crisis, the GSEs’ refusal to reduce principal stymied efforts by policymakers and industry participants to ease the growing pressure exerted on the fragile market by a rising tide of negative equity. By ending the prohibition, this move finally avails future policymakers of a critical tool to address the needs of distressed borrowers in a distressed market the next time we face that challenge.”