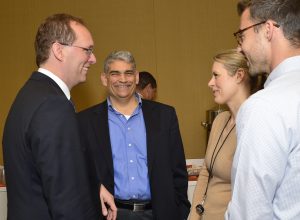 ON Monday, Noreika held his first address to OCC employees, expressing his eagerness to learn the agency.

“When it is running well, it is capable of powering tremendous growth and economic prosperity for consumers, businesses, and communities across the country,” Noreika continued. “But sometimes things do go sideways and the repercussions are felt around the world. Our job is to find that delicate balance where supervision effectively ensures safety, soundness, and compliance while at the same time we don’t waste opportunities through unnecessary burden or an environment so risk averse that banks fail to lend and meet the pent up demand for growth.”

Noreika has been an adjunct faculty member at the University of Pennsylvania Law School and the University of Virginia School of Law. He noted in his statements that he had worked with the 29th Comptroller of the Currency, John Dugan. Noreika stated that the former Comptroller had “helped train me and introduced me to the key issues facing the federal banking system and practicing law.”

In his statement, Noreika mentioned Dodd-Frank, and expressed a desire to evaluate the rules and regulation. Noreika says, “Regulation doesn’t work when it chokes investment, and banks can’t fulfill their public purpose if they can’t support their local customers, business, and communities.”

In Noreika’s closing comments, he mentions the need to “eliminate burdens” and chamion legislation changes.

“I am very optimistic about the future of the federal banking system and this agency,” said Noreika.