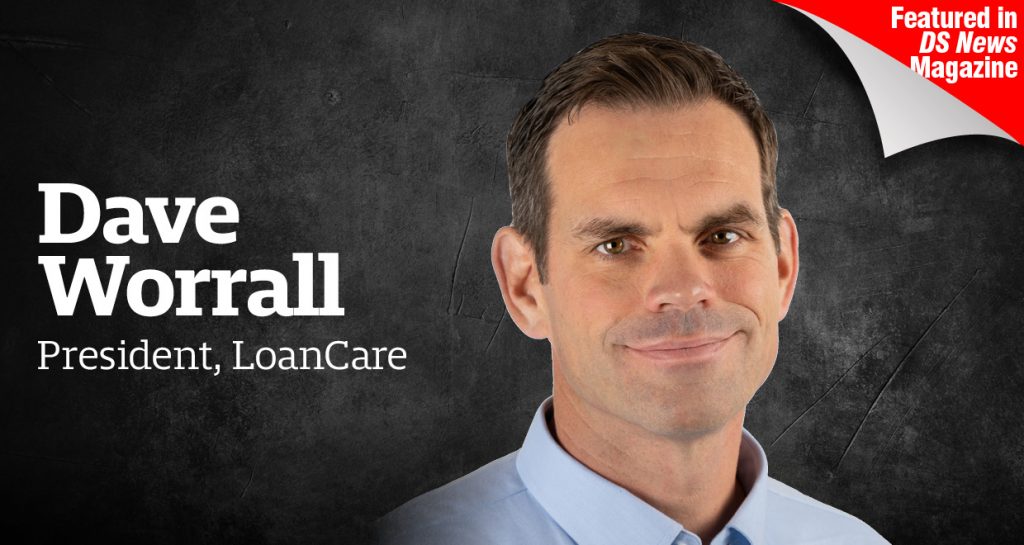 Editor's note: This feature originally appeared in the May issue of DS News.

Dave Worrall leads a team of seasoned loan servicers to not only add value to their clients’ servicing needs but also help them turn bad situations with borrowers into good ones. Prior to joining LoanCare, Worrall was President of RoundPoint Mortgage Servicing Corporation. He has also held senior leadership roles in loan servicing at Citigroup, Fannie Mae, and GMAC-RFC. While at Fannie Mae, he worked directly with the Department of the Treasury on the Making Home Affordable programs. Worrall earned his Master of Business Administration from Texas A&M University and was a Ford Distinguished Scholar while he attended. He also holds a bachelor’s degree in English from Florida State University.

Worrall spoke with DS News on how he is applying his time at Fannie Mae to the current COVID-19 situation, and how to interact with struggling borrowers.

You were a VP in a national servicing organization at Fannie Mae just as the housing crisis began. What lessons did you take away from that experience that can be applied to the current situation?

I thought I'd seen it all back then, and what I realize now is that that was likely good practice for what we're going through right now. It was very different back in 2006 and 2007 when things started to evolve into what became the crisis and the key difference was that there wasn't a lot of infrastructure for dealing with issues like we're experiencing now with the coronavirus.

There were not established programs. There was little coordination between agencies, servicers, federal government authorities, and as things devolved, there was a little bit of a scramble for everybody to organize and deal with the crisis. What's been very heartening this time around with the coronavirus is because of the crisis and the response that we all worked through then, and then you certainly have to think about what seems to be now an annual natural disaster that we all have to deal with, I think we're all very practiced at responding to these kinds of events.

We have established programs with the GSEs and as a result, the service and community is very ready to respond and offer assistance to customers, and probably as important to make sure that our partners, like the agencies and the government, are informed about what's going on with the borrower community.

The important lessons from back then are just coordination, communication, and everybody working together to respond quickly. It is much easier now, because of everything that was put in place back in 2008 and then again as we've gone through these cycles of natural disasters over the last few years.

What policies and procedures should servicers be reexamining now in expectation of upcoming economic turmoil and possible increased default rates?

I think what we're going to find, and unfortunately, it's likely going to be a hindsight issue, is that this is going to be a very different disaster. In contrast to what I just said, where there's a little bit of comfort that we have the infrastructure in place and we can all lean on the tracks we've built to handle hurricanes, and even some of the things that are still in place from when we all dealt with the crisis. This is a problem of very different attributes. It's national. There's no clear beginning and end, at least at this point. It affects all industries. It's a little different when you're gauging, or trying to decide how you're going to prove that somebody was affected. It's a very different type of disaster. This isn't one where you can get a picture of somebody's house and evaluate the damage that's been done.

I think it's really important as we enter into the early stages of the crisis to evaluate everything we do in light of just the differences in dealing with a pandemic. I think early on when we were as a servicer talking to our service providers, and asking them how they were going to deal with things, it was, "Well, we've got our disaster response plan and if things go wrong we'll just move our operations to another location."

I think, again, as people began to understand more about the nature of this particular threat and the fact that we were going to have to do things like a shelter in place and move to work from home, every aspect of a servicers operation is going to have to be customized for this particular issue. So, it's difficult to give anybody a punch list of what you need to do to get ready outside of just make your teams aware that this isn't a hurricane, even though we're using the same infrastructure that we've used to deal with other disasters. They have to really think about why it's different and customize how things are done to address those differences.

What are other key factors to consider when interacting with struggling borrowers in the midst of this crisis?

I think the most important thing that we have seen so far, and again it's really early in the process here for the coronavirus response, but it's the level of panic, and just concern about what to do next, and what's going to happen next, and the rapid pace of information that people are receiving.

In dealing with customers, I think it's most important to understand that when you have a disaster or an event that has a start and a finish, and people know what the impact is, and they know that, for example, their place of employment's been lost because of a wind storm, and that they need to deal with that, and get through it and that their hardship is going to be a certain length as a result of it.

That's a different problem for a customer than not knowing how long this is going to last. There's a different level of compassion that you have to have when dealing with a situation like that. It's important to make sure your teams understand and that. Another angle on it, though, is that you have to understand your teams are going through it too.

A really big difference between this and other events that we've been through is when you deal with a hurricane, you're doing it from the safety of an office that's not been impacted. In this situation, I don't think there's a community in the United States that isn't going to be impacted in some way. You just have to understand that the same people on your team who are helping other people deal with it are potentially the ones being impacted themselves. This is going to be a real different one for us. It's another challenge, though, that I'm sure our industry is going to overcome, and really shine in how we help the nation overcome it.