Two mortgage interest rate indicators released Thursday showed that rates moved upward for the month and over the last week, keeping alive the possibility that the Fed may finally make its move this summer.

For loans closed in late April, the report found that the national average contract mortgage rate for the purchase of previously occupied homes by combined lenders index was 3.75 percent, up 2 basis points from 3.73 percent in March. According to the FHFA, the effective interest rate, which accounts for the addition of initial fees and charges over the life of the mortgage, on all mortgage loans was 3.89 percent in April, up 1 basis point from 3.88 in March.

Freddie Mac's Primary Mortgage Market Survey (PMMS) also showed an increase in average fixed mortgage rates from the prior week, fueling speculation of a summer rate increase from the Fed. 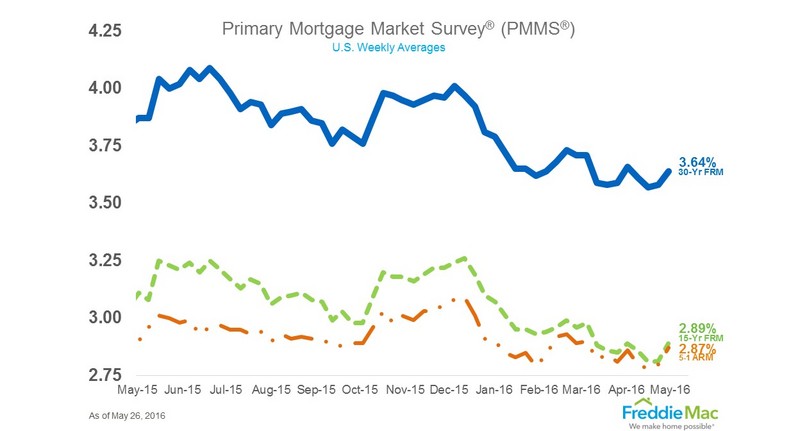 Sean Becketti, Chief Economist at Freddie Mac noted, "U.S. Treasury yields moved up in response to the Fed minutes release, which kept alive the possibility of a summer rate hike. Mortgage rates followed, with the 30-year fixed-rate mortgage increasing 6 basis points to 3.64 percent. Despite this increase, May ends the month averaging only 3.60 percent, 1 basis point below April's average, and the lowest monthly average in 3 years. Homebuyers are taking advantage of these historically low rates with April's new-home sales increasing by 16.6 percent, the fastest pace since January 2008."

Fed governor Jerome Powell, a voting member of the Federal Open Market Committee (FOMC), the Fed's monetary policy-making arm, said in a public address on Thursday that he believes the economy is on "solid footing" and that the economy could be ready for the Fed to raise the federal funds target rate "fairly soon." The next FOMC meeting will be June 14-15, and the following one will be July 26-27.

The FOMC refrained from raising the federal fund rate at the April meeting, even with further improvement observed in the housing sector. However, speculation persists about another rate hike by the Fed in June, which would be the first time the Fed has raised the federal funds target rate since the historic liftoff in December.

As for future rate increases, the FOMC noted that they will take into account measures of labor market conditions, indicators of inflation pressures and inflation expectations, and readings on financial and international developments and continue to monitor inflation changes.

"Participants agreed that their ongoing assessments of the data and other incoming information, as well as the implications for the outlook, would determine the timing and pace of future adjustments to the stance of monetary policy," the minutes from the FOMC meeting said. "Most participants judged that if incoming data were consistent with economic growth picking up in the second quarter, labor market conditions continuing to strengthen, and inflation making progress toward the Committee’s 2 percent objective, then it likely would be appropriate for the Committee to increase the target range for the federal funds rate in June."