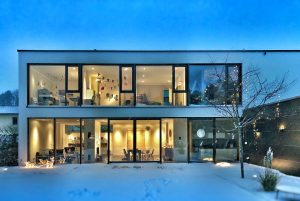 If you thought the trend of purchasing median-priced homes was reaching unchartered territory, a new report from Redfin has found that purchases of high-end and luxury homes jumped 26% year-over-year during the three months ending April 30. That's compared to the 17.8% gain in purchases of affordable homes and the 14.8% increase in purchases of mid-priced homes.

According to the report, this news comes as wealthy Americans have reaped the benefits of a strong stock market, swelling savings accounts and remote work—and as a relative abundance of high-end homes have hit the market, enabling purchases in that segment of the market to flourish.

"So far, the economic recovery from the pandemic has disproportionately benefited Americans with bigger bank accounts," said Redfin Chief Economist Daryl Fairweather. "This means a lot of the demand for homes is coming from folks who are well-off, while many lower-income Americans sit on the sidelines because they've been priced out of the housing market due to surging prices." 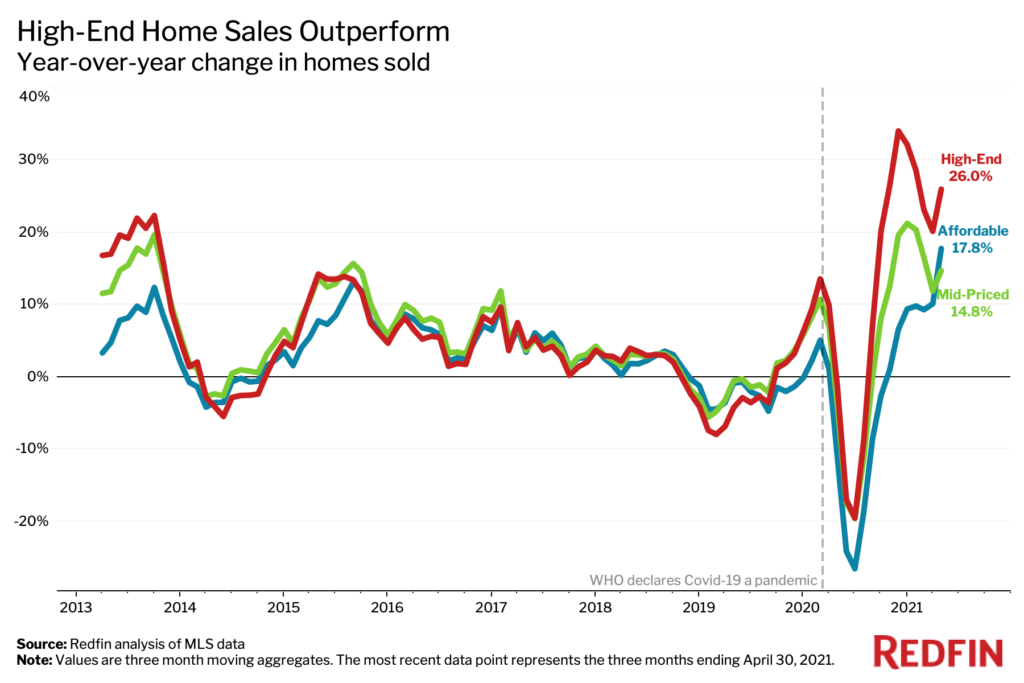 The surge in purchases of expensive properties was led by San Francisco, which saw an 82.4% rise in high-end home sales during the three months ending April 30—the biggest gain among the 50 most populous U.S. metropolitan areas. San Francisco was followed by:

"Growth in high-end-home sales is currently skewed toward some of the most expensive markets in the country—like the Bay Area and parts of Florida—which is fueling an uptick in high-end home prices," Fairweather said. "The high-end sales growth in Florida is being fueled by an influx of affluent out-of-staters, while the gain in the Bay Area is more of a recovery from the massive decline in sales the region experienced at the start of the pandemic when scores of Americans left big cities. Folks may be starting to feel more comfortable putting down roots in major hubs now that they're gaining clarity on post-pandemic life."

Prices of high-end homes in the U.S. rose a record 14.3% year-over-year during the three months ending April 30. By comparison, prices of mid-priced homes climbed a record 12.4% and prices of affordable homes increased 10.2%.

Austin has also exhibited the nation's highest price growth in April, with the median home-sale price increasing 42.3% year-over-year to $465,000 (note that because pandemic lockdowns slowed homebuying and selling in April 2020, year-over-year price growth is somewhat exaggerated).

Outside of Austin, Texas, other markets are seeing buyers forego certain contingencies in order to get into a shrinking supply of homes.

"In the high-end market, we're not only seeing multiple offers—we're seeing buyers waiving appraisal and inspection contingencies, which doesn't normally happen," said Vincent Shook, a Redfin Real Estate Agent in Phoenix. "The biggest driver is the influx of people from California. Still, competition remains toughest for buyers of affordable and mid-priced homes. Some buyers with more modest budgets are coming to me and saying, 'I want a four-bedroom home and here's my maximum price.' I've had conversations where I've had to be brutally honest and tell them that home literally does not exist anymore. It existed eight months ago when they started looking, but they wanted to wait in hopes that prices would come down. Prices didn't come down, and now they're priced out of the market."

Listings of high-end homes rose 19.3% year-over-year during the three months ending April 30—outpacing a 13.9% gain in affordable listings and a 9.1% increase in mid-priced listings.