Home / Daily Dose / A Decade Unlike Any Other

A Decade Unlike Any Other 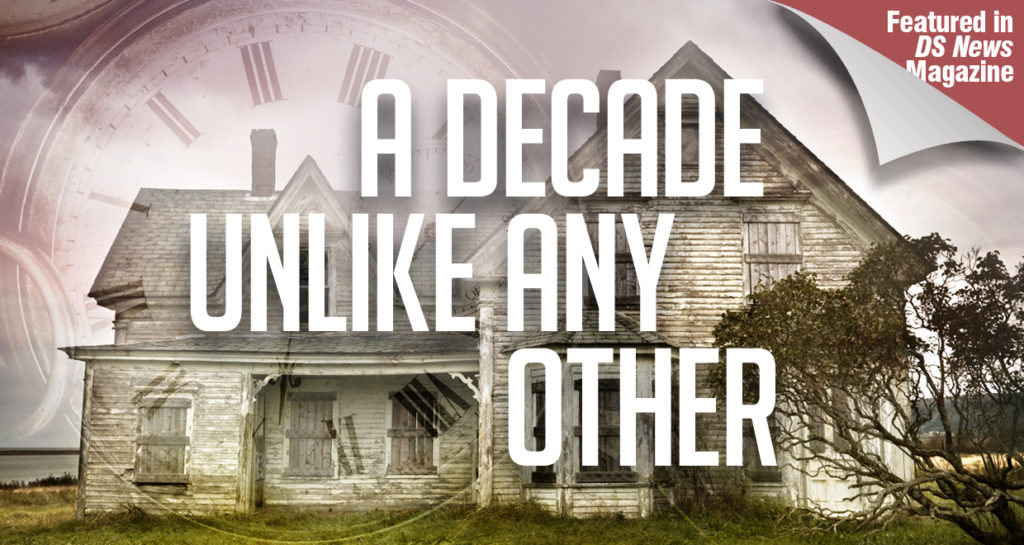 Editor's note: This story originally appeared in the July issue of DS News, out now.

The lead-up to and result of the collapse of the housing industry in 2008 has been documented and discussed by industry pundits, politicians, regulators, and technologists for years now. Even Hollywood has chimed in with films like The Big Short. But as the industry now marks a full decade since the beginning of the Great Recession, what are some key takeaways and tangible, valuable lessons learned for lenders, borrowers, service providers, and others as we move forward?

One significant effect of the recession is many of the mortgage professionals working in 2008 are simply no longer part of the industry today, which isn’t surprising considering the sheer volume of mortgage businesses that was forced to shut down. The scale of this industry attrition was perhaps most clearly illustrated through the now infamous “Implode-o-Meter,” which documented the closing of more than 380 mortgage lenders between 2006 and 2012 on ML-Implode.com. In many ways, the industry experienced a massive “brain drain” over the past 10 years that it has yet to fully overcome.

To truly understand where the mortgage industry has been and where it’s headed, it’s important to understand what the environment was like before the collapse.

The early 2000s was a time of consistently falling mortgage interest rates, which fueled a wave of refinance volume. Many homeowners became—in essence—serial refinancers, always chasing the lower rate. This led to increased levels of competition among lenders to secure these deals, and the introduction of new loan products like no-cost refinance loans. This, in turn, appealed to borrowers as a “free refinance” option, and cash-out refinances boomed also. Some thought of their homes as a limitless ATM.

One problem that developed during this time was the way many lenders managed this huge volume and the existence of a “front door” and “back door” delivery channel, which were often at odds with each other. Amy Crews Cutts, now a Chief Economist at Equifax, worked in a similar capacity at Freddie Mac at the time and explained it this way: “A borrower might go directly to their existing lender for a no-cost refinance only to be told that the lender did not offer that product. The borrower would then approach a mortgage broker, who would put the deal together. At closing, the borrower would learn that very same lender who initially said the no-cost option was not available was funding the refinance deal through the broker, paying the broker a large fee.

“Many lenders had both a ‘front door’ and a ‘backdoor,’ and they were competing against each other, which led to a race to the bottom that was ultimately unsustainable,” Cutts said.

The mortgage insurers also felt pressure because many of the loans were nontraditional, and structured in a way that avoided mortgage insurance. So in response, where they had traditionally served as a voice of reason, they loosened their standards to remain relevant and benefit from the growth in the market. Wall Street compounded the problem by investing heavily in these loans, bundling them together as collateralized debt obligations, which were held off of banks’ balance sheets under new Generally Accepted Accounting Principles rules. This meant they, for the most part, didn’t have hold capital against these assets. This proved to be a fatal error as there was a tremendous incentive to overleverage. The result was that rather than building portfolios around the standard, 30-year, fixed-rate mortgages, investment banks essentially took high-risk mortgages and packaged them to look like high-yield-low-risk bonds that were in hindsight systemically toxic.

In many ways, the canary in the coal mine was the abandonment of traditional underwriting processes used to evaluate borrowers for creditworthiness. Mortgage loan underwriting had traditionally relied on the three Cs: credit, collateral, and capacity. During the pre-crisis boom, it generally shifted to just one C: credit. Collateral in the form of down payments was no longer considered necessary in many cases, as rapidly rising home values would quickly make up for the lack of equity at the start. Capacity also was frequently abandoned as a requirement as long as the borrower said they made sufficient income. This placed a misguided trust in credit alone, especially credit scores, to discern those who would pay from those who would not. Credit scores, like all statistical models, are predicated on the conditions remaining as they were in the past, and in this case, that past involved comprehensive underwriting. Without the collateral and capacity pieces, credit was no longer an accurate indicator of risk, and the result was a global catastrophe.

Lastly, participants in the real estate business—real estate agents, brokers, underwriters, appraisers, loan officers, insurers, and so on, were generally rewarded on getting to “yes” regardless of whether the loan terms or home was appropriate for the consumer. In the most troubling cases, borrowers were encouraged to go well beyond what they could reasonably afford because the lender agent was being paid more for higher-risk loans.

“In hindsight, it often appears that throughout the process, virtually everyone that a borrower would have traditionally turned to for help was not always acting in their best interest,” Cutts said. “Did some borrowers overreach to skip the starter home to go straight to the dream home? Absolutely. They were certainly guilty of dreaming, but it’s important to recognize that nearly everybody else was an enabler.”

Today, the industry is benefiting from a continuation of historically low (although rising) mortgage interest rates coupled with a stronger overall economy and lower unemployment. Home prices have recovered in most areas to the point that they are now eclipsing the record prerecession values.

A host of regulatory requirements (most notably, Truth in Lending Act regulations and Fannie Mae Day 1 Certainty™) have provided higher levels of transparency and understanding for borrowers while introducing a new level of operational complexity for lenders and servicers.

Fannie Mae’s Day 1 Certainty™ has pushed lenders, at the point of sale, to look beyond the credit score and incorporate additional data points like income, asset, and employment validation to better evaluate the actual creditworthiness of borrowers. Automation has dramatically impacted how this information then feeds into—and significantly expedites—the origination process itself. Because lenders can onboard a borrower by phone, online, or mobile, they are now able to readily confirm that borrower’s information (including W-2, lines of credit, bank statements, etc.), moving qualified borrowers through the pipeline much faster.

As consumers continue to embrace the mobile channel, lenders’ access to income, employment, and asset data helps empower them to obtain approval for a residential mortgage loan within minutes via their smartphone. In a rising rate environment like today’s, this will enable lenders to counter some of the volume losses through operational savings while the speed of response will aid to position them much more competitively in the marketplace.

Additionally, compared to recent years, borrowers are doing their part concerning better managing their debt obligations and making their mortgage payments. This is reflected in the most recent delinquency data, which indicates that severe delinquencies (more than 90 days past due) are at the lowest level since September 2006, and that first mortgage write-offs are at the lowest level since early 2007.

The big issue today is a matter of housing inventory. Ten years ago, builders couldn’t build homes fast enough to meet demand (See Figure 2). Today, they are challenged to secure the lots required to build on. They are also forced to compete for labor, as one lasting result of the recession is that many of the skilled tradesmen have either left the U.S. employment market or are now involved in commercial construction. This is hindering the industry in many markets where qualified borrowers are simply unable to find homes to purchase–especially first-time homebuyers.

In March 2018, there were 50 million outstanding first mortgage loans with a total cumulative balance of $8.83 trillion. The historical industry high was a total cumulative balance of $9.04 trillion in November 2008. Despite a rising rate environment and projected lower origination volumes for 2018, the industry is still on track to eclipse the mark set 10 years ago by year’s end.

The future of the industry is tied to lenders’ ability to market to and serve the generation of “mobile first” consumers, or “digital natives.” Within just the last one to two years, the industry has seen tremendous progress regarding automation and efficiency and a true digital mortgage experience is finally within reach. By embracing the consumer preferences of this newest generation of homebuyers and by leveraging the capabilities of the mobile device, lenders are redefining what the origination process looks like. Borrowers expect to be able to apply instantly online or on their smartphones without the hassle of providing traditional documentation like paystubs, bank statements
and W-2 forms up front.

The industry is much closer to this reality than you might think. The future will see the lending process itself turned on its ear. One that shifts away from its traditional, reactionary mode (consumer finds a house, calls real estate agent who directs him or her to a lender) to one in which lenders leverage analytics to initiate the process with qualified consumers. Or even one in which consumers apply for a mortgage loan from their smartphone while touring a home, get qualified within minutes and successfully close within weeks. As an increasing number of fintechs and nontraditional lenders continue to penetrate the market, mortgage lenders will need to have the capabilities in place to secure this information through automation and build that into their workflows to thrive.

The last decade has seen the mortgage industry hit historic highs, followed by historic lows, and now rebound back toward landmark highs yet again. At the height of the previous boom, no mortgage CEO would have kept their job had they said, “we’re not going to match the market, we won’t do stated-income or pick-a-payment loans.” Today, such products are no longer available, and the emphasis is on a more efficient but robust financing model to help get consumers into homes they can afford. The lessons learned a decade ago remain at the forefront, and hopefully will never have to be relearned again.

Previous: Foreclosure Trends by the Numbers
Next: The Road Ahead for Legal League 100

Craig Crabtree brings more than 20 years' industry experience to his role, leveraging experience in origination, servicing, loss mitigation, and capital markets as he leads Equifax's mortgage business across all solution and product categories.