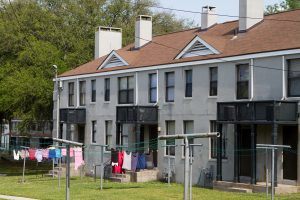 Among cites like Chicago, Houston, Charlotte, and Orlando, residents are seeing increased suburban poverty, but a report by Apartment List said the concern is whether they have the ability to face it head on.

From 2000 to 2015, the Joint Center on Housing Studies at Harvard University found that metro areas classified as “low density,” “medium density,” and “high density” had an increase in poverty. Though poverty is seen as an urban problem, the study showed better affordability in less dense areas drove families to the suburbs. Additionally, the gentrification of urban areas causes homes to become more expensive, thus pushing out poor families.

According to the 2017 State of the Nation’s Housing report, the largest share of poverty, 42.7 percent, still resides in dense urban areas. This is down 8.7 percent from 2000 when it was 51.4 percent. As the categories get less dense, the change in poverty increased with medium dense urban 3.8 percent, and least dense urban 5 percent.

Suburbs and rural areas experienced roughly 8,000 more high-poverty tracts compared to 15 years ago, which is a 59 percent increase. This is compared to the dense urban areas, which increased by 33.9 percent. However, no other area saw as big of an increase in the number of high-poverty areas as the least dense urban area category, which experienced 123.4 percent increase.

Although suburbanization of poverty isn’t a new concept, it’s something has become increasingly concentrated. In a book Apartment List referenced by Scott Allard called Places in Need, Allard said, “one of the realities in the rise of suburban poverty is that it hasn’t corresponded with a decrease in urban poverty. We just lack the capacity of tackle the problem in suburban areas.”