Home / Daily Dose / What Do Trade Tensions with China Mean for Housing?

What Do Trade Tensions with China Mean for Housing? 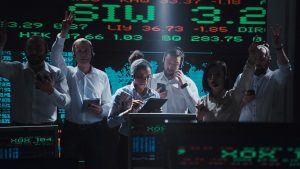 Monday was not a good day on Wall Street.

Following comments by President Donald Trump, who added logs to an already growing fire that is a trade war with China as he announced plans for a 10% tariff on $300 billion worth of Chinese imports to begin September 1, the Dow Jones fell 767 points, the S&P 500 slid almost 3%, and the Nasdaq dropped more than 3%.

Chinese officials then added gasoline to the fire, by letting the yuan drop to its lowest level against the U.S. dollar in more than a decade.

Trump tweeted the following in reaction to the yuan’s historic fall: “China dropped the price of their currency to an almost historic low. It’s called ‘currency manipulation.’ Are you listening Federal Reserve? This is a major violation, which will greatly weaken China over time!”

While the market began its recovery on Tuesday—Dow Jones traded 57 points higher, S&P 500 increased 0.3%, and the Nasdaq grew 0.4%—its impact on the housing market is a bit more complicated.

Hale added that while companies can initially absorb increased costs, prolonged tariffs will “eventually be passed onto consumers in the form of higher costs.”

“Even if the building materials can ultimately be sourced domestically, the higher costs will be passed on to consumers, making it more challenging for builders to build affordably,” she said.

The fall of the yuan could have a positive impact on the U.S. dollar, according to Kapfidze, who added an ongoing trade war will likely strengthen the U.S. dollar as investors seek greener pastures.

Information by the National Association of Realtors (NAR) found that the total value of homes purchased by foreign buyers from April 2018 to March 2019 fell 36%.

Investment by Chinese buyers saw the biggest decline, with investors buying $13.4 billion over the past year—a 56% annual decline.

“The trade war has already resulted in a significant devaluation of the yuan, which has a huge impact on the calculus of investing in real estate in the United States,” Hale said. “This will certainly dampen demand from Chinese buyers. It remains to be seen what impact this will have on buyers from other countries. The dollar and U.S. real estate continue to perform solidly, and this will attract investors looking for long-term performance despite the fact that they may face higher buy-in costs.”

While the market will attract foreign investors, Hale added that trade issues will have an impact on affordability. Although tariffs will raise prices of building materials and appliances, Hale said mortgage rates could fall due to economic turmoil.

“Mortgage rates have already declined notably and are likely to continue to remain low as long as the uncertainty and trade turmoil persists,” Hale said. “This will help buyers looking to finance their home purchase, a benefit to primary home buyers, who typically finance, whereas second homes, investors, and international buyers, who tend to use cash, may not buy as many homes at higher prices.”

CNBC reported Monday that the average rate for a 30-year fixed-rate mortgage fell to 3.7%.

Moving forward, Kapfidze said it best, noting, “nobody knows what will happen” and that time is running out for a deal that will support the economy in time for the 2020 election.

“Even if a deal were reached at the next scheduled meeting in September, it would take time for the details to be ironed out and thus the disruptions to supply chains would continue,” he said. “Thus, even a good deal could be viewed as a failure during the next election as it won’t have had time to work.”

Kapfidze said the President is “getting more desperate” for deeper and faster rate cuts from the Feds, who slashed rates for the first time in nearly a decade on July 31.

“Thus the overall rate situation for housing will improve, but the turmoil will a blow to confidence,” Kapfidze said. “Confidence should trump rates and thus I’d expect some weakness in housing from this point.”