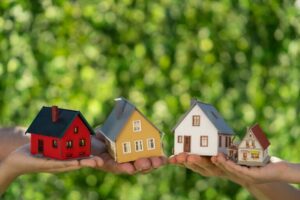 According to the latest RE/MAX Housing Report, a double-digit drop in home sales from June to July fueled a double-digit increase in homes for sale, triggering the first decline in the Median Sales Price since January.

Following a period of continual contraction in recent years, inventory jumped for the fourth consecutive month. There were 13.3% more homes for sale than in June and 30.4% more than a year ago. Months Supply of Inventory has doubled since May and is now at 1.8, while Days on Market was 24. New listings, however, dropped 7.8% compared to June and 7.2% compared to July 2021.

"It's an exciting time to be a homebuyer. For the first time in years, we're seeing sustained inventory gains and the slowing of home price appreciation," said Nick Bailey, President and CEO. "The market is rebalancing after favoring sellers for so long. There's still ground to make up with new construction, but the change in recent months has brought some much needed relief to buyers. And sellers still have it good, too. A calming market doesn't mean a stoppage – and there are plenty of benefits to being on that side of the equation."

"The housing market in Vermont has stayed strong favoring sellers. Since January, we are still seeing values in Chittenden County rise for both single-family and townhouse-condo sales," said RE/MAX North Professionals real estate agent Rich Gardner, who is based in Colchester, Vermont.

Highlights and the local markets leading various metrics for July include:

New Listings Of the 53 metro areas surveyed in July 2022, the number of newly listed homes is down 7.8% compared to June 2022 and down 7.2% compared to July 2021. The markets with the biggest decrease in year-over-year new listings percentage were:

Leading the year-over-year new listings percentage increase were in:

If it's less than 100%, the home sold for less than the list price. The metro areas with the lowest Close-to-List Price Ratio were Coeur d'Alene, Idaho and Miami, Florida, tied at 97%, followed by another tie between Bozeman, Montana and New Orleans, Louisiana at 98%. The highest Close-to-List Price Ratios were in Burlington, Vermont at 105%, followed by a five-way tie between Boston, Massachusetts, Hartford, Connecticut, Manchester, New Hampshire, Richmond, Virginia, and San Francisco, California at 104%.