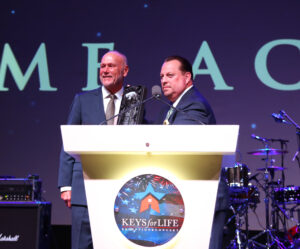 On Monday evening, the second full day of the 2022 Five Star Conference concluded with the annual Keys for Life Reception and Concert, presented by Host sponsor Auction.com. As in year's past, the event opened with a State of the Industry speech from Ed Delgado, AMP, Managing Director, Mortgage Policy Advisors; Chairman, Five Star Global, followed by the presentation of the 2022 Lifetime Achievement Award, a charity auction benefitting Operation Homefront and a check presentation from Auction.com, and a concluding concert from musical act Sugar Ray.

The ceremony then continued with the presentation of the 2022 Five Star Lifetime Achievement Award to Wes Iseley, Senior Managing Director, Carrington Holding Company, LLC. As a Senior Managing Director at Carrington, Iseley is an accomplished and strategic leader with deep expertise in high-touch consumer finance, mortgage lending, residential real estate, and mortgage servicing. After joining Carrington in 2009, he has held several senior leadership positions and consistently led large consumer and financial organizations to growth and profitability. Iseley joined Carrington in 2009 and has helped the firm become a Top-10 GNMA Seller-Servicer-Issuer and one of largest non-bank lenders and servicers in the country. He has P&L responsibility for Vylla’s 35 states and 1,100 real estate agent footprint, as well as Vylla’s nationwide title operations. He previously held leadership positions with Saxon Home Mortgage, Fremont General, and CitiFinancial. 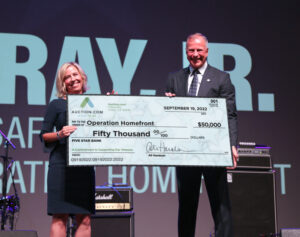 Event MC Delgado then transitioned into a portion of the event focused on Operation Homefront, "a national 501(c)(3) nonprofit whose mission is to build strong, stable, and secure military families so they can thrive—not simply struggle to get by—in the communities they have worked so hard to protect." While the ceremony has historically included the awarding of mortgage-free homes to military families, Delgado explained how ongoing supply shortages precluded that this year. Delgado also spoke to the challenges Operation Homefront is facing in the current housing environment, and why the work it does is as critical as ever.

Operation Homefront President & CEO John I. Pray, Jr., Brig. Gen., USAF, (Ret.), then took to the stage to accept a check donation to the organization on behalf of Auction.com, as presented by Ali Haralson, President of Auction.com. This then transitioned into a charity auction for guitars autographed by musical act Sugar Ray, who then closed out the evening with a concert performance.