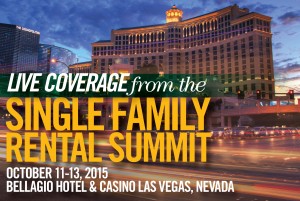 [1]One of the hot topics on Monday at a panel discussion at the Five Star Institute [2]'s Inaugural Single-Family Rental Summit [3] on Monday in Las Vegas was whether or not the SFR market has the longevity to survive or if it's going to die out.

The consensus among the many panelists over the two-hour Property Acquisition Lab is that the SFR market is here to stay despite some naysayers who still don't believe the market can survive despite so many companies experiencing widespread success in the SFR space.

"This is not a flash in the pan," said Greg Rand, CEO of OwnAmerica [4], a hosting sponsor of the Summit. "This is a permanent asset class."

Rand, director of the Property Acquisition Lab, questioned the fact that the SFR market, despite experiencing what many are calling a "boom" in the last year or two, is still not generally recognized as a "viable" real estate market.

"This is the first time I've ever been around for the birth of an institutional asset class, so I don't know how long it's supposed to take for the world to recognize its viability," Rand said. "To me, it should have been instantaneous. Maybe this is the way it was back in the early '90s when office real estate and retail real estate and industrial became institutionalized. Maybe there were a lot of naysayers, and until it was proven beyond the shadow of a doubt it was going to be successful, people didn't get on board. Right now, the jury is still out for a lot of people who are watching from a distance. They're watching the stock prices or the public REITs, which aren't moving. They think because stock prices aren't moving, it's a dumb investment, and the asset class is not viable."

The naysayers who do not believe in the longevity of the SFR market are simply not seeing the bigger picture, Rand said.

"This is not a flash in the pan. This is a permanent asset class."

The naysayers also consist of members of the media who do not have a desire to understand the market very deeply, Rand said. In fact, he said the business media has always been skeptical of the entire housing market, not just single-family rentals.

"When the business media started talking about the housing market, it was always treated like an underdog. There was a huge amount of skepticism," Rand said. "The housing market was a meltdown, until it recovered. They're surprised it recovered. That was not a surprise. Then the market began to improve and the way the story was presented was 'Opportunity's over, the market is improving' as opposed to 'That was a good investment. The market is improving.' There are a lot of people for whatever reason are willing to proclaim that it's never going to work and therefore they anchor themselves in a negative outcome, and therefore they become pessimists and they're rooting against the success  of it."

New sources of capital have come into the SFR space but have different expectations, which is great for the market because some cities haven't even begun to be tapped yet, according to Rand. The Northeast, the mid-Atlantic, a lot of California, and the Pacific Northwest are just a few examples, he said.

"The reason is the fundamentals that you get in Georgia, or Florida, or the Carolinas, or Texas, appeal to the investors that have been in the first part of this institutional trend," Rand said. "Many in the next wave have different expectations, which means different markets emerge. For example, you can buy a house in the Washington, D.C. suburbs. If you look at all the fundamentals of the D.C. suburbs, there has not even been a whiff of a recession in that market. Unemployment is down to 3 percent, the federal government and all the services are around there. It is the job center of the country. Home price appreciation is at 3 and 4 percent every year going back 20 years. But you can't get any better than a 4 percent yield there, so nobody's buying there.

"On one hand, new sources of capital with different expectations means it opens up more geographies because there's a diversity of business plans. More foreign investors are buying $3 million luxury condos for their kids to live in, because they don't have any other way to invest in U.S. housing, so they buy a house or a condo in Manhattan or San Francisco. It's not very smart, but no one's really bridged that gap yet."

Editor's note: The Five Star Institute is the parent company of DS News, DSNews.com, The MReport, and TheMReport.com.