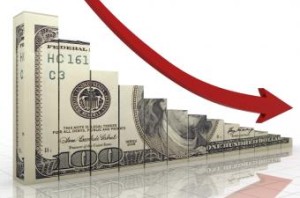 According to ATTOM Data, profit margins on median-priced single-family homes and condominiums across the country decreased to 54.6% as home prices declined for the first time in nearly three years.

The decrease in typical profit margins from 57.6% in the prior quarter; this drop coincided with a 3% drop in the median national home value, which now stands at $340,000.

"Rapidly-rising mortgage rates have not only resulted in fewer home sales, but have begun to impact home prices as well," said Rick Sharga, EVP of Market Intelligence at ATTOM. "With rates the highest they've been in over 20 years, homebuyers face serious affordability challenges, with monthly payments in some markets up 50% year-over-year. It's very likely that home prices will continue to weaken in many markets in the coming months."

On a yearly basis, the typical investment return for home sellers remained above levels recorded a year prior during the third quarter of 2021 which stood at 48.8%. The national median home price also stayed near its all-time high—more than double where it stood a decade earlier. “But the investment-return decline during this year's summertime home-selling season marked the largest quarterly downturn since 2011, when the nation was mired in the aftereffects of the Great Recession that hit in the late 2000s,” ATTOM wrote in its report. “The third-quarter reversal also represented the first time since 2010 that seller returns went down from a second quarter to a third quarter period.”

Gross profits also decreased from the second quarter to the third quarter of 2022, dropping 6% on the typical single-family home and condo sale across the country to $120,100. That quarterly decrease was the largest since early 2017.

The decrease in third quarter profits came amid growing signs and speculation that the market will face a significant downturn after a decade-long housing boom. At the same time, average mortgage rates have doubled in the past year and have now eclipsed 6% for a 30-year fixed mortgage. The high rate of inflation and a recent stock market slump have not helped the situation either; foreclosure activity by lenders has also quietly doubled over the past year.

“Those forces have raised home-ownership costs for buyers, cut into resources available for down payments on purchases and eaten into overall household budgets,” ATTOM wrote. “They also have boosted the supply of homes for sale, putting further downward pressure on prices.”

Typical profit margins—the percent change between median purchase and resale prices—decreased from the second quarter of 2022 to the third quarter of 2022 in 127 (68%) of the 186 metropolitan statistical areas around the U.S. with sufficient data to analyze. Typical profit margins increased quarterly in just 59 of the 186 metro areas analyzed (32%).

Median home prices in the third quarter of 2022 decreased from the prior quarter or stayed the same in 98 (53%) of the 186 metro areas with enough data to analyze, however, they were still up annually in 180 of those metros (97%).

"If the Federal Reserve's objective was to slow down the housing market, it has succeeded spectacularly," noted Sharga. "The market has gone from double digit annual home price appreciation to below 3%, and declining quarter-over-quarter prices. But the impact of 6-7% mortgage rates means that many homes are still out of the reach of prospective buyers, even with prices declining slightly."

The report also found that the average home seller during the third quarter of 2022 had owned their home for an average of 5.98 years, up from the 5.84 years from the second quarter, but down from 6.28 years on a yearly basis.

Home sales following foreclosures by banks and other lenders again represented just 1% of all single-family home and condo sales in the third quarter of 2022—tied for the lowest portion since at least 2000.

Click here to read the report in its entirety, including breakdowns of some of the trending hotspots across the country.